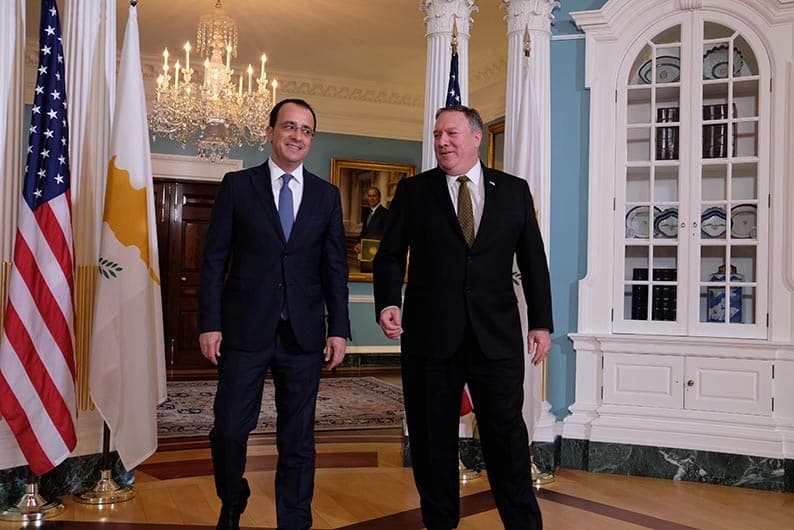 FROM THE coverage given to foreign minister Nicos Christodoulides’ visit to the US last week by the state broadcaster Rik, you would have thought he was in Washington to raise his personal profile rather than to discuss important strategic agreements with the Yanks.

The lead story on Rik radio news last Monday morning was that Christodoulides was arriving in Washington in the evening and that on Tuesday afternoon he would meet the US Secretary of State Mike Pompeo as well as “high-ranking US officials” (Wess Mitchell and Francis Fannon). He was also scheduled to meet the US permanent representative at the UN Nikki Haley in New York.

On Wednesday, Rik reported he would go to the White House for a meeting with National Security Advisor John Bolton, while on Thursday he would attend a dinner hosted by his counterparts for “ten personalities.” It gave no details about what type of personalities would attend, but it was clear that our FM now qualified as a “personality” having received an invitation to dinner from Pompeo.

This had to be reported because Nicos, understandably, wanted everyone back home to know that he was one of just 10 personalities that had been invited to dinner by the Secretary of State. Notice was served that the smooth-talking, churchgoing Paphite had arrived on the world stage. Next stop, the presidency of the Republic of Kyproulla.

HOW LONG Prez Nik will tolerate his foreign minister hogging the limelight is another matter. If he listens to Rik’s Trito news in the morning, he would have been disgusted to hear that the main news item on Wednesday morning was not his Tuesday night news conference about loose federation, but his FM’s meetings in Washington.

If there was anything important to report about the younger Nicos’ meeting with Pompeo, this would have been understandable, but all we were told was the US supported the efforts to find a Cyprus settlement and recognised the Republic’s right to exploit its hydrocarbons. Hardly big news justifying relegating the loose federation nonsense uttered by the prez to secondary importance.

What is our world coming to when the state broadcaster gives the FM more importance than the prez? Is it because Nicos the Younger is now a personality that has dinner at Chez Pompeo or has he persuaded the Rik news bosses he is Makarios IV. There is a long tradition at Rik, stretching back to 1960, of making anyone called Makarios its lead news story.

Christodoulides might only be called Makarios by our disreputable establishment, but he has many things in common with the Ethnarch. He is also from Paphos, he is a devout churchgoer, entertains delusions of grandeur, has the gift of the garb and believes Kyproulla is a regional power.

AFTER the meeting with Pompeo, Christodoulides said they discussed three issues – strengthening bilateral relations, the Cyprob and regional developments. The Yanks said nothing apart from the platitudes about hydrocarbons and the Cyprob that we have heard hundreds of times.

Poor Nicos had tried to get the Yanks to say something meaningful, but failed. According to CyBC, “a source at the State Department declined to comment on information that Christodoulides and Pompeo would announce the intention of the two countries to start a strategic dialogue.”

This non-news was before the meeting and given that no such announcement was made after the meeting we can only assume the source of the information was none other than Nicos and the question was asked by a friendly Cypriot hack. Having failed to get an announcement on the strategic dialogue, the FM found other ways to exhibit his delusions of grandeur and repeat the joke that our midget country has a role to play in regional security.

Speaking after his meeting with Bolton, Makarios IV said: “It is important it is recognised that apart from the Cyprus problem and the desire for a solution, the Cyprus Republic is recognised (sic) as a country that can offer solutions to the challenges of the region.”

We have been failing to find a solution to the challenge of our own problem for 50 years, but Makarios IV will offer solutions to all other challenges of the region starting with Syria.

APART from offering to find solutions for the challenges of the region, Nicos also did a sales pitch for the prez’s trilateral alliances, also known as menages a trois diplomatique. On the issue of the trilateral alliances, “there is great American interest, but this is focused on specific issues – mainly security – and not for one of the tri-laterals to evolve into a quadrilateral.”

Even though the Yanks will not be joining any of Nik’s alliances, our FM was undeterred and he invited Pompeo and Mitchell to attend one of the three meetings scheduled for December. On Saturday, Christodoulides expressed the view that by the end of December there would be “American participation in the tri-partite formations of the government.”

He did not say if the US would be represented by Pompeo or Mitchell. In fairness, it is President Trump that should be invited because the tripartite meetings are for heads of government and not foreign ministers, but Nicos will be lucky if he gets a State Department filing clerk at one of December’s threesomes.

PREZ Nik’s eagerly-awaited TV news conference turned out to be a snooze conference as he unveiled his latest delaying tactic, the decentralised or loose federation. This would allow the two sides to return to the negotiating table to decide which powers they will take away from the federal government and give to constituent states.

But it will not be as simple as that, because Nik unveiled another ingenious proposal – he would drastically reduce the federal decisions requiring Turkish Cypriots to only those that are of vital importance to their interests. It could take a few years to reach a decision on which issues are of vital importance to the interest of the TCs, assuming there is more than a zero per cent probability they would agree to discuss it.

Regardless of this, the Prez decided the TCs should not have a say on energy policy and this has absolutely nothing to do with a refusal of our politicians to share kickbacks and commissions from the oil companies with them. As he asked on Tuesday evening, if approval for the East Med pipeline that would supposedly take our gas to Greece was brought to cabinet, “would there be a positive Turkish Cypriot vote,” given that they believe the pipeline should pass through Turkey?

So, the TCs will have no say on energy matters, which would involve billions of bucks, so they would not be able to veto the East Med pipeline, which will never happen and prompted one gas expert to describe it as the East Med pipe dream.

THE MUDDLED-UP thinking displayed by Nik on Tuesday was exemplified by the following assertion: “As a responsible leader I cannot ignore the dangers deriving from the extension of the deadlock, which is why I have remained inactive, but at the same time I cannot accept a solution that would lead us to a dysfunctional state. The ignoring of reasonable concerns could lead to an agreement between leaders, but at the same time lead to disregard of the leaders with a second conclusively catastrophic rejection by the people.”

Why does he not just say directly, ‘I want a two-state solution’, and cut all this nonsense. Not only has he not cut the nonsense, but addressing the Congress of the European People’ Party on Friday, he reverted to the old melodramatic Cyprob rhetoric. Referring to the division of the island, he said it was, “in effect a European problem, an open wound for Europe.” Healing this wound would contribute significantly to a stronger Europe, said Nik. But we do not want it to heal completely because we want a loose federation.

Our View: Anastasiades sheds light on why two-state solution appeals to him