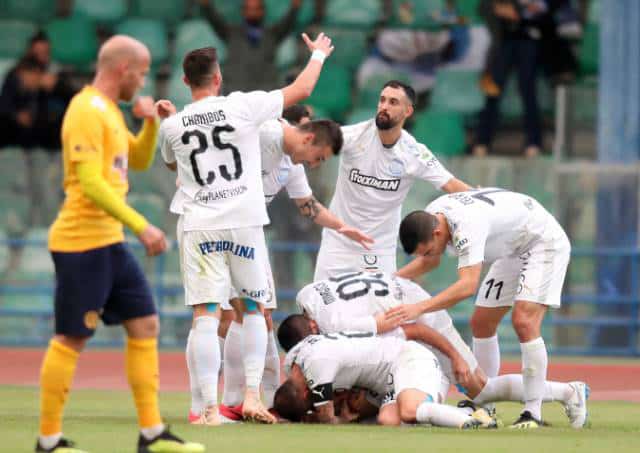 Apollon were the big winners in the Limassol derby on Sunday, defeating leaders AEL 3-0 to move to within three points off the top of the table and with a game in hand.

Sandwiched between the two Limassol teams, and two points off the top, are Apoel who hit three without reply against Enosis.

The Limassol derby proved to be a stroll in the park for Apollon who defeated their fellow Limassoians and leaders with consummate ease.

Apollon, who also hit the post and bar four times for the second successive game, were in complete control, especially after they had taken the lead in the 14th minute through Zelaya after the Ael defence failed to clear the danger.

Apollon scored their second in similar fashion nine minutes later after the ball fell to Vassiliou after Zelaya’s initial shot was charged down.

Torres and then Texeira with the follow up, failed to reduce the deficit late in the half and give their team something to fight for in the second half.

Apollon buckled up after the interval to preserve their two-goal lead and even though AEL tried to push forward all they managed were a couple of long range efforts that were comfortably saved by Apollon goalkeeper Bruno Vale.

With AEL pushing more players forward they made themselves vulnerable at the back. They escaped the worst twice but 15 minutes from the end Facundo Perreira made sure of the win with a powerful header.

Elsewhere, the Famagusta derby between Anorthosis and Nea Salamina was settled by a last minute header by Anorthosis captain Joao Victor.
It was a dull game with Anorthosis bossing possession but unable to pierce a well-organised Nea Salamina backline.

Going forward Salamina offered precious little and all they had to show was a long range effort by Noor that was pushed away by rookie goalkeeper Demetriou.

Even though Apoel did not set the stadium alight with their performance they more than deserved their 3-0 win over first division newcomers Enosis Neon Paralimniou.

Young Brazilian Natel opened the score in the 26th minute with a fierce drive from the edge of the box while Giorgos Efraim doubled the score for the champions on the stroke of half-time with another powerful shot.

Enosis did improve after the break with Apoel more than happy to allow them possession but they could not fashion any clear-cut opportunities.

Two minutes from the end defender Nicolas Ioannou rose above everyone else to wrap up the score for his team.

Ermis Aradippou scored an impressive 3-0 win over Pafos FC, moving off the foot of the table and into tenth place.

Taralides opened the score for Ermis in the 19th minute after Pafos FC misjudged the flight of the ball and allowed it to sneak past him off the post.

Pafos Fc’s Swiss goalkeeper was clearly at fault for the second goal as he was beaten at his near post while five minutes before half time Martynyuk converted a penalty to seal the three points for Ermis.

Omonia’s (short) revival under new coach Yiannis Anastasiou continued with their second consecutive win, this time against Doxa by 2-1.

Doxa led with a late first-half goal by Carlos but Omonia fought back and equalised through Ramirez five minutes into the second half while 12 minutes later Soares scored the winner after good play by Gomez and Ramirez.

In the final game of the weekend AEK had to wait until after the break to score past bottom club Alki with Ivan Triscovski finding the net in the 49th minute. Katala and Taulemmeuse got the other two to keep the Larnaca team in touch with the top three.

Terms of reference to be discussed at National Council