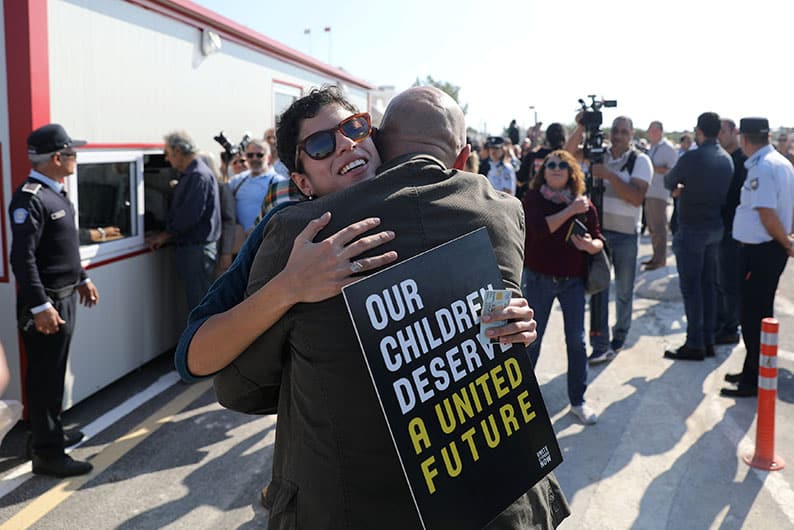 More than three years after the Cypriot leaders agreed to open checkpoints at Dherynia on the east coast and Lefka-Aplikli some 50km from the capital, hundreds of people from both sides queued up early on Monday to finally make the long-awaited crossing, others to express their opposition.

For most it was another step towards peace and reconciliation, for others such as those from far-right Elam, politically unacceptable, and for the father of a man shot dead close to the Dherynia crossing during a demonstration in August 1996, it was like killing his son all over again, he told reporters as he stood on the road bearing a photo of his son Solomos Solomou.

There have also been grumblings from some local businesses concerned that more locals and tourists would shop in the north and take away their custom, especially since the fall in the Turkish lira. Also, in opposition, the Solidarity party said on Monday, the day marked another nail in the coffin of the long-standing struggles of Cypriot Hellenism for the return of Famagusta, while ruling Disy said such confidence-building measures were necessary to create a climate of trust and co-operation between the two communities.

“The opening of crossings is one of the most tangible confidence-building measures that help this effort,” the party said.

The two openings on Monday, which took place at noon, bring the total crossing points to nine along the island’s 180km long buffer zone.

While the opening of at Lefka was low-key, hundreds queued up at Dherynia, just a few kilometres from the town of Famagusta in the north, to cross both by car and on foot.

Dherynia mayor Andros Karayiannis, who was visibly moved according to CNA, said for years he had worked for the opening of the crossing. He was greeted by the Turkish Cypriot mayor of Famagusta and was presented with olive saplings which Karayiannis promised to plant close to the checkpoint.
He said he hoped that peace and reconciliation would come as a result of the opening of another crossing point. “I never expected that our wish for the opening of the crossing would be embraced by so many people,” he said, adding that this was a crucial step towards reunification.

Dherynia is only two kilometres from Famagusta town in the north. The crossing point, located at Famagusta Avenue, leads straight into the centre. However, residents of the Famagusta district in the government-controlled areas have had to travel through the Vrysoules checkpoint and go all the way round, making it a 40-minute journey.

Famagusta mayor Alexis Galanos, during a separate news conference said the opening of the Dherynia crossing was an opportunity for Greek Cypriots to claim the return of the fenced-off ghost town of Varosha in the context of the reunification process.

“The crossings are opening so that they can guide us to the essence, to the solution of the Cyprus problem,” Galanos said, “and to the implementation of the UN resolutions,” which clarify Turkey’s obligation to allow access to the city of Famagusta.

The opening of the Dherynia crossing was not an end in itself, Galanos said. “But going through this road we see the tragedy in its entirety.”

He urged the government to urgently address the issue of Famagusta as part of the broader solution of the Cyprus problem. “We personally call on President Anastasiades and on the UN Secretary-General to assume his responsibilities in the implementation of Security Council resolutions,” Galanos added. “The issue of Famagusta’s opening is an international obligation of Turkey”.

Galanos accused the government of downplaying the return of Varosha and that it should seek this more aggressively, or at least insist on the entry of UN experts to assess reconstruction.

Galanos also said the opening of crossings should not be a cause for division among Greek Cypriots but should be viewed positively and used to further reunification.

In the north, Turkish Cypriot ‘foreign minister’ Kudret Ozersay posted on social media that the opening of the two crossings despite the delays was a positive development, not only in terms of economic mobility but also for increased dialogue. “After our government came into power, we supported as we had promised the opening of the crossing points and to make the arrangements,” he said.

Baris Burcu, the spokesman for Turkish Cypriot leader Mustafa Akinci, said that although three and a half years was a long time between when the decision was made to open the two crossings and the actual opening, they had done their best to get the job done. “Some problems were experienced due to the former government,” said Burcu, adding that it was hoped the new crossings would benefit everyone.

While the situation at Dherynia showed a mixed response, at the

Lefka-Apliki checkpoint, people from both sides were enthusiastic Turkish Cypriots greeted Greek Cypriots with citrus fruit and olive saplings during a short ceremony with dancing by the Turkish Cypriots.

Road works at Lefka-Apliki are still pending and will be completed in the next four months.
Lefka, a large mixed village in the north is 52km west of the capital. Nestled between mountains and sea, it connects with Karavostasi village (4km) and Xeros (around 4.5km), in the south with Apliki village and south-east with Skouriotisa.

Greek Cypriot head of the bicommunal Technical Committee on Crossing Points, Sotos Zackheos told CNA on Monday that everything that had been agreed by the leaders in May 2015 for the opening of both checkpoints had been implemented.
He said on Tuesday a meeting would take place during which the Greek Cypriot side would continue to table the need to open the Aglandjia– Piroi crossing as well as finding ways to overcome the isolation faced by the residents of Pyrgos Tilliria who are also cut off from the easy access to Nicosia they could have by cutting through the north if there was a crossing close by.

Federer falls flat against Nishikori, Anderson off to flyer