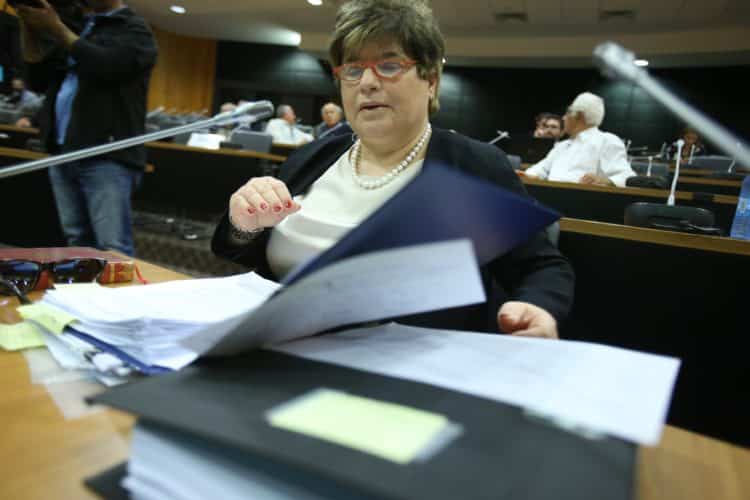 The governor told the inquiry probing the state bank’s demise that the wrong people, executives and board members had been appointed to guide the co-op after the 2013 crisis.

Georghadji said for an organisation to function properly and efficiently it must have a good product to sell and have the suitable people to sell it at a good price.

“All three were missing here.”

She said the Central Bank was concerned and met Finance Minister Harris Georgiades many times.

The minister “told us to sack them ourselves,” she said.

The governor said it was not easy to find and appoint six members belonging to political parties.

Changes to the co-op board had to go through the House finance committee and political parties would have their say.

The governor said the owner of the bank – in this case the state – was responsible for selecting the members of the board and parliament had a secondary role.

“If they cared why didn’t they sit with the minister and find the stars we have in Cyprus?”

She said in a well-governed society political parties have maximum responsibility,

“At a time when they were tearing their garments to save the co-op they should have been extra careful and sit together to find the most suitable, the best one, and put him in the position,” she said.

Asked whether the CBC could tell the state that certain members of the co-op board should not be appointed because they lacked experience, she said they did not believe the lender was in such a mess.

Of her own responsibility for not insisting on the matter, she replied: “mea culpa.”

Georghadji said the minister seemed to understand and share the CBC’s concerns “but it was like something held him back from going ahead and doing what, in my view, he considered to be right.”

The governor suggested that “he had not realised the scale of the impending catastrophe.”

She said the CBC tried “with suggestions, incitement, intimidation – in the good sense – to offer whatever we could.”

The governor censured political parties for dragging their feet in making the foreclosures and insolvency frameworks effective and questioned the rationale behind protecting primary residencies worth up to €350,000.

Georghadji told the panel that if they had dared suggest changing the framework earlier, people would be screaming for their heads.

“Setting a low level of protection for a poor family who has three children up to €100,000 is fine, yes, let’s protect them, its social policy,” she said, stressing that the decision to protect primary residences of up to €350,000 was simply wrong.

“I always wanted to say it in public to lose my head and get it over with,” she said, adding that she has four and half months left in office.

Of former co-op CEO Marios Clerides, who resigned in mid-2015 before Nicolas Hadjiyiannis took over, the governor said he spoke like a person who couldn’t take it any longer.

Hadjiyiannis was the last CEO of the co-op before it was split up and its good assets sold to Hellenic bank this summer.

Hellenic acquired a total balance sheet of €10.3bn of healthy assets (or €10bn after fair value and other adjustments), as well as certain businesses of Cyprus Cooperative Bank.

“In general, we felt Mr Clerides was a good asset for the co-op bank and tried to change his mind but to no avail.”

Georghadji said as regards experience, Clerides was a far better choice than Hadjiyiannis.

Plant of the Week: Poisonous plant’s major use to fight fleas

Lakatamia water supply to be cut for 32 hours next week