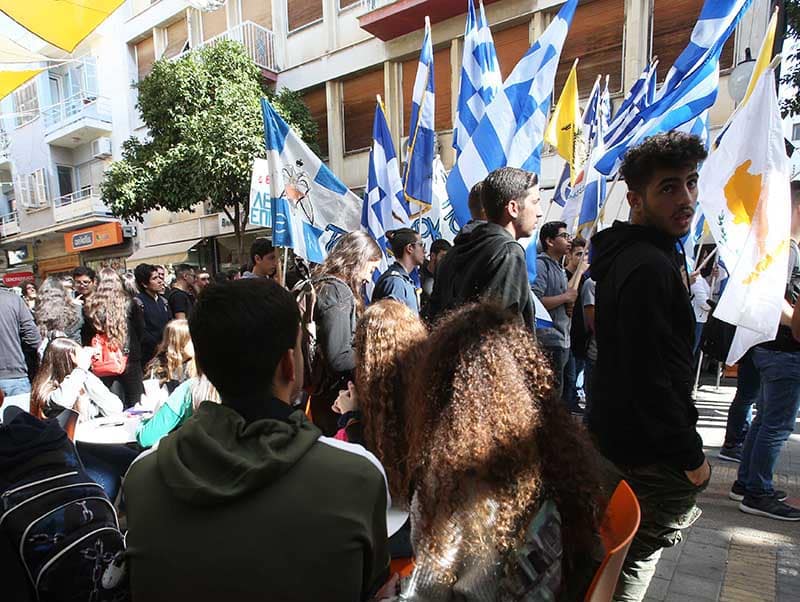 A series of protests and events were held on Thursday to condemn the 35th anniversary of the Unilateral Declaration of Independence (UDI) of the breakaway Turkish Cypriot state with the government calling on the leadership in the north to abandon its separatist aspirations.

Earlier, shortly after midday, Turkish military jets boomed over the capital Nicosia to signal the end of the military parade to celebrate the 1983 anniversary, as numerous protests mainly by students took place islandwide in condemnation of the creation of the ‘TRNC’ and calling for an end to the Turkish occupation.

Government spokesman Prodromos Prodromou said in a written statement it was the aim of President Nicos Anastasiades to end the occupation.

“We hope that instead of staging provocative celebrations… Turkey and the Turkish Cypriot leadership will demonstrate the necessary political will and goodwill… to resume the negotiations in order to reach a mutually acceptable, viable and functional solution to the Cyprus problem, which will reunite the people and our country with full independence, without occupation troops or dependencies from abroad,” the statement said.

The Greek foreign ministry also issued a statement saying Athens would never accept the fait accompli of the Turkish invasion and occupation “and will continue to contribute steadily and responsibly to the restoration of international legitimacy in Cyprus, which can only be achieved through the end of the occupation, the abolition of the anachronistic status of the guarantees and the reunification of Cyprus, on the basis of the decisions of the United Nations Security Council”.

In the north, a message sent by Turkish Foreign Minister Mevlut Cavusoglu to the Turkish Cypriot leadership through his Twitter account said: “Our country will always be on the side of the Turkish Cypriots as it was on the happy day of proclaiming independence. Happy birthday for the 35th anniversary of the founding of the TRNC.”

Turkish Vice President Fuat Oktay, who was in the north for the anniversary events, said that new ideas and proposals were needed in Cyprus and that approaches which ignore the existing “realities” on the island should be abandoned.

Addressing the ceremony prior to the military parade Oktay said Turkish Cypriots had been “supporting a solution and exhibiting a constructive approach for the past 50 years” and that there was no solution because of the “intransigent stance of the Greek Cypriots”.

“Our target is to ensure the political equality of the Turkish Cypriots and to guarantee their legitimate rights on the island, their security and prosperity,” he said.

Turkish Cypriot leader Mustafa Akinci in his address said the Turkish Cypriots would never accept being turned into a minority based on Greek Cypriot rhetoric that the new state “must be functional”.

“As I have often said before, the open-ended negotiating processes which are not result-oriented remain in the past. We will be ready to create a new federal partnership based on the existence of two politically equal founding states where sovereignty on the island will be originating from two equal sides.”

He added however that current conditions did not appear to offer much hope of that.

“Today there is still a mentality which tries to hide the real reasons for the collapse of the 1960 partnership Republic and to put the responsibility on the Turkish Cypriots,” he said.

Referring to the fact the sides have been asked to come up with terms of reference for new talks by the end of the year, Akinci said: “We will be constructive as always, but we will act to protect our rights until the end.”

King James rules over Chamberlain, set to conquer Jordan next

Premier League clubs agree on VAR from next season