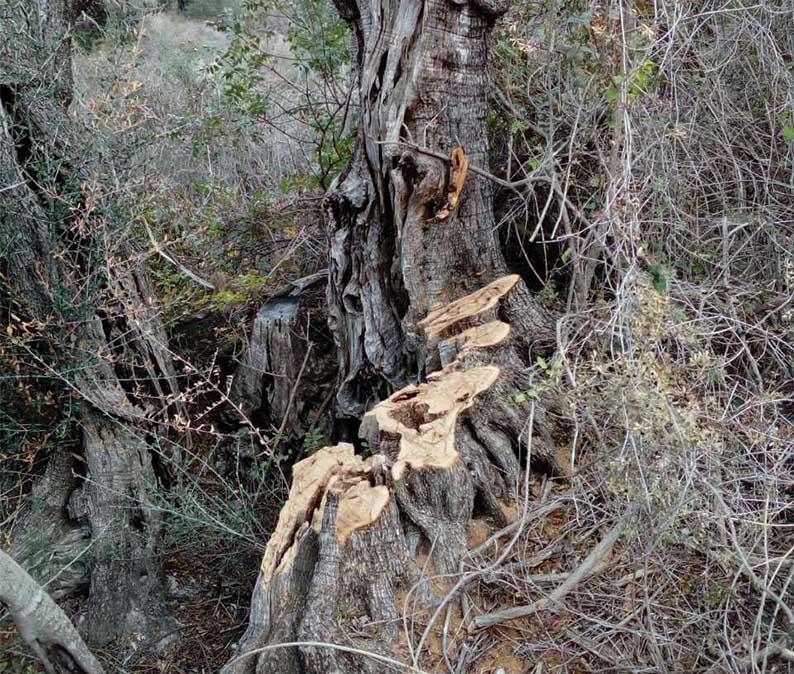 An old olive tree near Lefkara that was illegally cut down

Trees which are hundreds of years old are being cut down for firewood and making furniture in Lefkara local officials say.

The cut trees include olive and carob and the authorities are determined to take action to combat the illegal logging.

The municipality of Lefkara on Tuesday convened a meeting at its offices with the mayor, police, the game fund, the forestry department and the district administration in an attempt to find a solution.

“Within a few minutes by cutting a century-old tree, the history and the heritage of a place ends. And this calls for concrete action,” the mayor of Lefkara, Sofoclis Sofocleous, said on Thursday.

“There was another meeting six months ago,” said George Charalambous, who attended the meeting on behalf of the Green party. “They couldn’t do anything about the problem because they couldn’t find when the trees were cut down.

“Usually they find a lot of trees have been cut down after a storm in the evening, when nobody could hear the machine which is being used.”

Because of this, it has now been suggested that patrols by officers of the forestry department should be supported by frequent checks by the game fund and the police force as they are the only ones who work at night and during weekends, Charalambous explained.

Asked if there are problems with illegal logging in other areas, spokesman for the forestry department Andreas Christou replied it was not a serious issue elsewhere.

“We concentrate on individual cases rather than areas,” he said. “There are patrols and if someone informs us that there may be illegally cut logs in a house our forest officers and police have the right to inspect.”

The persons are than fined or taken to court.

Premier League clubs agree on VAR from next season