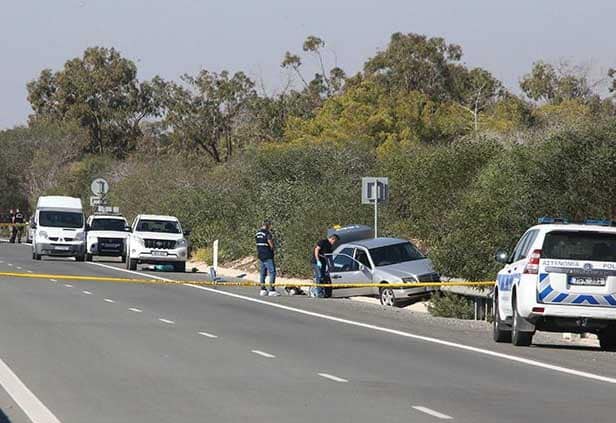 Famagusta district court on Thursday remanded in custody for eight days the four suspects arrested in connection with the November 1 murder of Gary Boris Christodoulou, found dead with two bullets to his head near the motorway just outside Ayia Napa.

Following a tense remand hearing, the court accepted there was enough evidence creating a reasonable suspicion that the four men were linked to the crime.

The four men, aged 27, 36, 44 and 35 have denied any connection to the murder. Famagusta police are investigating a case of conspiracy to murder and the premeditated murder of 33-year-old Christodoulou.

Following a tip-off from a member of the public late in the evening of November 1, police located the victim’s car which had been driven into a ditch next to the hard shoulder of the Rizoelia to Ayia Napa road motorway.

The window on the passenger’s side had been shattered by a firearm projectile, the lead police investigator told the court. The engine was running and the lights were on when police found the car.

Searching the area, police located the body of Christodoulou on the opposite side of the highway.

The post mortem revealed that the victim received four gunshots, two to the head and two to his torso. He was known to police in relation with past drugs cases.

The victim was also known to be on friendly terms with Panicos Pentafkas, who was sentenced to life imprisonment in connection with the June 2016 gangland shooting at an Ayia Napa restaurant where four people died.

In addition, one of the four suspects in the current case had been present at the restaurant that night and had been seriously injured.

Police secured testimony according to which this suspect had earlier warned Christodoulou to stop advertising an Ayia Napa nightclub controlled by the Pentafkas family, threatening to kill Christodoulou unless he complied.

According to the same information, on May 15 of this year Christodoulou received a phone call from a number registered to a relative of deceased businessman Theofanis Theofanous, who is believed to have been the target of the June 2016 rubout.

During that phone call, Christodoulou was asked to stop working for Pentafkas’ nightclub, or else.

From analysing CCTV footage from Ayia Napa, as well as phone communications data, police have since discovered the four suspects knew each other as well as the victim.

On the night of the murder, Christodoulou had paid a visit to the homes of two of the suspects, one of whom was described as his friend.

In his deposition, one of these two men said he had dinner with the victim at the former’s house. He said Christodoulou then left around 9pm, and that they did not have any contact after that.

But CCTV footage obtained by the police established that Christodoulou later returned to the same man’s house. The man, however, failed to mention this detail in his depositions.

Police also told the court that on the day prior to the murder, suspect no.1 asked suspect no.2 to obtain two mobile phones and a prepaid phone card.

Suspect no.1 subsequently handed over to suspect no.3 a new mobile phone and a prepaid phone card.

The purpose, police believe, was for a person whom the victim trusted to call Christodoulou and give him directions to a location where an unknown person or persons were lying in wait.

Police said the evidence points to a trap having been laid for Christodoulou by a person whom the deceased had considered a trusted friend.

In court, the lawyer representing three of the suspects lambasted the police investigator for presenting flimsy circumstantial evidence in a bid to implicate his clients.

The judge had to intervene when tempers flared after the lawyer called the police officer incompetent.

Security was tight in and around the courtroom, with riot squad officers equipped with firearms and bulletproof jackets.

UN still sees big risks in Syria, despite a lull in northwest