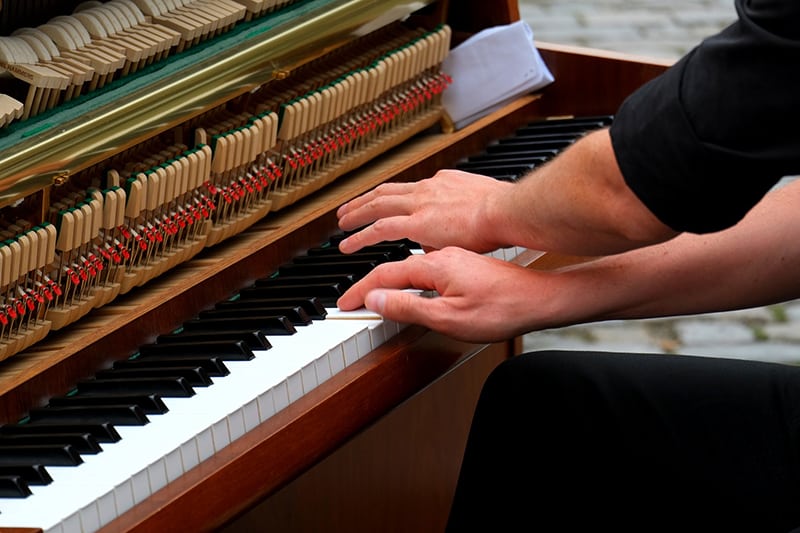 Have you ever been to a classical music concert and been allowed to eat and drink while enjoying the performance? In most cases, that’s strictly forbidden. Yet an upcoming event at Technopolis 20 is here to break that rule. 20 fingers, a cup of coffee and a delicious piece of cake will take the audience on a journey that’s going to wake up all senses.

The two pianists have been collaborating as a duo since 2002. Since then they have participated in festivals and given recitals in Europe and the Middle East. They often collaborate with orchestras in Cyprus and abroad performing piano concertos for two pianos. Apart from that, the duo also frequently give educational concerts for schools with in collaboration the ministry of education. Their repertoire usually includes works by Mozart, Schubert, Liszt, Brahms, Rachmaninoff as well as many contemporary composers.

On this occasion, the musicians will also include pieces by Debussy and Gershwin as well as many of those mentioned above.

Both performers are not shy of the stage. Borislav Alexandrov actually has his first piano recital where he collaborated as a soloist with the symphony orchestra at the age of eight, after only three years of classes.

He continued to exercise his passion throughout his childhood and went on to study at the National School of Music & Liubomir Pipkov Bulgaria and State Music Academy & Pantcho Vladigerov in Sofia, Bulgaria with Prof Dora Lazarova, and holds a Bachelor and Master Degree in Piano Performance with distinction.

As an adult, he has been awarded with prizes and medals from national and international piano and chamber music competitions and has performed widely in Europe and the Middle East, taking part in recitals and music festivals organised by the British Council, Cyprus Composer Society, Cyprus Opera Organization, Evangelia Tjiarri Foundation, Avantgarde Cultural Foundation and various embassies.

Alexandrov is no stranger to the island either. In fact, he has worked as a piano teacher at the Nicosia Music Lyceum and the European University since 2004.

Crossing paths somehow with Barislav’s story, Hadjithoma graduated from the State Music Academy & Pantcho Vladigerov in Sofia, Bulgaria holding a Bachelor and Master Degree in Piano Performance with distinction, as well as the European University Cyprus. She has also participated in similar competitions to Barislav and as well as being a piano teacher at the Nicosia Music Lyceum.

With a common history going way back and overlapping on many common grounds, Leoni and Barislav seem to be a duo meant to perform together.

In the unusual company of coffee and cake, classical music lovers in Paphos are invited to another enchanting evening at Technopolis 20. Just don’t forget to reserve your seat.

Turmoil in the wake of the draft agreement on Brexit

Giggs proud of Wales despite defeat