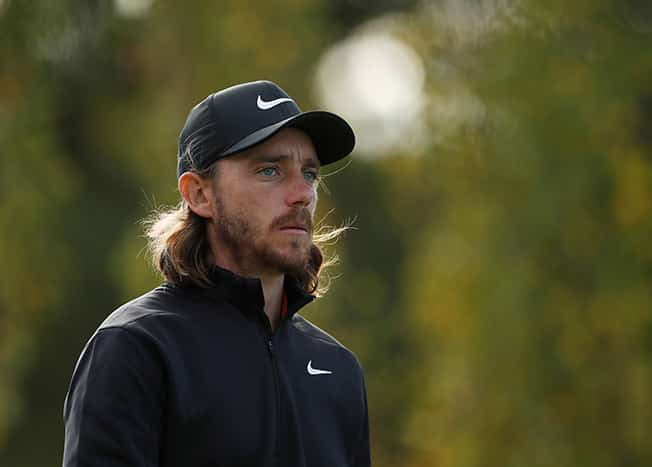 Tommy Fleetwood admitted his chances of retaining the Race to Dubai title had gone as past and present Masters champions Danny Willett and Patrick Reed set the pace in the DP World Tour Championship in Dubai.

Fleetwood needed to win the season-ending event to have any chance of overhauling Ryder Cup team-mate Francesco Molinari on the money list, but struggled to a third round of 74 at Jumeirah Golf Estates.

That left the 27-year-old from Southport just a shot ahead of Molinari, who returned a 70, but more significantly eight strokes behind Willett and Reed, who enjoyed a one-shot lead over Jordan Smith.

Lee Westwood, who is seeking back-to-back wins following his victory in Sun City last week, is two shots off the lead alongside halfway leader Matt Wallace and South Africa’s Dean Burmester, with Rory McIlroy five adrift after a 71 which included a double-bogey on the 17th.

“Today pretty much summed up the second half of the season,” Fleetwood said. “I’ve done plenty of good stuff in tournaments, and then days like today.

“But it is what it is. I’ll go home and I’ll spend time with my son tonight. At the end of the day, it’s just golf, but it does hurt when you have days like that.

“I feel the adrenaline might have gone now. I think you kind of know when your time’s up. I lasted within two days of the (end of the) season. Like I’ve said, it was always a stretch trying to win it.”

Willett has not tasted victory since winning his first major title at Augusta in April 2016 and was outside the world’s top 450 earlier this season following numerous injuries and a loss of form.

But the 31-year-old from Sheffield has also shown signs of improvement with three top-10 finishes and said recently he no longer felt like golf’s version of “Humpty Dumpty.”

“My main goal this year was not really a golfing goal, but body-wise,” Willett said after a third round of 68. “If I could finish the season healthier and fitter than I started the season, I would be somewhere near and that’s exactly what we’ve done.

“This is the sixth out of seven weeks playing golf. We’ve travelled all around the world trying to play a good bit, and it’s nice that my body feels as good now as it ever has, really.”

“I’m not going to lie it would be an amazing thing to win, but regardless of what happens, just looking more in the long-term of my career, really, is pretty good.”