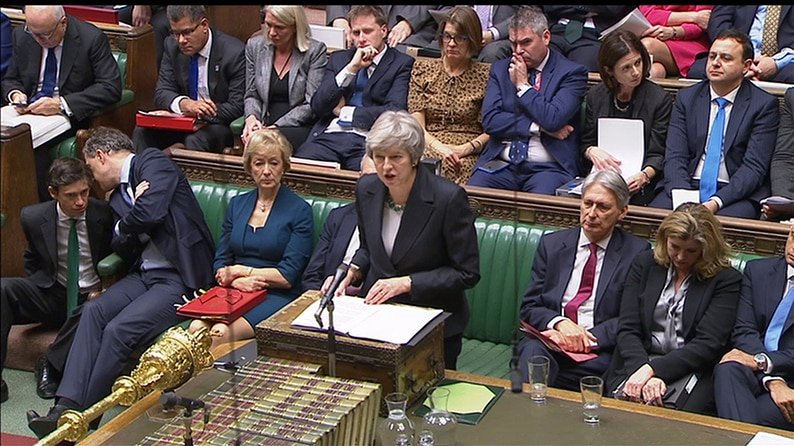 I could not help admiring Theresa May as she answered questions on the Brexit withdrawal agreement for three hours from a hostile parliament on Thursday morning.

After a difficult five-hour cabinet meeting on the Wednesday followed by ministerial resignations just before she rose to address members of parliament, she faced down her critics one by one, rejected calls to change course and showed grit and determination to fight and defeat any challenge to her leadership of her party and her country.

Her calculation is that she will do her job and bring the agreement before parliament for approval, and if members of parliament vote it down, on their heads be it. Most members will probably support it – kicking and screaming of course. An early general election is not on the cards as it needs a two thirds majority or a vote of no confidence, neither of which is likely to happen in the same way that turkeys do not vote for Christmas.

My admiration for her was matched by disgust at the ministers who stabbed her in the back over some legalistic weasel words in the Irish protocol of the agreement, which they know she had to accept to protect the 1998 Belfast peace accords whatever withdrawal alternative she chose.

But first things first because there is also a Cyprus protocol attached to the Brexit withdrawal agreement and this is the Cyprus Mail. Interestingly, the term ‘UK’ in the interpretation section includes the Sovereign Base Areas (SBA) in Cyprus. The Cyprus protocol on the SBA aims to preserve the current situation that will continue to be governed by EU law. The SBAs will be part of the EU’s customs territory and will be aligned with agricultural standards and excise regime of the Republic of Cyprus after the transitional period. The RoC will be responsible for implementation and enforcement in most areas except security and defence. Nothing too controversial there, although for obvious reasons British sovereignty over the bases in Cyprus is not as toxic as British sovereignty over Northern Ireland.

Ireland and Cyprus have always had interesting similarities because of the tribal nature of their politics. For Catholics and Protestants read Greeks and Turks and the problems of identity that derive from centuries-old enmities. There are, however, lessons for Cyprus because the crux of the Irish conundrum thrown up by Brexit is how to reconcile the retention of British sovereignty over Northern Ireland with the contribution of the EU legal order to the 1998 Belfast peace accords – a conundrum with which Cyprus is familiar.

The Irish protocol attached to the withdrawal agreement affirms that the 1998 peace accords need to be protected, and recognises that cooperation between Ireland and Northern Ireland is essential for reconciliation and requires full alignment of the rules of the internal market and customs that support and protect the 1998 peace accords.

On the other hand, in order to preserve British sovereignty over Northern Ireland the whole UK had to remain within a single customs territory – no bad thing in the eyes of business people – after the transition period between March 29, 2019 and the end of December 2020 unless an alternative arrangement is agreed. It is true that this is open ended because the UK will remain within a single customs territory, but there is a best endeavours obligation to conclude a trade agreement before December 2020 or after a one-off indeterminate extension of the transitional period.

As Theresa May said many times, Brexit will happen on March 29, 2019 when Britain will cease to be a member of the EU. Britain will then begin the withdrawal process during which she will gradually regain control of her borders, her laws and her money – the three key areas of loss of sovereign power the referendum was fought over that 17 million people voted to regain.

The prime minister believes very strongly that the withdrawal agreement delivers on the 2016 referendum result to leave the EU. In evaluating the agreement it is also important to remember that, as prime minister, Theresa May has to deliver the kind of Brexit that also takes into account the 16 million who wanted to remain, including those whose business and employment require good relations and frictionless trade with the EU.

Democracy is a lot more complex than the leave or remain question posed in the referendum.  What Theresa May is saying to her party and the country is that as long as Britain regains sovereign control of her borders, her laws and her money it is mission accomplished so far as the referendum result is concerned. Everything else was up for compromise in the best interests of the UK as a whole including those who voted remain.

Many people critical of the Brexit deal argue that the British people did not vote to leave the EU on the terms contained in the withdrawal agreement, and that there should now be a second referendum for people to vote on the actual deal. I too used to believe this as a democratic way forward.

But the prime minister’s argument is much more nuanced and a lot more democratic. Her stance is that she has had to deliver on the issues that persuaded most people to vote to leave the EU – to regain control of borders, laws and money –  but in respect of other issues on terms acceptable to those like businessmen and people in the City who voted remain, who are comfortable with Brexit if the UK stays close to Europe within a single customs territory to enable frictionless movement of goods to continue.

For me the only question mark hanging over the Brexit referendum result is an ethical one. There are aspects of the referendum campaign that are of great concern not so much on account of the cost and risks of Brexit, but more generally because of the vulnerability of direct democracy to fake news compared to indirect democracy.

According to a new book, Ethics for a Digital Era by Denni Elliot and my old best friend Edward Spence, information must be true, fair and reliable and must have an ethical dimension. It must not undermine but promote the rights of citizens and advance their well-being.

In the 2016 Brexit referendum in which the main concerns of the British people were about immigration and the money paid to the EU, they were sold two big lies. One was about the likelihood of large numbers of immigrants coming from Turkey and the other was that leaving would release £350 million to be spent on the NHS.

Despite the fact that Turkish immigrants are not very visible and places like Islington, Haringey and Hackney and their environs, where most Turkish people are concentrated, have become the coolest places in town to live, work and play, there is a visceral anti Turkish sentiment in the psyche of most Europeans that can be traced back to the siege of Vienna.

Once aroused in the context of anxieties about lack of immigration control, the prospect of mass migration from Turkey was the last straw that caused Britain to leave the EU.

Think about it. Britain the most politically mature country in the world voted to leave the EU – a decision of momentous historical importance – on a false prospectus.

Our real internal enemies are within the education system

How Gesy is penalising the private healthcare sector