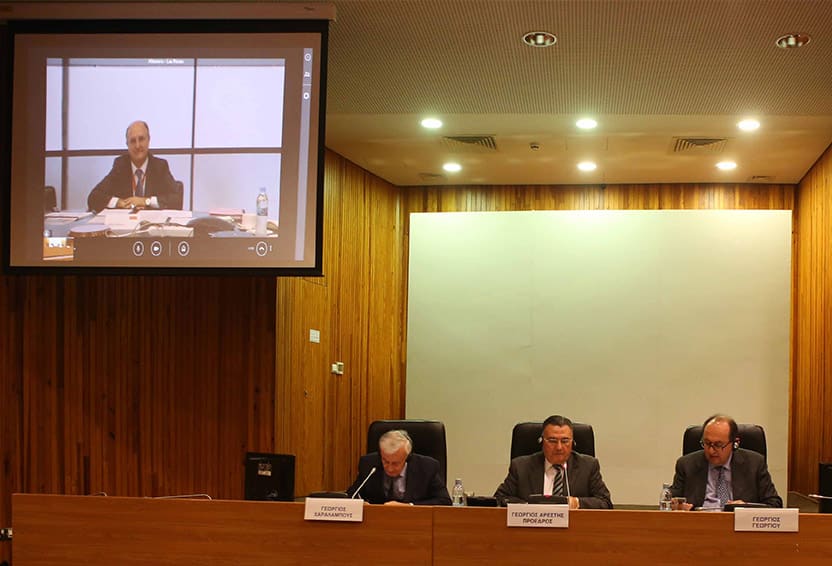 It would be inconceivable for any central banker to state in public that a lender faces liquidity problems, Central Bank of Cyprus (CBC) governor Chrystalla Georghadji told the committee of inquiry on Monday.

Testifying for the third time before the panel investigating the demise of the Co-op bank, Georghadji said it was apparent as far back as 2016 that the lender was in trouble.

Asked why, then, did she not sound the alarm, she replied:

“What primarily interests the Central Bank is financial stability. What would have happened the next day had the governor come out and said that this bank is at risk? The answer is simple: people queuing up to withdraw their cash.”

In all, Georghadji said, the state injected over €3.5bn into the Co-op after it was nationalised in 2013.

In April this year, to keep the Co-operative Central Bank (CCB) technically afloat, the government deposited into the lender €2.5bn raised from several bonds, and from its cash reserves. The €2.5bn will be added to the public debt.

According to Georghadji, deposit outflows from the Co-op began picking up pace in January 2018.

The situation continued to deteriorate, so that by the end of April the bank’s cash holdings were estimated to last for only another 35 days.

“In our view, the state correctly acted to prevent the bank from collapsing, by depositing €2.5bn, stabilising liquidity and allowing the process to sell the bank [to Hellenic] to go forward.”

The €2.5bn deposit, in addition to the €0.8bn allocated by the state to assist with the sale of the Co-op’s healthy operations, was approved by the European Commission.

Although the European Commission regarded the transaction as state aid – prohibited under EU law – it set out a number of conditions which, if met, would allow it to approve the deal.

Georghadji read out from a CBC memo outlining the European Central Bank’s (ECB) concerns over the viability of the Cypriot Co-op.

The ECB regarded the Co-op as a high-risk bank, she said.

Their primary concern was the high level of non-performing loans that persisted despite the bank’s takeover by the Cypriot state.

The Co-op was the only bank regulated by the ECB on which the ECB imposed provisions for additional capital due to its weak corporate governance.

She referred to discussions that were going on with the ECB on whether the latter would carry out on-the-spot audits at the Co-op.

“And although we do work with the ECB, first and foremost we are Cypriots, and so we tried to buy ourselves some time,” Georghadji said.

The central bank chief submitted to the panel two letters she had sent to President Nicos Anastasiades concerning the state of the Co-op. The letters are dated January 19 and February 7, 2018.

Since her testimony last week, she noted, she had received permission to hand the letters over as their contents had been “sanitised”, as she put it.

Georghadji also mentioned 11 letters which the central bank addressed to the finance minister, again relating to the situation at the Co-op.

But she declined to submit these to the panel for the time being, because she had yet to receive the green light from the ECB’s Single Supervisory Mechanism (SSM).

This riled the lead panelist, who remarked: “Unfortunately, the SSM is playing hide and seek.”

Also testifying on Monday was Julian Navarro, CEO of the Spanish firm Altamira.

In July 2017 the Co-op and Altamira, an asset management company, announced an agreement to set up a joint unit to which the lender would outsource the management of its delinquent portfolio. The agreement was implemented in January of this year.

The new unit was 51 per cent owned by the Spanish firm and 49 per cent by the Co-op. In addition to managing €7.2bn in non-performing loans, the new unit was also responsible for the management of real estate property in the possession of the Co-op, worth €0.4bn.

Navarro dismissed claims that the cooperation deal was slanted in favour of Altamira Cyprus.

He said the firm delivered, by reducing NPLs and increasing loan recoveries.

Asked whether work commissions were paid to Altamira Cyprus or the Spanish parent company, Navarro said the former.

The witness was asked under what circumstances Varnavas Kourounas, a former senior manager at the Co-op, was appointed managing director of Altamira Cyprus.

“We believed Mr Kourounas to be the most suitable person for the job. He was the only candidate, and there was no doubt that the situation was difficult,” Navarro said.