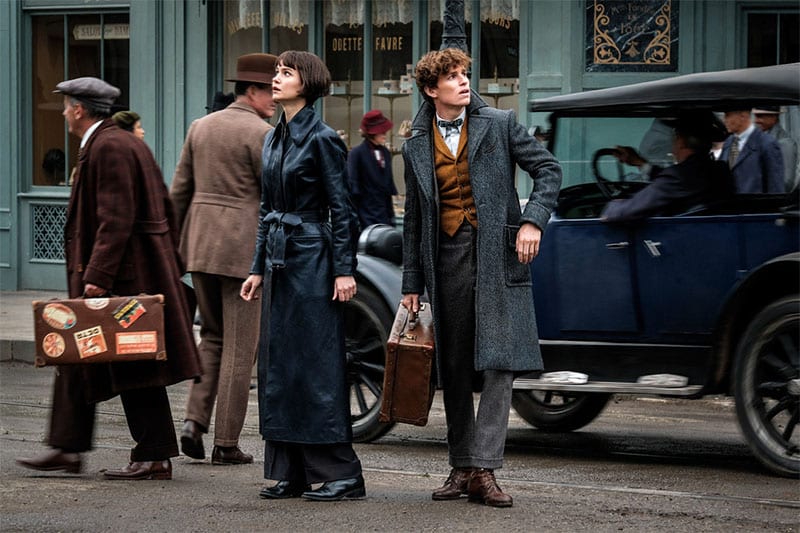 Grindelwald is played by Johnny Depp, with deathly-pale skin and bleached hair – though his crimes aren’t especially evident in this second instalment of J.K. Rowling’s Fantastic Beasts franchise. We open with him in jail, being transported to Europe so he can “answer for his crimes” – but it’s not what he’s done that’s the issue here, it’s who he is. Grindelwald, simply put, is a fascist with a message of wizard supremacy, his message being “very seductive” to some people – especially people like Queenie (Alison Sudol), a sweet young enchantress whom I described as “fey [and] good-natured” when the first film opened in 2016 but who now seems decidedly dim-witted, the better to make the political point. Grindelwald is Trump, d’you get it?

Now we’ve got that out the way, what’s left to say about this second movie (of a projected five)? As in the first one, the beasts are amusing, Rowling being keenly attuned to the box-office potential of quirky animals doing cute things (two years ago, I compared the first film to a cat video). Crimes of Grindelwald isn’t memorable but it’s moderately fun scene-by-scene, a baggy collection of incidents burnished by a $200 million budget – a strategy that worked fine for Rowling in Harry Potter, another bitty franchise that kept flitting from one thing to another in the service of an over-arching plotline. The macro-plot in this case concerns Credence, a young man slowly getting in touch with his powers and, like Anakin Skywalker, increasingly tempted to the Dark Side (I thought he might grow up to be Voldemort, but apparently not). Credence, however, barely appears in the actual movie – his story spread out across the whole saga – our hero, once again, being Newt Scamander (Eddie Redmayne), the shy zoologist who’s unflappably eccentric and as archetypally English as Dr. Who.

Also in the mix, for the first time, is future Hogwarts honcho Albus Dumbledore (Jude Law), the music going crazy with heartstring-tugging cues when he first appears. Hardcore fans know, of course, that both Fantastic Beasts and Harry Potter are part of the same universe, known as Wizarding World – the kind of aggressive branding that hardcore fans tend to love, and the rest of us tend to find distracting and a little spurious. It’s not like Dumbledore was such a complex character that knowledge of his youth is required to explain him (though it seems he once lost a sister, and blames himself for her passing; “Regret is my constant companion”). Rowling’s films, presumably unlike her books, aren’t really built for complex characters – mostly because they keep flitting from one thing to another, and waste so much time on amusing incidentals and cute beasties.

Newt’s stick-insect buddy is cute. The scaly gremlin creature named ‘Antonio’ is cute. The lion-monkey hybrid that’s terribly fierce – but easily distracted by a stick with a bell at the end of it – is cute. The platypus-like ‘nifflers’ are cute. Newt himself is quite cute, an absent-minded-scientist type who’s no good with women. (“She has eyes like a salamander,” he sighs, intending a compliment.) Dan Fogler as his sidekick Jacob, a pear-shaped Muggle with a hearty demeanour, is also cute – though the first film was all about his illicit, delightful romance with Queenie who’s now been turned into a dimwit supremacist, so it’s all a bit confusing. “There are no strange creatures, only blinkered people,” declares Newt, adding to the faux-political subtext that crops up now and then, between the other strands.

Crimes of Grindelwald operates in the way of most Marvel movies, or any film that’s part of a larger corporate plan. It’s too long, and not much happens. It has lovely throwaway moments, especially when it veers into comedy (Newt casts a quick spell on a cop that makes him giggle like a baby). It doesn’t resolve its plot, because it’s not supposed to be resolved till 2024 or thereabouts. At one point it suddenly provides lots of information, which (I assume) we’re going to need to negotiate the third instalment in 2020, if we’re still around by then; there are flashbacks and plot twists, revelations of who did what and when. I admit I didn’t really care, a sure sign of a movie that works in the moment but not as a whole.

Most of the above was also true of Harry Potter, admittedly – but I guess that was just a bit more charming, not to mention the thrill of watching its young stars grow up onscreen. Fantastic Beasts seems to lack any good reason to exist, though I suppose keeping J.K. Rowling busy counts as a reason, and giving her a platform to warn the world about fascism counts as a reason – and of course you can also marvel at the news that a phoenix will always come to any Dumbledore in need (it’s the law!), or wonder if that’s Dobby the elf in a cameo or just another elf of the Dobby persuasion. Meanwhile the ‘Harry Potter Wiki’ online – a fan-based resource that explains the crimes of Grindelwald, and more – runs to 15,725 articles and counting, handily eclipsing this $200 million trifle. What a world.