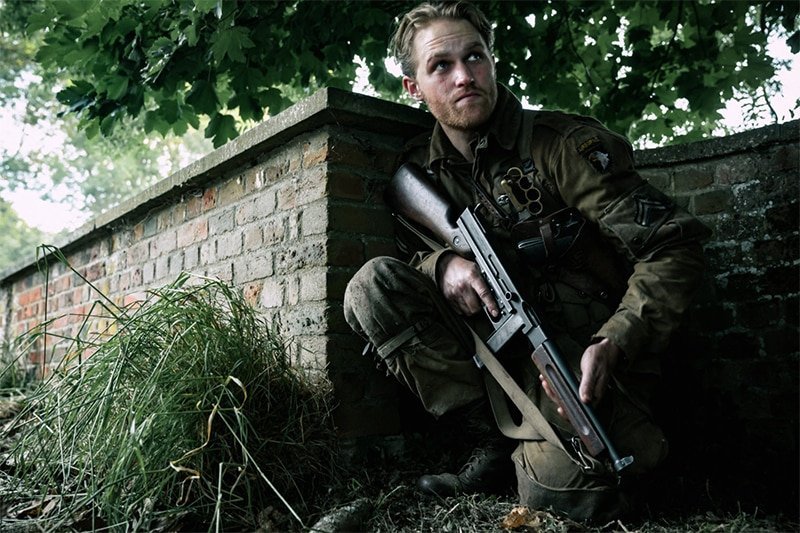 Did I make the right choice? Last week’s little detour to the Thessaloniki Film Festival left a bunch of films un-reviewed, actually a choice between three contenders. The Grinch is already a huge hit, even if it’s out a bit too early for the Christmas season (which is starting earlier and earlier), while The Girl in the Spider’s Web bills itself as ‘A New Dragon Tattoo Story’ with the air of invoking a much-beloved franchise – but in fact I went for Overlord, their disreputable horror-movie cousin, with a cast so un-starry it makes you wonder how the film even made it to Cyprus. Overall, I don’t regret it.

This is actually a blend of horror and war movie, cheekily jumping on the WW2 bandwagon alongside the likes of Dunkirk and Darkest Hour. Our heroes are a squad of American soldiers behind enemy lines, their mission being to take out a radio tower next to a small French town (they only have a few hours, the tower being crucial to the success of the following morning’s Normandy landings). The squad are the usual cross-section familiar from actual WW2 films like the 1946 A Walk in the Sun (there’s also some bonding with a young child, nodding to the likes of Sam Fuller’s 1951 The Steel Helmet): the callow rookie, the cynical smart-aleck with a Noo Yawk accent, the quiet guy who’s writing a book, the dynamic Sarge whipping the boys into shape. What they find isn’t so familiar, and quite extreme – then again, no horror’s too extreme when it comes to the boys from the Third Reich. To quote Indiana Jones: “Nazis… I hate these guys”.

There’s a larger truth there, viz. that war and horror are sides of the same coin (the two have been melded before, not too successfully, in B-movies like The Bunker (2001)). War is the temporary suspension of a survival mechanism – the prohibition from killing that keeps us civilised – in pursuit of a larger cause; horror is the temporary suspension of another survival mechanism, choosing to explore scary things instead of avoiding them, in pursuit of cathartic jolts (or just for a laugh). Not to mention that war often leads to atrocities, which are also the stuff of horror. “It’s a war, yes?” shrugs the evil Nazi officer in Overlord, justifying the weird experiments being carried out by a Mengele-like scientist on the edge of town. People die in unnatural ways, that’s the point.

Then again, there are limits. The film goes amusingly – or disgustingly – nuts in the second half, with such splattery delights as a woman’s head attached to a skeleton (“Stop, please!” she begs, still alive despite having no body), a manic homunculus creature with the look of a bloated foetus, and some gruesome fun with a meat hook. Some of the effects are prosthetic, adding to a general 90s vibe; the visuals are unusual, the hot yellow light, wide angles and packed, busy frames (e.g. in the opening scene on a bomber) quite unlike the sleek look of today’s Hollywood fantasies. There are memorable images – parachutists hanging from trees, silhouetted against a fiery-red background – and a sense that death may strike at any moment. “Friends die,” says Ford (Wyatt Russell) bluntly, Ford being the hardened veteran alongside Boyce (Jovan Adepo), the aforementioned callow rookie.

The first half is better, before the special-effects mavens take over. There’s an urgency to the squad’s adventures that suggests the film could’ve worked equally well as a turbo-charged action movie. (That opening scene is especially intense, the plane getting strafed and the sky full of fireballs as the men wait desperately for the green light to jump.) As in Fury, it’s made clear that our heroes have to be just as “rotten” as the Nazis – who, by the way, are so rotten that they spit on a little boy’s baseball before giving it back to him. Then comes the leap into horror, the Z-word – zombies! – being especially relevant; “The Thousand-Year Reich,” as the Nazi scum puts it, “needs thousand-year soldiers”.

Overall, the mixture works, though the film narrows its audience by heading so aggressively into splatter; a more realistic tale of rotten Nazis, with some horror-movie trimmings, might’ve been more successful. (The stories of senior citizens enjoying Inglourious Basterds, despite its ultra-violence, are accurate.) Still, Overlord is a pungent, hurtling, unpretentious B-movie, making no claims to righteous feminism as The Girl in the Spider’s Web presumably does – though the Nazi baddie’s crimes do include being a sexual predator and all-round creep vis-à-vis the movie’s French damsel – and certainly including no message about Christmas being a magical time, which I’m guessing you’ll find in The Grinch. I made the right choice.

Trump does not want to hear tape of ‘vicious’ Khashoggi murder