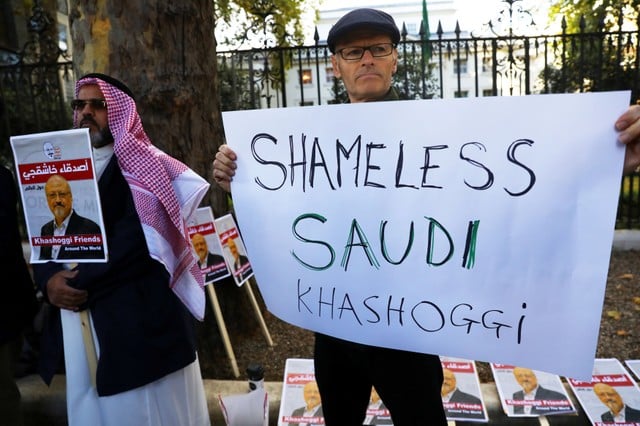 People protest against the killing of journalist Jamal Khashoggi in Turkey outside the Saudi Arabian Embassy in London, Britain, October 26 2018. REUTERS/Simon Dawson

“We are working very closely with Germany at this moment … and we will decide ourselves a certain number of sanctions very quickly over what we know (about the murder),” Le Drian told Europe 1 radio when asked whether Paris would follow Germany in imposing travel bans on Saudi individuals.

“But we believe that we need to go beyond that because the whole truth needs to be known.”

The kingdom is facing a global outcry over the murder of prominent Saudi journalist Jamal Khashoggi at the country’s Istanbul consulate in early October, which has strained its ties with the West.

Germany announced earlier on Monday that it had banned 18 Saudis suspected of involvement in the killing of journalist Jamal Khashoggi from much of Europe on Monday and moved to halt all arms sales to Saudi Arabia.

The bans bind all members of the European Union’s passport-free Schengen zone, suggesting Germany is willing to use its influence as the EU’s largest country to push for a tougher line.

Foreign Minister Heiko Maas said the decision had been closely coordinated with France, which is part of the Schengen zone, and Britain, which is not, and EU states had expressed “great support” for the decision when he briefed them in Brussels on Monday.

“We also had a joint statement on the issue this weekend, which indicates we are not satisfied with the results of the investigation thus far … and that we retain the right to take further steps,” he said.

Germany had also pressured its arms manufacturers to stop authorised shipments, something a spokesman said meant: “there are currently no (arms) exports from Germany to Saudi Arabia,”

Any member of the 26-country Schengen area can unilaterally ban anyone it deems a security risk, although it unusual for a country to impose such a large number of bans at once in such a politically sensitive case.

Those banned are the 15 members of the squad suspected of killing Khashoggi in Riyadh’s Istanbul consulate, and a further three suspected of organising the murder, had been banned, Foreign Ministry spokesman Christofer Burger said, without naming them.

Asked if Crown Prince Mohammed bin Salman was among them, Burger declined to comment.

Saudi prosecutors said last week that the crown prince, Saudi Arabia’s de facto ruler, knew nothing of the operation, in which Khashoggi’s body was dismembered, removed from the building and handed over to an unidentified “local cooperator”.

An Interior Ministry spokeswoman said the ban would apply even if any of those affected held diplomatic passports.

Defence industry experts said the main impact of Germany halting exports would be on the sale of patrol boats built by privately-held Luerrsen, jeopardising 300 jobs at a shipyard in the northeastern state of Mecklenburg-Vorpommern, and four Cobra counter-battery radar systems to be built by a consortium that includes France’s Thales, Airbus and Lockheed Martin of the United States.

It remained unclear how the freeze would impact multinational programmes such as the Eurofighter, built by a consortium of firms in Britain, Germany, Italy and Spain.

However, in response to a parliamentary query, the government said previous accords meant no Eurofighter partner nation could block a sale of jets or parts to other countries.

The company is still finalising the deal after signing a memorandum of understanding with Saudi Arabia in March. About a third of their components would come from Germany.

President does not rule out Nato role in Cyprus solution