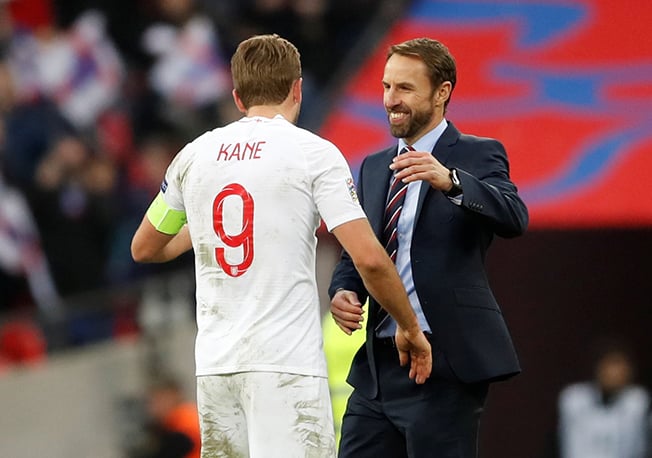 England secured next summer's shot at silverware by coming from behind to exact revenge against semi-final foes Croatia on Sunday, when Jesse Lingard and Harry Kane netted in a late 2-1 win that had Wembley rocking

Gareth Southgate wants England to keep pushing, improving and making the nation proud as they look to continue their eye-catching ascent in 2019.

Even the most optimistic fan would have struggled to have predicted this year’s successes, having made the final four at the World Cup in Russia before reaching the inaugural Nations League Finals.

England secured next summer’s shot at silverware by coming from behind to exact revenge against semi-final foes Croatia on Sunday, when Jesse Lingard and Harry Kane netted in a late 2-1 win that had Wembley rocking.

It complemented last month’s thrilling 3-2 victory in Spain and provided the perfect ending to a year that even surpassed Southgate’s expectations.

“I think that they should be very proud of what they’ve done,” the England manager said of his post-match message to his squad.

“The quality of their play, the resilience they’re showing, the way they’re coming together as a group, the strength of them as a group. That’s been really pleasing.

“We almost take for granted now some of the football they’re playing out from the back in the first half, which was really of the highest quality under pressure.

“So, there are steps they are taking which are kind of accepted now and the next stages were to win in these big matches and over the last two months we’ve really been able to do that.

“What we can’t do is, again, it’s the same challenge we had after that summer – we’ve had now more consistency, but we have got to keep pushing and improving, and not sit back. We’ve beaten three of the top 10 in the last couple of months, but there are still more targets ahead.

“Important qualifiers in March, we can’t take those for granted and a really exciting challenge for next summer now.”

The challenges that lie await in Euro 2020 qualification and next summer’s Nations League Finals in Portugal will become clear in early December.

But the fact they have gone from 16th to fifth in the world rankings this year will give them confidence, while topping Group A4 ahead of swashbuckling Spain and World Cup finalist Croatia is another “significant step”.

Southgate believes England had the hardest group in the inaugural edition of the Nations League, with such challenges helping his callow group become consistent performers.

“You can only have that consistency if you work at things, if people are really clear on how we want to play, if we have the humility to get back to work immediately after the game on Thursday night (against the USA),” the Three Lions boss said.

“And we know where we sit – we’re not perfect, but we are improving. We have got a real desire and hunger amongst the whole group to keep improving.

“Slowly we are starting to beat those top teams now. We’ve had an unprecedented run of fixtures, which has been tough but, actually, we’ve learned so much from it. Because you have to be near on perfect in those game against the best team and it doesn’t allow you to be sloppy in any way. I think all of those factors are helping us to progress.”

There has been an injection of fresh faces since the summer, with Ben Chilwell, Ross Barkley, Joe Gomez and Jadon Sancho featuring against Croatia having not even made the World Cup squad.

“We knew that to keep the hunger, to keep the challenge, there’s things we can talk about,” Southgate added.

“But you need competition for places and we knew the level of some of the young players coming through and some we’d looked at. We had a close look at Ben ahead of the summer and didn’t feel he was quite ready, but he started the season really well with Leicester.

“And the younger ones have kind of emerged so quickly. Sancho has become an option so quickly ahead of where we would have thought in the summer. But we know the quality of players, Gomez was another that would have probably come with us in the summer if he had been fit, so we’re not afraid to put them in.”

‘New era’ for mountain communities as first-ever commissioner sworn in