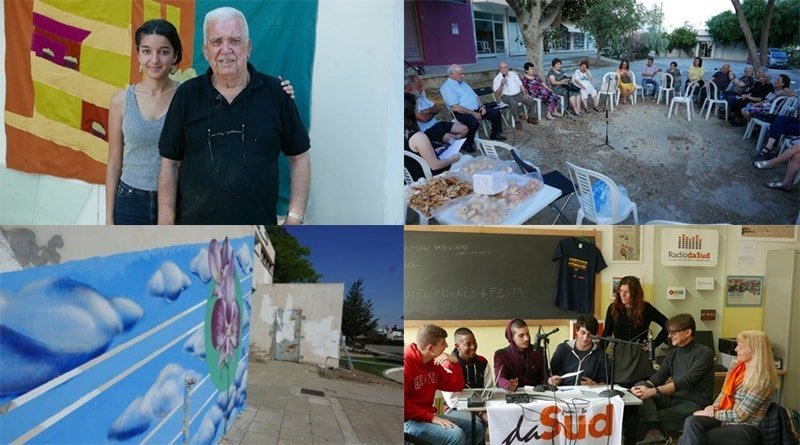 Artists around Europe have spent almost a year focusing on how free people living in European cities actually are, a project that is culminating in Cyprus this coming weekend with a video that has been staged in a refugee camp.

A total of 42 Goethe-Instituts have been grappling with the concept of freedom at a time when populist and nationalist parties are increasingly gaining ground, an initiative which aspired to allow dialogue and forge new networks between the instituts/cities involved.

“Europe is changing. EU-scepticism, while most glaringly epitomised by the Brexit referendum, is not limited to Great Britain. Europe faces challenges at many levels and is looking for answers,” a press release said.

“The aim of the Freiraum (Free Space) project is to assess the state of freedom in Europe’s cities. What are the issues that come up when residents, sociologists and creative artists think about the concept of ‘freedom’ in very local terms? What problems are observable in a city?” it added.

“The biggest challenge of our society today is the doubt of values and most importantly the inability to act towards those values, especially in relation to justice and solidarity. We’re not aware about what is happening right next to us anymore, but we know and discuss irrelevant things about things that happen on the other side of our planet. Our societies are getting old and the young ones have lost hope and are bouncing between survival and economic sustainability, so that they can consume “goods” like the rest of the western societies. This makes the young vulnerable to easy money and ephemeral choices,” said Achilleas Kentonis of the Artos Arts Foundation.

At the same time, Rome worked on a question that focused on the city’s struggle with organised crime. In Rome, not only does the Mafia control the local economy, but in many places it even takes on some of the welfare responsibilities of the State. This is how the Goethe-Institut in Rome partnered with the anti-mafia association daSud and made use of experiences in some outlying areas to promote sustainable urban development. In particular, their question was: How can grassroots democratic methods of urban development impact neighbourhoods plagued by the Mafia and organised crime?

In both cases, focus was placed on supporting a socially protected and worthwhile future for young people with both partners working to bring young and old closer together, to learn new skills and share experiences through performances, exhibitions, workshops, concerts and public space installations.

“We fuel societies with angrier, more insecure and marginalised youth and give them temporal solutions because we do not have the time to plan and get them engaged. The Freiraum project gave us the “time” to think and get engaged,” Kentonis said.

Using the Strovolos III refugee camp in Nicosia as a central location to work on, Saturday’s presentation will reveal the work that has been done over the past months including a graffiti series, a 360 degree video and an app.

“Walls (hence the use of graffiti), both in Nicosia and in Rome and in many other parts of Europe, represent a limit to freedom, walls are symbols of divisions and violations of rights, but are also spaces of expression and communication and we can transform them into resources. The augmented reality technology and a 360 degree video has been employed to blend the virtual and the real world and to provide information to young people in a new and attractive way while the app was created to make the artistic project actions accessible to everyone,” the Goethe Institut said.

“Our work at the Strovolos III refugee camp was a collective work because we always open up challenges for synergies and sharing of vision… We were looking for a place in any refugee camp because they represent a micro-society, with a surprising isolated plurality, and less privileged youngsters. Eventually, after hard work and the collaboration of the municipality of the Strovolos we moved in and started interacting with the local population via our researchers and university students. The local population consists off old people, including its first residents from 44 years ago, immigrants that arrived in Cyprus during the last decade and less privileged people form Cyprus and other EU countries that could not afford the rent elsewhere,” explained Kentonis.

“For the last past months, we have been working in silence and in a low profile manner to try and get more ‘players’ involved in the project and secure its sustainability,” he added.

While freedom is usually taken for granted, the Freiraum project challenged those taking part to look at it in a new light. “It gave the opportunity to each city to redefine this issue in a bottom up approach. This, for me, was good and it was over-intellectualised, so it could have been lost within words and fancy organisations, but I’m grateful that it all happened. We were ready, we had the right teams and the right resources and Freiraum came in to add to and upgrade our efforts, after all, the doubt of values and the inability to act towards those values especially in relation to justice and solidarity, is a concern of all of us,” concluded Kentonis.

Presentation on November 24 will include a guided tour at the Strovolos III Refugee Estate, Nicosia. The event starts at the Goethe-Institut Nicosia at 10am. For more information visit www.goethe.de/prj/fre/en/index.html?wt_sc=freiraum