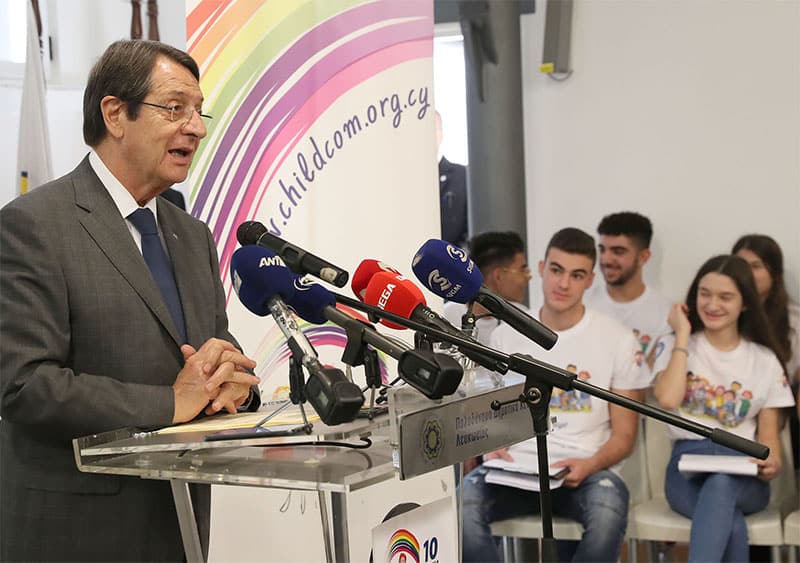 The government is consistently working on building a society focused on children and granting them tools to shape future society, President Nicos Anastasiades said on Tuesday at an event to mark International Children’s Rights Day.

Anastasiades attended the event at the offices of the Children’s Rights Commissioner Leda Koursoumba and said the government was working to make sure that children “have the tools to help them not only be passive bystanders, but active shapers of the future society.”

On her part, Koursoumba said that following ten years of the Commissioner’s office operation Cyprus has achieved a lot but there is room for further improvement.

“Taking into account the Commissioner’s observations and by adopting targeted policies, the government has produced a multifaceted work on issues that concern children both directly or indirectly,” Anastasiades added.

The president said that after ratifying the Lanzarote convention in 2015 and the modernisation of national legislation, a national strategy for child protection from sexual abuse and child pornography has been drafted, while in March 2018 the government appointed the board for national strategy implementation, which consisted of state officials and non-state stakeholders.

“The strategy’s primary aim is to safeguard that every child must have the opportunity to grow in conditions of security with all necessary tools so that they could develop healthy relationships, without facing any form of sexual abuse,” he said.

Anastasiades said that in November first the cabinet also agreed to institutionalise a day for public dialogue with children.

“The goal is to give children the ability to express their opinions and recommendations on certain topics that deal with them,” the president said.

The goal is to build a society that is based in peace, justice, equality, and respect of people’s differences, the president added.