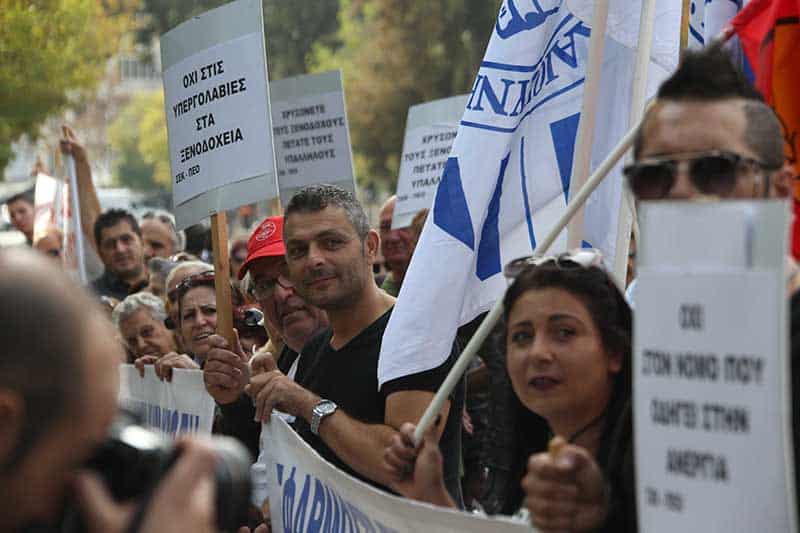 Hundreds of hotel workers went on the march on Tuesday in Nicosia to protest a bill before the House that, according to unions, abolishes all provisions of existing employment legislation in the sector and will lead to massive layoffs.

Unions say the new bill, to which they had no input, would abolish the obligation of employers to hire a minimum number of people in all hotel specialities, and would give hoteliers the opportunity to outsource more services.

The bill, the unions said, repeals all the provisions of existing legislation that obliges hotels to employ a sufficient number of employees in all specialities and regulates their employment terms. It also introduces a new provision which allows the rental or sublease of restaurants and bars of hotels to third parties.

The leaders of the SEK and PEO trade unions, who took part in the protest march from the finance ministry to the House, said the bill effectively deregulates the labour market in the sector and jeopardises upcoming discussions on the new collective agreement for the industry.

The two unions did not rule out more dynamic measures if the bill was not withdrawn.

Protesters gathered at around 11am at the finance ministry holding banners demanding their current collective agreement be honoured, ‘no to outsourcing laws for hotels’ and ‘golden hoteliers throw workers out on the streets’.

Hoteliers have seen record levels of visitors over the past three years due to the tourism boom.
According to PEO chief Pambis Kyritsis, current collective agreement are not being respected by hoteliers “and there are no industrial relations in a rapidly-growing sector of the economy”.

“Then the government comes with a bill, which provides for further deregulation,” Kyritsis said, adding that the bill would entitle hoteliers to sublet sections of their premises. This would mean they did not have to comply with the regulations currently in force, in term of staff rights, or the hoteliers’ obligation to be accountable for what is happening in their hotels. “This will result in increased unregulated work, and will result in even greater problems for hotel guests,” he said.

SEK’s general-secretary Andreas Matsas warned: “If policies are promoted that contribute to further deregulation of the labour market and call into question the importance and role of workers, this will affect the collective bargaining process and contribute to the breakdown of industrial peace.”

Matsas said that already in the sector, the undeclared work rate is over 20 per cent, and wages were below the hourly average in Cyprus.

One woman at the protest told CNA she had been working in a hotel for 16 years and was earning only €800 a month. “Can they [hoteliers] live on €800? Let them try it for at least a month.”

According to the resolution delivered by unions to the government during Tuesday’s protest, the proposed changes under the new bill are superseded by the current law, which provides that every hotel according to its category is obliged to employ a sufficient number of staff, suitably trained in all specialties to offer quality services. It also includes provisions on the employment of staff.

The unions are calling for a dialogue. If this is not forthcoming, they warned that they would react more forcefully. They asked the labour ministry to intervene during their visit to the various government departments on Tuesday.

Our View: Wrong that refugees are given increasing rent help when people are homeless