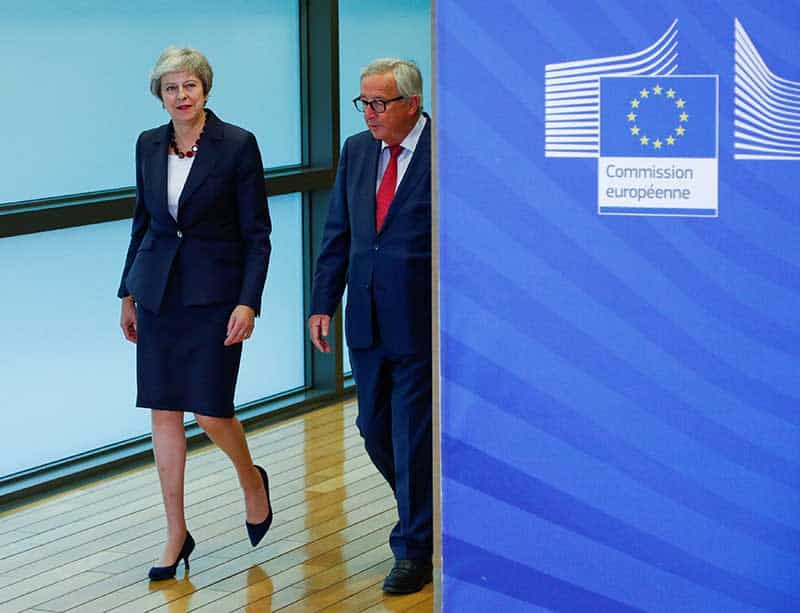 British Prime Minister Theresa May arrives in Brussels on Wednesday to attempt to agree a blueprint of Britain’s post-Brexit ties with the European Union, which the bloc’s diplomats said was being held up by disagreements over Gibraltar, fisheries and trade.

All EU leaders are due to meet on Sunday to rubber-stamp the Brexit deal, consisting of Britain’s withdrawal agreement and an outline of the two sides’ new relationship after Britain exits the EU.

The fate of the withdrawal accord is uncertain. British lawmakers are stepping up a fight over the terms of departure, with some trying to open the way for the country to change course.

While the EU is trying to discourage Britain from any renegotiation of the nearly 600 pages of dense legal text that forms the divorce deal, some of the remaining 27 member states also have issues with it.

Attempting to address those issues in ongoing talks on the document that will outline future ties, national EU envoys of the 27 states met on Brussels in Tuesday.

“Still some work is needed on three aspects: fish, goods and Gibraltar,” one diplomat said of the meeting, held on the eve of May’s talks with Jean-Claude Juncker, the head of the EU’s executive. “Juncker and May will try to sort it out tomorrow.”

Spanish Prime Minister Pedro Sanchez on Tuesday threatened to vote against the overall Brexit accord on Sunday unless it makes clear that the future of the disputed British territory of Gibraltar would be settled through direct talks between Madrid and London.

“Spain does have a very real problem on Gibraltar,” said another diplomat.

Many in the EU’s political hub Brussels said they thought Sanchez was trying to score points with voters at home before a looming domestic election.

They believed the issue could be solved by the leaders and warned Madrid not to push so far as to put the whole Brexit agreement at risk.

“We are following the latest developments with growing concern,” said a third EU diplomat after Madrid said it would want changes to the already-negotiated divorce deal.

“No one wants to reopen the withdrawal agreement. That would lead to the crumbling away of the whole Brexit agreement and lead us all into no-man’s land.”

Within the EU, a withdrawal treaty is adopted by qualified majority and not unanimity, so formally a single state like Spain cannot block it. However, EU leaders are seeking unanimity on the deal.

With the fate of the tentative Brexit agreement still far from clear, both sides have also been advancing their contingency plans for the most damaging scenario under which Britain would crash out of the EU with no deal in place.

Another diplomat who took part in Tuesday’s meeting said Britain was seeking an easy flow of goods post-Brexit that was too close to that enjoyed by bloc members only.

“The UK wants free movement of goods, which they won’t get because that’s back to discussing partial access to the single market, which we don’t do,” the person said.

In addition, France has called for more guarantees on future access to Britain’s rich fishing waters, which London wants to keep firmly under control after Brexit.

EU members with pending issues to be resolved are seeking to either address them through the blueprint that is now being negotiated, or via separate EU statements that would not formally be part of the deal with Britain. France has backed such extra declarations, while Germany opposed them, saying the focus should be on finalising the outline of the future EU-UK relations.

Following May’s meeting with Juncker, EU envoys will meet to discuss the approximately 20-page blueprint on Thursday, and then the leaders’ negotiators will look at it again at a meeting scheduled on Friday, two days before the summit.