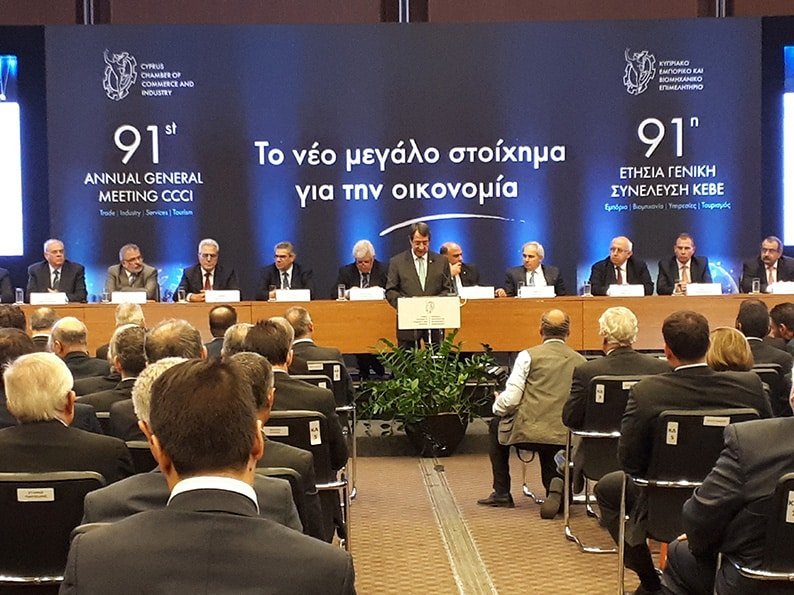 The 91st annual general meeting of the Chamber of Commerce

Cyprus needs a new economic model which utilises both the traditional sectors and strengthens the role of young people if it wants to get ahead, the head of the chamber of commerce and industry (Keve) Christodoulos Angastiniotis said on Wednesday.

During his speech at the 91st annual general meeting of Keve that was also attended by President Nicos Anastasiades and several ministers, Angastiniotis referred to the rapid changes taking place due to the technological revolution.

“As a small country we have no choice. We must at all costs hop on the train of technological development and of the digital world and move on to the necessary modernisation and reform of the economy,” he said.

He added that nothing should stop the country from moving on to a new, more flexible and more dynamic economic model.

Keve, he said, believes that there must be planning for a new economic model that will make use of traditional sectors and strengthen young people “so that with the necessary reforms and technological upgrading our country has a future”.

“We place particular emphasis on digital transformation that is necessary for both the state and businesses as well as for society.”

Competitiveness is another area of concern he said.  “It is for this very reason that we strongly support the creation of a deputy ministry for research, innovation, digital transformation, investments and competitiveness.”
Keve has already carried out a study and has organised a conference on the issue. “All this useful work is already in the hands of the state awaiting the political decision for its implementation,” he said.

In his speech, Angastiniotis was also critical as to the way the government has handled the voluntary exist scheme for employees of the now defunct Central Co-operative Bank but also of civil servants, the state teacher unions and those wishing to exploit the National Health Scheme (Gesy).

“We believe that the arrangement made for the compensation of employees who left the co-op, as well as the reimbursement of cuts to civil servants, is beyond the capabilities of the economy,” he said.

The state, he said, “has wrongly” rewarded those who opted for the voluntary exit scheme of the co-op bank “with such high compensation, also increasing public debt”.

He warned that if public finances are not protected, and unless the public debt is “tamed”, “we are at risk of returning to dangerous paths.”

He also said that Keve’s position is that “the bills on public sector reform introducing a system of evaluation and setting maximum rates of widening the state wage bill as a percentage of GDP as a permanent settlement should be voted on immediately.”

Angastiniotis also expressed Keve’s concern for the challenges presented over implementing Gesy and the need for the autonomy of public hospitals. We need “the faithful adherence to the Gesy budget and the explicit commitment of all that there will be no new demands and trade union blackmails for new posts and salary upgrades.”

If some people consider the Gesy as a vehicle to gain more power or higher wages, he said, “they shall find Keve against them.”

Anastasiades too, said that the government has already prepared a bill for the establishment of a deputy ministry of digital strategy, research and innovation, which is to be tabled to the cabinet for approval by the end of the year.