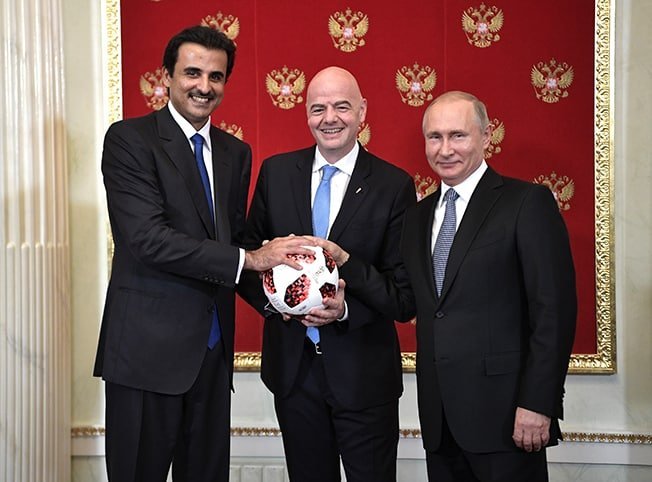 Wednesday marks exactly four years to the kickoff of the next World Cup in Qatar, which could yet be an instrument to help end regional tensions and the first 48-team tournament if FIFA president Gianni Infantino gets his way.

The head of world football’s governing body has been pressing in recent weeks for the 2022 finals to expand from the 32 teams in Russia this year to 48, even though it was previously planned that the expansion of the World Cup would happen when Canada, Mexico and the United States jointly host the 2026 finals.

Qatar have not yet responded to the idea but previously have sounded cautious about the country’s capacity to go beyond a 32-team tournament.

Organisers are building only eight stadiums for the one-month tournament, which has been controversially pushed back to late in the year because of the fierce summer heat. It kicks off on Nov. 21, 2022 with the final on Dec. 18.

Any expansion would mean Qatar possibly sharing some matches with their neighbours but the country is the subject of an economic blockade imposed by four of them.

The boycott disrupted Qatar’s shipping routes through the Gulf and blocked imports across its only land border, with Saudi Arabia, previously the route for its perishable food supplies and construction materials.

It has meant Qatar has had to dig into its deep pockets to find alternative trading partners and keep its World Cup preparations on track.

“To think there are people in the region who might not enjoy the first World Cup in the Middle East is very disappointing,” said Hassan Al Thawadi, who heads the local organising committee. “We look forward to this matter being sorted out. Football is for the people and we want this tournament to reach the people of the region.”

“Personally, as president of FIFA, I would be very happy if some matches could be shared with some countries in the region,” said Infantino, adding that football had the power to break the impasse if all else failed. “Football unites, builds bridges; that could be a concrete result.”

Qatar is the smallest country to host the finals, with the distance between the two furthest venues a mere 72 kilometres.

The country is a hub of building activity with Qatar promising to deliver the completed venues some 24 months before the tournament begins.

One is already completed: the Khalifa International Stadium in the capital Doha reopened in May last year after renovations, including the installation of a cooling system that can take the temperature in the venue down to the mid-teens.

Qatar is spending a staggering $200 billion on hosting the tournament, although Al Thawadi said only between eight and 10 billion was being spent on the stadiums.

The rest is going on wider infrastructure projects, including a rail link, already partially completed, that will connect all the venues.

The Al Bayt Stadium in Al Khor will be the most northerly venue, seating some 60,000 in a stadium covered by a giant tent structure, but the rest are in and round Doha, making for a World Cup that will have little in common with those that have come before it.