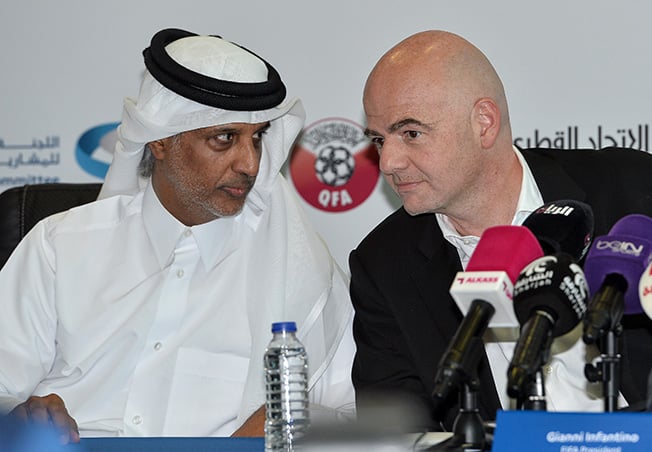 FIFA president Gianni Infantino expects the 2022 World Cup in Qatar to be the best ever, he said in an interview.

“It will be a very exciting World Cup…just amazing and fantastic,” Infantino told beIN Sports.

“We are FIFA and we want only the best, this means that every World Cup has to be the best-ever, as was the case for Russia, and all the ingredients are there to make the World Cup in 2022 an unforgettable event.”

The small gulf kingdom, which stretches only 180km from one end to the other, is unlike any previous host with little sporting tradition and a population of just over 2.5 million.

“It will be very compact, all stadiums are one hour maximum from each other, hosted by a country that has all the infrastructure ready to welcome the world,” said Infantino.

The tournament begins in exactly four years’ time, on Nov. 21 2022, having been moved from the traditional June and July slot to avoid the searing summer temperatures.

“The climate will be great as well… it’s between 15 and 25 Celsius in Doha and these are ideal conditions for such an event,” said Infantino.

The furious pace of construction has led to allegations of exploitation of migrant workers building the new infrastructure with human rights organisations condemning labour practices in the country.

Infantino, However, emphasised, as he has done several times in the past, that the problem would not have come to light without the World Cup.

“This World Cup will leave a great legacy,” he said “On the social side, it has had a very important social impact in the whole region.”

Infantino, who was not asked about proposals to increase the tournament from 32 to 48 teams, added that some stadiums would be taken down and shipped off to other countries after the event.

“This is really a sustainable World Cup with beautiful stadiums, beautiful venues and this is the first time that 170,000 seats will be dismantled and shipped to countries which need them, in Africa and Asia,” he said.

“It will show the Arab world in a positive way and the world will be surprised.”

Qatar’s national team has never played at the World Cup and is currently ranked 96th but Infantino said there had been signs of improvement.

“The latest results have been encouraging for Qatar… they have beaten Ecuador and Switzerland and they drew against Iceland. I think they are on the right path to having a competitive team.”