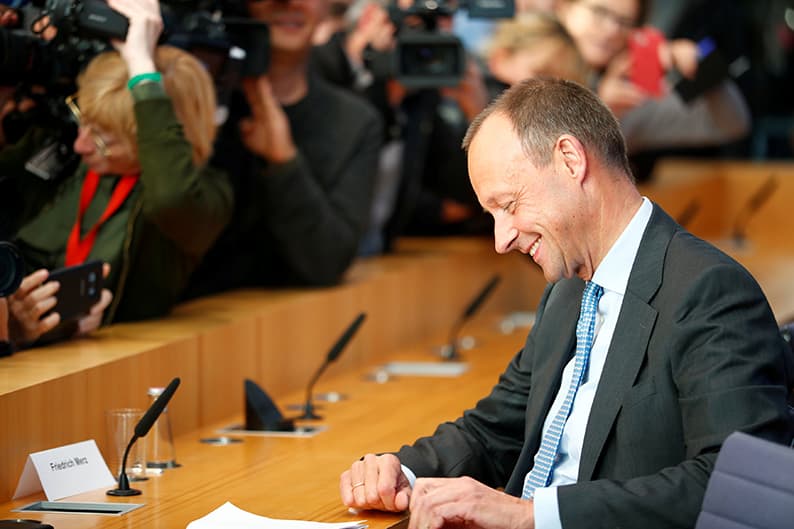 A conservative running to succeed Chancellor Angela Merkel as head of their party has raised an outcry by questioning Germany’s constitutional guarantee of asylum that was enshrined to atone for World War Two Nazi crimes.

Germany’s “Grundgesetz” (Basic Law) assures asylum to all “politically persecuted” – a simpler pledge in the past when it covered a handful of Soviet dissidents during the Cold War than now when millions seek sanctuary in Europe from war and poverty.

This might have to change, would-be Merkel successor Friedrich Merz said on Wednesday evening on the campaign trail in Thuringia, an eastern state where hostility to immigrants helped propel  Alternative for Germany (AfD) to second place in the 2017 national election.

“We must be prepared to discuss the constitutional right to asylum if we seriously want a European immigration and refugee policy,” he said to applause from local party delegates.

Merz said that Germany’s constitutional guarantee was “unique” in the European Union, meaning Berlin could be obliged to take in refugees rejected under a common European asylum policy. The bloc is divided over how it should cope with an influx of migrants.

Constitutional provisions granting asylum are indeed rare. But all other EU countries have equivalently strong legal commitments to guaranteeing asylum to the persecuted, including via international conventions that have constitutional force.

His remarks were also an implicit rebuke to Merkel, whose decision in 2015 to admit over a million refugees scrambled European politics and helped generate a far-right surge across the continent.

The winner will be in pole position to lead the EU’s largest country and economic powerhouse.

Kramp-Karrenbauer rejected Merz’s proposal, saying it risked undermining a principle that was central to the CDU.

“Abolishing the basic right of asylum or introducing limits so that it will, in effect, not exist in the way our mothers and fathers thought of it, is for me incompatible with what the CDU stands for and with the legacy of (former chancellor) Helmut Kohl,” she told a Bild livestream event.

Kohl, who died last year, championed the idea that Germany, responsible for some of history’s greatest crimes, including the Holocaust of Europe’s Jews, had a special duty to foster peace by forging an integrated, democratic Europe.

Merz also appeared to align himself against Merkel with East European opponents of a UN migration pact during the hustings in the small Thuringian town of Seebach.

His remarks drew fire as well from Health Minister Jens Spahn, the third-placed candidate in the succession race and another critic of her liberal refugee policies.

“The constitutional right to asylum for political refugees is a great virtue of our constitution, created against the background of two world wars, great suffering and vast displacements,” Spahn wrote on Twitter.

He himself drew applause from delegates in Seebach with an attack on “excessive political correctness”, which left East Germans who had grown up with censorship under Communism “not knowing what they are allowed to say.”

The CDU will pick a successor to Merkel, chancellor since 2005 but stepping down from the party helm after a string of regional election setbacks, at a congress in December.

“If he meant to question the right to asylum, then I think very little of it. We have the right to asylum in our constitution in Germany for a good reason, and that has to do with our history,” he said in a radio interview on Thursday.

Social Democratic Finance Minister Olaf Scholz was caustic, telling the Passauer Neue Presse newspaper it was annoying to see the “CDU’s internal popularity contest being carried out on the backs of the very weakest” – an allusion to asylum seekers.

Water cuts due to maintenance work