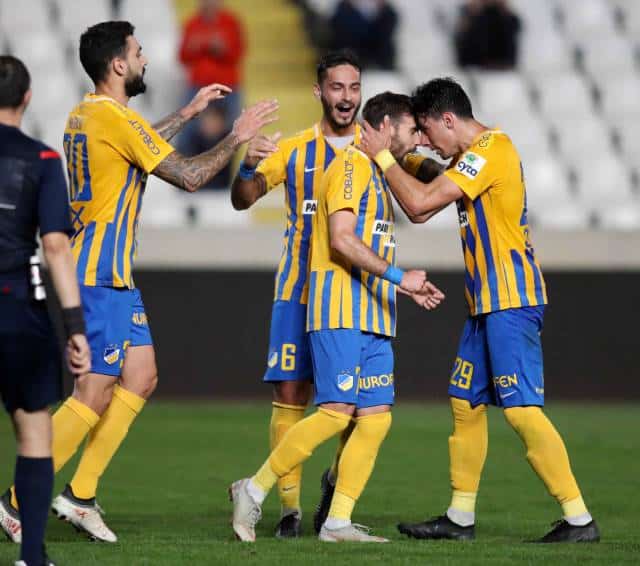 Champions Apoel, who are second in the table, travel to Larnaca to play fourth-placed AEK in the big match of the weekend

The Cyprus football championship resumes this weekend with the clash at the Arena stadium in Larnaca taking centre stage as fourth-placed AEK take on second-placed Apoel.

Another very important game, though for totally different reasons, will take place in Nicosia between Omonia and Anorthosis while leaders AEL face a tricky match away to fifth-placed Nea Salamina in Larnaca.

Apollon are expected to take advantage of the games between the championship contenders and they should have an easy afternoon in Limassol against bottom club Alki Oroklinis.

Two teams struggling at the wrong end of the table, Pafos FC take on Enosis Neon Paralimniou while the last game of round 10 will take place on Monday between Ermis Aradippou and Doxa Katokopias.

AEK have a pretty good record against Apoel in recent years and given the current form of both teams it should be a closely-contested and low-scoring game.

AEK coach Antony Iraola has no injury concerns and will be able to put out his strongest possible team. His front two of Florian Taulemmeuse and Ivan Triscovski are a handful for any defence while at the back Catala and Truyols form an almost impregnable wall.

“We are playing against one of the strongest teams in Cyprus,” said AEK’s Spanish midfielder Jorge Larena and urged their fans to do their part in achiving their goal which is none other than the three points.

Apoel’s Paolo Tramezzani has managed to shore up his team’s leaky defence as they kept three clean sheets in the four games he has been in charge of so far.

However he has yet to resolve the problem of his misfiring strikers as Apoel failed to score in two of the four games.

Apoel have been heavily dependent on Jordanian international Moussa al Tamari, who has dazzled with his performances so far. He has been carrying a knock though and missed the last three games for club and country and may not start if he is not 100 per cent fit.

Two teams that started the season full of hope, with a European finish the minimum of their targets, Anorthosis and Omonia, are currently in sixth and seventh on 12 points, a massive 10 points off the top.

A draw is no good to either side so expect both teams to go all out for the three points.

Two teams that have exceeded expectations so far, are Nea Salamina and leaders AEL. Both teams come into this game on the back of a defeat and will be looking to return to winning ways at all costs.

Apollon’s Sofronis Avgousti is expected to make six changes to the team that defeated AEL a couple of weeks ago but this should not stop them from securing the three points.

A musical encounter in Paphos