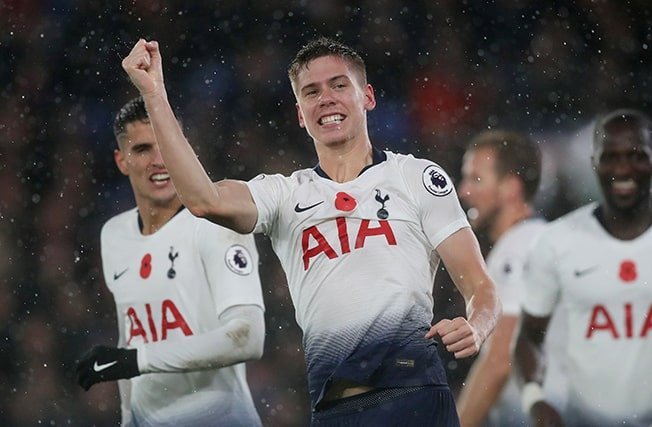 It has been quite a month for Tottenham Hotspur’s 20-year-old Argentine defender Juan Foyth.

So assured was he in a 3-1 League Cup victory at West Ham United, his first appearance of the season, that he was rewarded with a first Premier League start a few days later and conceded two penalties in a 3-2 win at Wolverhampton Wanderers.

Retained for the game against Crystal Palace, he was outstanding on a wet night in south-east London, scoring a headed winner. He then flew off to make his Argentina debut against Mexico and was named man of the match in the first of two consecutive games between the sides.

With Jan Vertonghen still injured and question marks over Davinson Sanchez’s hamstring ahead of Saturday’s home clash with Chelsea, Spurs boss Mauricio Pochettino would have no qualms about thrusting Foyth into the derby.

The only sticking point could be his late arrival back from Argentina, along with team mates Erik Lamela and reserve keeper Paulo Gazzaniga, but whether or not he plays, Foyth’s breakthrough says much about the club’s philosophy.

Much was made of Tottenham’s failure to sign a single player in the last transfer window, yet they are fourth in the table despite playing eight of their opening 12 games away.

If they inflict a first league defeat on Chelsea this season they would move above Maurizio Sarri’s side into third spot.

Once again, Argentine Pochettino, deprived of the huge transfer kitty available to the other clubs battling for the top four, is proving adept at unearthing gems.

Lamela has blossomed into an outstanding attacking midfielder and Gazzaniga has looked impressive when called upon to understudy France international Hugo Lloris.

Pochettino has built his career on trusting young players and Foyth’s emergence is the latest example of why the former Espanyol and Southampton manager is so valued at Spurs, who are juggling the costs of a yet-to-be-completed 800 million pounds ($1.02 billion) stadium and staying competitive on the pitch.

Argentina coach Lionel Scaloni praised Foyth after the 2-0 friendly win over Mexico on Friday and acknowledged the part Pochettino had played in the defender’s development in London.

If selected, Foyth will face a stern test against a Chelsea side who have made a mockery of a so-called two-horse title race between champions Manchester City and Liverpool.

The only other Chelsea team to start a Premier League season 12 games unbeaten were Jose Mourinho’s 2014-15 title winners.

Despite that, and the sizzling form of Eden Hazard, Chelsea are still challenging just under the radar, although a win at Tottenham’s temporary Wembley home might even convince the understated Sarri that his side can make a run for the title.

Manchester City, leaders by two points from Liverpool, have not conceded an away league goal since August and will expect to come away from their visit to a struggling West Ham side unscathed, having won 4-1 at the London Stadium last season.

Liverpool, also unbeaten, are at seventh-placed Watford while Arsenal, in fifth spot three points behind Tottenham, face a trip to the south coast to face Eddie Howe’s impressive Bournemouth side on Sunday.

Eighth-placed Manchester United have had two weeks to stew over their derby defeat at Manchester City and will be eager to make up ground when they host lowly Crystal Palace.

Our View: Less talk and more action needed on the ‘new economic model’