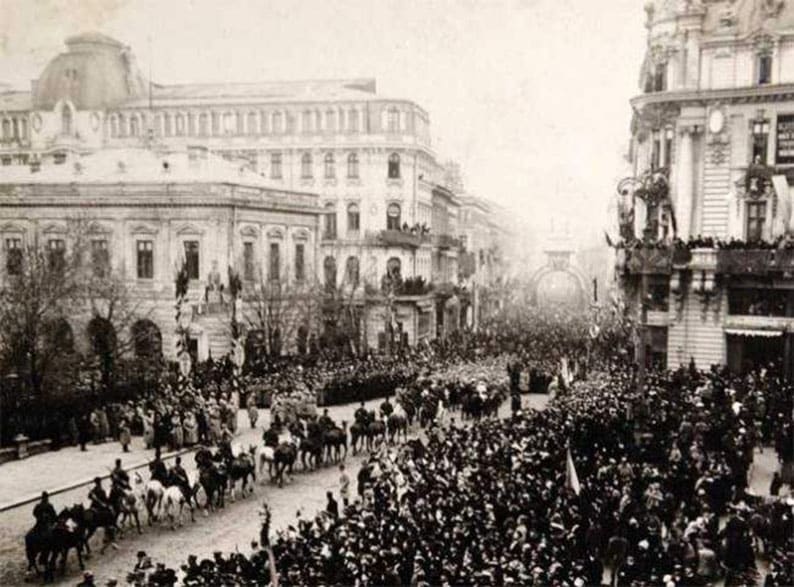 Celebrating in Bucharest in 1918

THIS month as we celebrate 100 years since the end of The First World War, historical reconstitutions and interpretations of it are different, and this is natural up to a point.

Even atrocities from the Great War tend to be blurred for recent generations accustomed to the bloody conflicts that were to come, mass murders, genocides and terrible suicide attacks.

However, a large number of historians and a big section of public opinion accepted the idea of the collapse of big empires of Central, Eastern and South-Eastern Europe – German, Austro-Hungarian, Russian and Ottoman – and the reunification of national states – under different forms of government of Poles, Romanians, Czechs, Slovaks, Serbs, Croats, Slovenes, Finns, Lithuanians, Latvians, Estonians, Hungarians and Austrians.

It is true that, instead of the Tsarist Empire, another multinational colossus was formed, the severe communist dictatorship of the USSR, which subordinated, in a new way, people and nations for another seven decades, but this is another story.

Romanians have borne throughout history, since they appeared in the 9th and 10th centuries, two ethnic names – an internal one given by themselves and an external one, given by foreigners. Romanians have called themselves Rumâni/ Români with the regional forms like Armâni, Rumeri, with a term that comes from the Latin word Romanus, and foreigners called them Vlahi/Wallachians with different forms like Blachi, Blaci, Olahi, Volohi, Vlasi, Ulagi, Ilaci, Iflaki from the name of the first Romanised Celtic tribe or Latin speakers Volcae.

The programme of forming modern Romania came about after the 1848-1849 Revolution through the three big principalities where Romanians were the absolute majority: Wallachia, Moldavia and Transylvania.

From 1859 to 1866 it comprised the union of Wallachia and Moldavia and the creation of the Principality of Romania, under the rule of Prince Alexandru Ioan Cuza, which was considered the modernisation of Romania according to Western-European principles.

From 1914-1918-1920, during and after the Great War, came the union of other Romanian provinces with Romania. Bessarabia was proclaimed as was the Independent Republic of Moldavia which, by the decision of the Country Council – the institution that functioned as Parliament elected by the population between Prut and Dniester – united with Romania on March 27 1918.

The Austro-Hungarian Empire created in 1867 survived a few more months and, on its ruins, peoples created or unified new countries such as Austria, Hungary, Czechoslovakia, Croatia, Poland, Romania, The Kingdom of Serbs, Croats and Slovenes.

In that context, between November 15 and 28, 1918, Bukovina – a part of Moldavia occupied by the Habsburgs in 1775, by the decision of the General Congress, become part of Romania.

At the same time, identical changes happened in other regions of Austria-Hungary and the Great National Assembly of Alba Iulia – around 100 000 people – through the votes of 1,228 delegates, decided on the unification of Transylvania, Banat, Crișana and Maramureș with the Kingdom of Romania.

The Paris Peace Conference from 1919 to 1920, after difficult negotiations, validated the decisions taken by Romanians in 1918.

In this vast territory, around three quarters of the inhabitants were ethnic Romanians, 8 per cent Hungarian, 4 per cent German and around the same percentage of Jews. The remainder were Slavs such as  Russians, Ukrainians, Serbs, and some Bulgarians, Romas, Greeks, Armenians, and Albanians.

After the First World War, for the first time in history, the majority of southern Slavic population lived in Bulgaria and in the Kingdom of Serbs, Croats and Slovenes in the Slavic countries. The majority of Polish people lived in Poland, Czechs and Slovaks in Czechoslovakia, Austrians in Austria, Hungarians in Hungary, Lithuanians in Lithuania, Latvians in Latvia, Estonians in Estonia, etc.

This meant the fulfilment of the national ideal, for which almost all the people mentioned above fought in the 18th and 19th centuries. The experience of the multinational empire had collapsed.

The Act of December 1, 1918, marked the end of a process by which the Romanian state was complete. On December 24, 1918, King Ferdinand issued a decree consecrating the union of Transylvania with the Old Kingdom of Romania, and in 1922, the official coronation of the sovereign and Queen Mary took place in Alba-Iulia.

Like the Romanians, and as a result of the national struggles for independence and of the circumstances following the First World War, the Finns, the Lithuanians, the Latvians, the Estonians, the Poles, the Czechs, the Slovaks, the Southern Slavs, the Hungarians, the Austrians, were also able to found their own national states.

All these massive changes in 1918, decided by the nations by virtue of their right to self-determination – as officialised in President Woodrow Wilson’s declaration of January 1918 – were officially acknowledged by the Great Powers at the Paris Peace Conference of 1919–1920. The separate treaties with Austria at Saint-Germain, Bulgaria at Neuilly-sur-Seine and Hungary (at Trianon) confirmed on the international scene the decisions of the Romanian people in 1918, namely Romania’s new boundaries.

It was the first time in history that the Great Powers took into account the will of the nations involved and not only their own interests, and accepted the new architecture of Europe.

The new political and territorial order in Central Europe after 1918 was propitious to national development, yet it also bore the seeds of rivalries and conflicts, that made themselves felt as revisionist tendencies became stronger. However, before the First World War, over 50 per cent of the ethnic communities in Europe lived as national minorities in other states. After the Great War, this proportion was reduced to approximately 25 per cent. Even for this reason alone, the new architecture of Europe after the First World War deserves appreciation.

Ioan-Aurel Pop is a Romanian historian, professor and rector of Babes-Bolyai University in Cluj, and president of the Romanian Academy. His work is focused on researching the medieval history of Romanians and of Central and South-Eastern Europe

Cyprus has high reporting rate but low convictions for rape