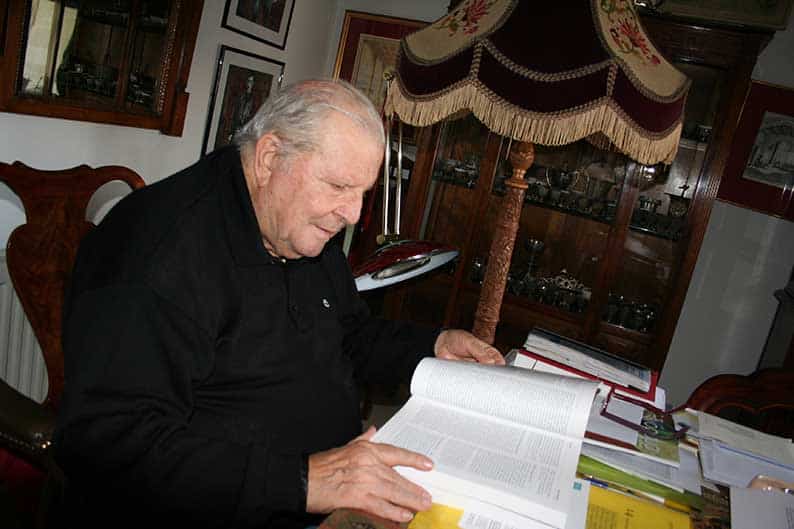 Aristeidis Koudounaris leafing through his Biographical Dictionary of Cypriots 1800-1920

Cyprus is a fascinating mosaic of nationalities and cultures, a heady mix that should be recorded in full, says Aristeidis Koudounaris, author of the “Biographical Dictionary of Cypriots 1800-1920”, which has just been published by the University of Nicosia.

The seventh edition of this “Who’s Who” of the significants in the history of Cyprus comprises two volumes and details the achievements of 1,100 eminent Cypriots born between 1800 and 1920.

“There are Greek Cypriots, Turkish Cypriots, Maronites, Armenians, Latins, British and Jews,” says Koudounaris with all the satisfaction of a prospector who has successfully located and mined the mother lode. The 82-year-old well-known genealogist, researcher and art dealer first ventured into his exploration of the history of the island’s prominent families in the early 1970s. At the time, he was writing his first book on the subject, “About the Old Families in Cyprus”, that focused on the old Ionian families who came to Cyprus in the 18th and 19th century.

“They were called Ionian because they all came from the Ionian islands, such as Kefalonia or Ithaka,” he explains.

“Ionians were traders, they were well-educated and spoke many languages and this really helped them a lot when they were building their fortunes in the region. Among those who came to Cyprus were ancestors of such well known families as the Pierides, the Peristianis, the Karidis, the Angelatos and the Lanitis. They settled mostly in Larnaca and, thanks to their linguistic skills, many were appointed foreign consuls. In that capacity, they were exempt from paying taxes to the Ottomans and this also contributed to their wealth,” Koudounaris notes.

That first publishing venture ran to a mere 50 copies but his research elicited huge interest and the inaugural book sold out very quickly. With a modicum of pride, Koudounaris points out how today the same book can change hands for upwards of one hundred pounds.

When I ask what prompted him to study the history of the Ionian families in Cyprus, he smiles and says it all began when he decided it would be helpful to set the record straight at a time when there was much debate going on about the origins of various Cypriots.

“My family is also Ionian. We trace ourselves back to the Karidi family who traded in grapes and raisins and came here from Kefalonia sometime in the 18th century,” he explains.

He hastens to add that his book on the Ionian families of Cyprus was not the sole inspiration for his decision to start working on a more detailed dictionary of prominent Cypriots. In the late 1970s, historian GS Georghallides approached him to write the bibliographical notes to his “Political and Administrative History of Cyprus 1918-1926” and that, he says, “was the real beginning”. It was where he first began to hone his research skills and learn how to accumulate information and sources from newspapers and books about Cyprus.

“So if you are a Karidi,” I ask, “where does the Koudounaris line come from?”

Without missing a beat, Aristeidis takes me on a guided tour, expertly unravelling the complexities of the family genealogical tree.

“My great grandmother Augusta’s maiden name was Karidis. She was a sister of Christodoulos Karidis, the first mayor of Limassol, though they were actually from Larnaca. However, Chrisodoulos, who was educated in Lebanon, married a girl from a good Greek family in Limassol and moved there.”

Augusta was to marry Nikodimos Georgiades from Kritou Terra. A nephew of Archbishop Damaskinos, Nikodimos was the first Cypriot to enrol and study to be a priest at the Rizarios School in Zagoria in Greece. However, having decided the priesthood was not for him, he switched to the University of Athens, and graduated after studying literature and theology.  It was on returning to Cyprus that he met and fell in love with Augusta and they married. They subsequently moved to Cairo where Georgiades went on to become the first principal of the Ambetios School.

Aristeidis continues the story: “Koudounaris was a very wealthy Greek Cypriot from Pedoulas who traded in wine, grapes, carob and bitter almonds. On one of his trips to Cairo, he met Augusta’s daughter Marigi and married her. He brought her to Cyprus to Limassol where he built a magnificent house for her in Irini Street. This house still belongs to our family and is now fully restored. Of course, with all the skyscrapers that are being built in Limassol nowadays it doesn’t seem as huge as before but it is still a very beautiful house.”

Greece, Lebanon, Cyprus, Egypt! It would appear that these old families moved about the whole East Mediterranean region with a lot more ease that we imagined, I comment. Koudounaris nods his head in confirmation.

“This is exactly what I mean when I say that Cyprus is a mosaic,” he says.

“So many people from all over the region met here. There was a family of Williamson from Smyrna who started an export business in Limassol and who, incidentally, also published a newspaper called Cyprus Herald. There were Turks too, like Famagusta’s deputy mayor Naim Efendi from Rhodes. Money was creating money and as people became wealthier they sought better education for their sons and daughters so they would send their children abroad to schools. Then succeeding generations would look to build on successful business ventures and so they would find new ways of making money.”

Koudounaris happily points out that Turkish Cypriot names form a significant chunk of the dictionary listings as he fondly reminisces about the past when the two communities lived together in peace.

“I have never understood why such a beautiful country with so much room for everybody has changed so dramatically,” he says. “For me, we are all Cypriots and to this day I keep in touch with many of my old Turkish Cypriot friends. I have a great respect for them and they have respect for me.”

He keeps on adding more and more names to his dictionary, researching new entries, and is already thinking of the next edition which will be the eighth in the series.

“There are Greek families who came from Turkey that I would like to include, for example the Zamboglus. They are not in the current edition because family details were not available until now although I well remember their grandmother when she came to Cyprus. She was so clever. She immediately opened a confectionery shop and we were all buying her toffees because each sweet wrapping included a piece of paper telling your fortune.”

Another he intends including in the next edition is the author Elsie Slonim. “She’s 101 years old, Jewish from Hungary, and has recently published two books.  I remember her from Limassol when she entertained there – she was such a beauty.”

I wonder how he manages to keep track and not get confused by all these names and their myriad histories and connections. Does he, I ask, maintain a large and definitive archive with everyone’s name, the story of everyone?

He laughs indulgently and with a smile confides: “Yes, I do – it is really huge – and when I finish with it I am actually thinking of presenting it to the historical library in Limassol.”

Bibliographical Dictionary of Cypriots 1800-1920 (Seventh Enlarged Edition) by Aristeidis L. Koudounaris, published by the University of Nicosia, 2018, in Greek.

Russia fires on and seizes Ukrainian ships near annexed Crimea

Mexico to deport migrants who ‘violently’ tried to cross the U.S. Border