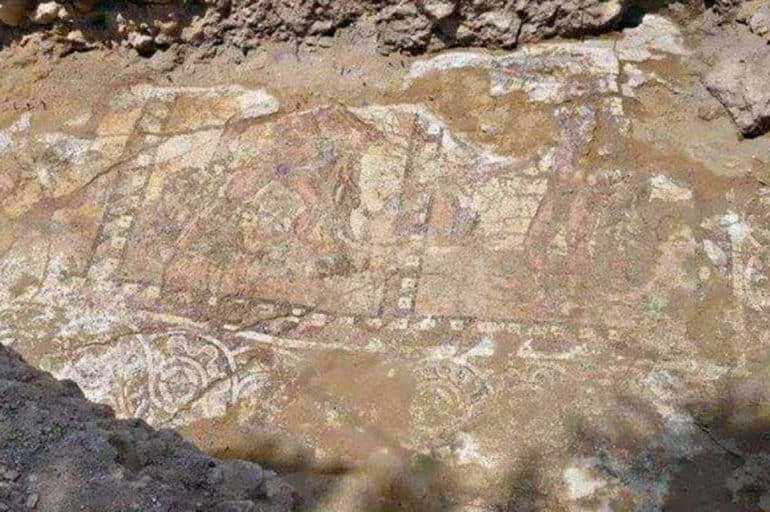 The 12 labours of Hercules are rapidly becoming 13, Larnaca mayor said on Monday in a wry reference to the ancient mosaics of the ancient Greek hero uncovered in the town two years ago that he says have caused havoc to the lives of residents ever since.

A solution must be found mayor Andreas Vyras said, blaming the authorities for not moving swiftly enough to excavate the area which has been sealed off since 2016.

The rare mosaics from the second century AD include a Roman public bath with a floor depicting the 12 feats of Hercules.

The antiquities were discovered while the Larnaca sewerage board was carrying out road works in the area in 2016.

However, excavations have been hampered because much of the site is under an old, uninhabited and abandoned house which needed to be demolished.

Then transport minister Marios Demetriades announced at the time funds were going to be made available so the excavation could proceed.

Until the necessary procedure for the expropriation of the building was completed it was decided to cover the mosaics with sand and close a large part of the road, causing problems for residents.

“What is happening is unacceptable because for 14 months the expropriation of the abandoned house should have proceeded, which has not been done,” the mayor said.

When he asked the authorities recently what progress had been made, he was told the expropriation had not moved forward.

This happened “by mistake”, he was told.

“We have not understood what the responsible people mean by ‘by mistake’, but it seems that we cover all our shortcomings, our weaknesses with the words ‘by mistake’ in Cyprus,” he said. “The 12 labours depicted in the mosaic will become 13 because of the bureaucracy of the public service, since it will be a feat to be able to overcome these issues.”

He said that the closed-off area is in a lively neighbourhood in the city centre.

“The inhabitants send distress signals because even the simplest everyday things, such as the transport of garbage, shopping, furniture, even cut grass from their gardens are difficult, given that much of the road has been closed and they are forced to their park their vehicles far away.”

The life of the residents of the area has become intolerable, he said, adding that he hoped that the house will be expropriated so excavations can continue.

He said he had held meetings with the director of the department of antiquities and the head of the land registry who assured him that everything will be done to ensure there are no more delays, but will also temporary solutions to the everyday problems of the residents.

The municipality would like the mosaics to stay in their original location, but if this is not possible and it has to be moved, they should still stay in Larnaca.

There are plans to excavate the harbour of ancient Kiti, for which the tennis courts in the area have started to be removed. The aim is for this to become an archaeological site including the museum, the harbour and the mosaics.

More TCs from UK travelling to north via Republic

Farrell to replace Schmidt as Ireland coach after World Cup