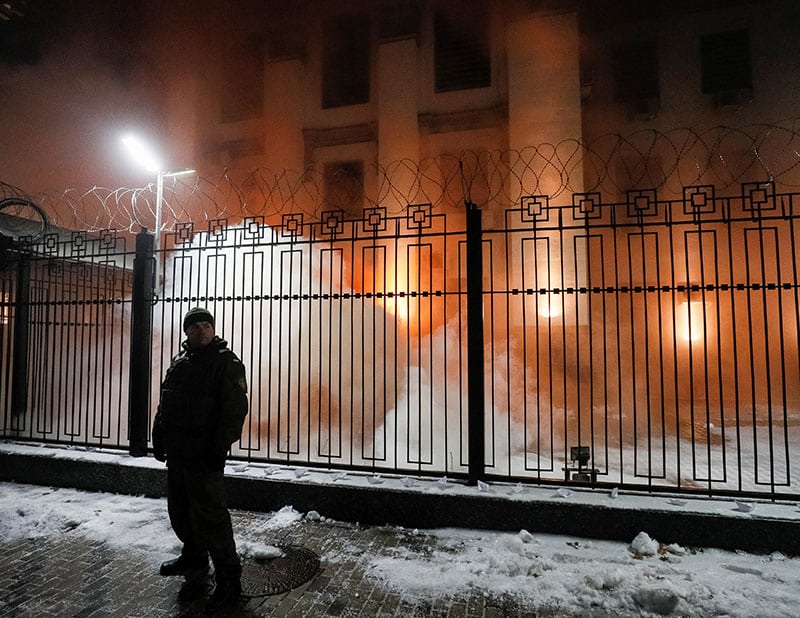 Protesters throw flares at the Russian embassy in Kiev

Russia resisted international calls on Monday to release three Ukrainian naval ships that its border patrols had fired on and seized near Crimea at the weekend, triggering the most dangerous crisis in years between Moscow and Kiev.

With relations still raw after Russia’s 2014 annexation of Crimea from Ukraine and its backing for a pro-Moscow insurgency in eastern Ukraine, the incident risks pushing the two countries towards a wider conflict and is likely to renew Western calls for more sanctions on Moscow.

Russia’s FSB security service said its border patrol boats had seized two small Ukrainian armoured artillery vessels and a tug boat after opening fire on them and wounding several sailors on Sunday. It said it had opened a criminal case into what it called the ships’ illegal entry into Russian territorial waters.

A spokeswoman for the Russian foreign ministry, Maria Zakharova, accused Ukraine of sending the ships to deliberately provoke Russia and said the ranking diplomat at Kiev’s embassy in Moscow would be summoned over the incident.

Kiev denied its ships had done anything wrong and accused Moscow of military aggression. Ukraine’s parliament was due to consider a proposal later on Monday to impose martial law for 60 days after President Petro Poroshenko met his top military and security chiefs on Sunday night over the crisis.

Russia’s rouble currency opened 0.4 percent weaker against the dollar in Moscow, its lowest since mid-November, while Russian dollar-bonds fell.

The narrow Kerch Strait links the Black Sea and the Sea of Azov, dividing Crimea from southern Russia. After annexing Crimea, Russia built a giant road bridge across the Strait, increasing its control of the waterway.

The crisis began on Sunday after Russia stopped the three Ukrainian ships from entering the Sea of Azov by placing a cargo ship beneath the bridge. Ukraine said a Russian ship had earlier rammed its tug boat in a failed to attempt to stop it.

Russia said the flotilla had not notified it in advance of its plans and had ignored warnings to stop while manoeuvring dangerously. Navigation resumed on Monday after Russia removed the cargo ship blocking the Strait.

A bilateral treaty gives both Russia and Ukraine the right to use the Sea of Azov, which is home to two of Ukraine’s most important ports.

A Reuters witness in Kerch, a port in Crimea, said the three Ukrainian vessels were being held there.

The FSB said three Ukrainian sailors had been wounded in the incident and were getting medical care, adding that their lives were not in danger.

The U.N. Security Council will meet on the latest developments at the request of Russia and Ukraine later on Monday, diplomats said.

The European Union said it expected Russia to restore freedom of passage via the Kerch Strait and urged both sides to act with the utmost restraint to de-escalate the situation. A NATO spokeswoman issued a similar appeal to both sides.

Poland, Denmark and Canada condemned what they called Russian aggression.

Any decision to impose martial law in Ukraine would be unpopular in some quarters as it would curb civil liberties and give state institutions greater power ahead of a presidential election next year which polls indicate Poroshenko would lose.

Protest outside Pournara reception centre ‘a concern’ for interior ministry