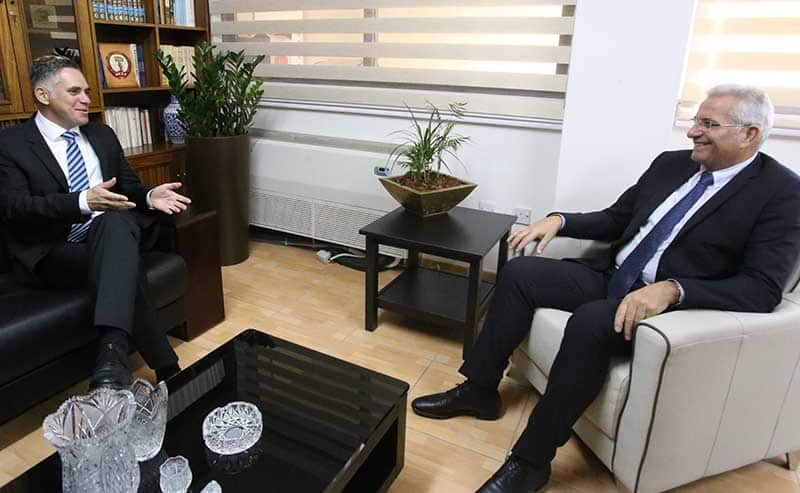 The leaders of left-wing Akel and centre-right Diko met on Tuesday to try and find common ground despite their ideological differences on the Cyprus issue and divergences on economic policy.

Asked by reporters whether the meeting was held to “send a message” to President Nicos Anastasiades to return to the agreed basis for talks on a Cyprus solution, Akel’s Andros Kyprianou said his party had sent that message to the president numerous times recently. Kyprianou is due to meet Anastasiades on Thursday to brief him on the former’s meeting last Thursday with Turkish Foreign Minister Mevlut Cavusoglu in Turkey.

Kyprianou said Akel disagreed with Diko’s view that Anastasiades’ approach to the negotiations had failed whereas in his view, the president had simply not handled it well over the past two years.

Both Kyprianou and Diko’s Nicolas Papadopoulos agreed however that Anastasiades has not convinced any of the political parties, who are members of the National Council, when it came to his notion of a decentralised federation as opposed to the agreed bizonal bicommunal federation.

“Everyone can understand that something other than that was being put on the table,” said Kyprianou.

Kyprianou described it as a productive meeting as saying that no one doubts that the Cyprus issue is in an extremely critical phase and that there is a need for the two parties to try and jointly deal with the situation.

“And the common basis in which we can cooperate we consider to be the timeless decisions of the National Council which are binding for us and are the basis upon which we should strive to achieve a solution to the Cyprus problem,” he said.

“Our aim is to focus on those issues where we have a common approach. Even though the priorities are sadly different for us, in the matter of a two-state solution or confederation, we consider both options disastrous.”

Papadopoulos also described the meeting as useful “with full respect for the differences in the past on the Cyprus issue”. He said that his party considers the failure of Anastasiades’ policies meant it was necessary for the two parties to focus on areas where they do agree.

“And… these are the unanimous decisions of the National Council and the agreed framework of resolution on the basis of the bizonal, bicommunal federation,” he said. “This is an exchange of views to find those initiatives that will allow us to get out of today’s quagmire and deadlock.”

However it did not mean Diko was changing its long-standing and fixed policy on the Cyprus issue. “It is perfectly legitimate to disagree on individual aspects and on provisions,” he added. But the idea of a two-state solution or confederation was a “political crime”.

On socio-economic issues, the two party leaders spoke of cooperating for the benefit of the many and not the chosen few.

“I think that the conditions at the moment in Cyprus require that we seek conciliation between Akel and Diko,” said Kyprianou.

“We are two parties that have worked in the past in a way that is beneficial for the Cypriot people and our country, and I think that if slowly we find the way to work together in those areas it will make the lives of the people better as a whole.”

Papadopoulos expressed his party’s readiness to cooperate with all political forces in parliament, including Akel, recalling that past cooperation has made it possible to achieve social goals.

European politicians call for new sanctions on Russia over Ukraine