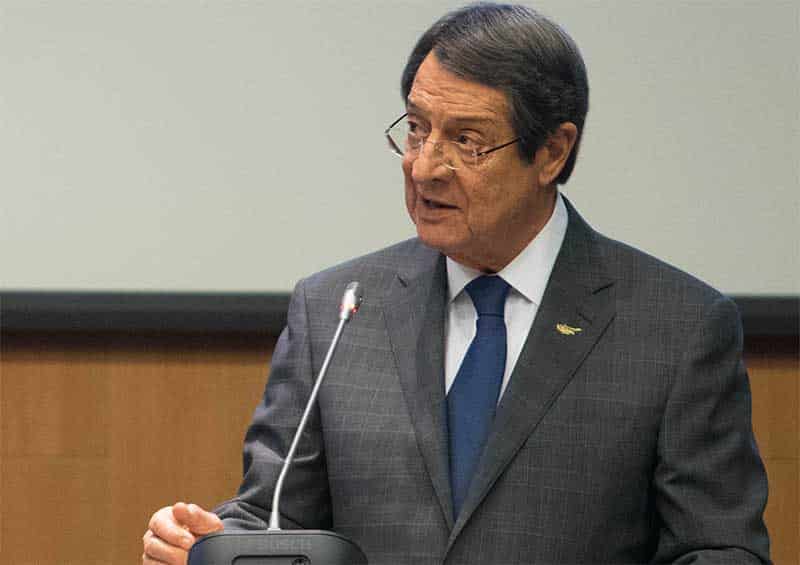 President Nicos Anastasiades on Tuesday went on the defensive when it came to his policy on the Cyprus negotiations as he appeared to be facing mounting opposition and distrust.

He was slammed on Monday by main opposition Akel leader Andros Kyprianou who launched a new volley of criticisms on Tuesday after he met Diko leader Nicolas Papadopoulos.

The two parties do not see eye-to-eye on the Cyprus issue ideologically but the unlikely duo agreed to join forces on aspects where they could agree in order to pressure the president to get back on track towards a bizonal bicommunal federation (BBF) and to ditch his talk of a decentralised state.

They accused him of still not coming clean on what this actually means, and of wheeling and dealing behind closed doors, including with Turkish Foreign Minister Mevlut Cavusoglu, on tabling an alternative to a BBF.

Anastasiades has also been criticised this week by Turkish Cypriot leader Mustafa Akinci who has accused him of saying one thing in private and another in public.

Proponents of a BBF believe Anastasiades has gone off script and has, behind closed doors in high places, been discussing offloading more powers to the constituent states than would happen under a BBF. Critics argue that this would essentially mean confederation, not federation, which would eventually lead to permanent partition.

After Kyprianou’s attack on Monday, Anastasiades abruptly responded later in the day that he did not wish to comment on information coming from Akel.

He said he expected Kyprianou to brief him on his meeting last Thursday night with Cavusoglu in Turkey “as he ought to, so that I would feel encouraged, if there are the prospects, which he is urging me to follow, for a new dialogue.”

Kyprianou responded on Tuesday saying he would meet Anastasiades on Thursday and brief him because he considered it his duty but at the same time could not ignore the fact that Anastasiades did not ask for a meeting before the Akel leader travelled to Ankara.

He also said that when Anastasiades spoke of a ‘loose federation’, he had told the National Council he had not yet decided what powers and responsibilities of the federal government would go to the constituent states.

“Does anyone really believe that the president is so irresponsible and so casual as to make a proposal to Cavusoglu without knowing what he meant when he submitted it, or does he have in mind what he wants to transfer [to the two constituents] but he does not tell us because he knows we will react?” said Kyprianou.

“Where there is smoke there is fire and whatever Mr Anastasiades says, does not convince us that he has not addressed these particular issues,” he added.

On Tuesday at an event in the morning, Anastasiades, referring to an interview Cavusoglu had with Politis on Sunday, said it was clear that what he himself said publicly was what he had discussed with Cavusoglu. “This is a clear answer to the criticism against me,” Anastasiades said.

The two had met in New York on the sidelines of the UN General Assembly in September, though the government remained quiet about it for weeks.

“Mr Cavusoglu’s and Turkey’s positions on security issues have been well known since [talks in] Geneva, Mont Pelerin, and later in Crans-Montana when he [Cavusoglu] said that we [Greek Cypriots] should wake up from the dream that the guarantees could be abolished. He repeated it recently. Some may hear it, some may not want to hear it,” said Anastasiades. He added that the Turkish Cypriot side felt the same way as Ankara about maintaining the Turkish guarantee.

Akinci said on Monday night in an interview with CNN Turk that he had been surprised lately at what he called “a switch in the Greek Cypriot side’s official position”.

“For years we [Turkish Cypriots] argued in favour of a federation in which more powers resided with the constituent states. The Greek Cypriots had argued the opposite. They had supported a federation with a stronger centre and weaker constituent states. Now all of a sudden, Anastasiades came up with this. We are not closed to this idea. I have said this from day one. We are ready to discuss a process which will not be open-ended. I would like to underline this because the Greek Cypriots want the continuation of the status quo,” Akinci said.

The Turkish Cypriot leader said that at his last meeting with Anastasiades he had commented on the two-state solution because he learned that Anastasiades had given this message to Cavusoglu in Crans-Montana. “We discussed this at our following meeting. Mr Anastasiades says some things behind closed doors but then he does not continue to support what he says publicly, and I think he said this in New York very clearly to Mr Cavusoglu. You cannot develop a policy based on what is said behind closed doors and then change it. Even in public he says he did not say ‘loose federation’ but ‘decentralisation’.”

Meanwhile, Anastasiades announced that UN envoy Jane Holl Lute will be having contacts in Athens and Ankara on December 4 and 5 respectively and is then expected to return to Cyprus. The UN chief Antonio Guterres wants the two leaders to come up with terms of reference for new talks by the end of the year. “The terms of reference will be agreed on by all parties, and therefore it is not a matter of what each side would demand,” he said.

Use of TC properties could be passed to refugee descendants