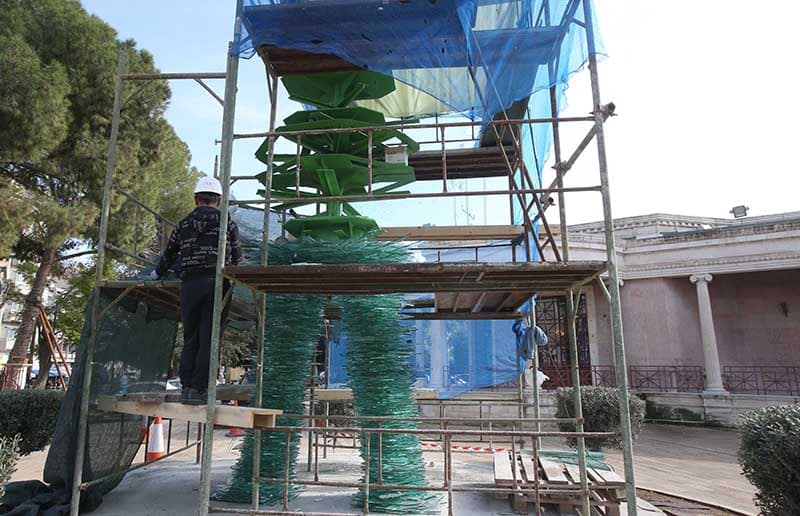 The Poet, a glass sculpture by renowned Greek artist Costas Varotsos that was long hidden away behind Nicosia’s Famagusta Gate is now being rebuilt in the centre of the capital, right in front of the municipality and next to Eleftheria square.

Workers are assembling the structure and Varotsos, who is supervising the work, said on Tuesday it will be ready in five to six days. The piece of art will now have a direct relationship with people instead of being closed in at the gate, he added.

He also explained why the sculpture is made of glass layers. “How is the poet? The poet is fragile, sharp, aggressive, suicidal. And when I thought about a material that could concentrate all those traits, I came up with glass.

“I was also interested in the balance of space and time. I wanted to find a way to overcome the space and time imbalance due to the exaggeration of the concept of speed in our modern time, creating a space-time gap.

“The Poet is also an example of this balance. Glass is like a piece of space through which lights shines. But if you put one piece of glass on top of another, it is like counting: one, two, three, four. That is time. So, it doesn’t only represent the concept of the poet, it also represents a space-time balance.”

It will be a better version of the Famagusta Gate sculpture, which was the first glass sculpture the artist ever created. Since 1983, when it was erected, the sculptor has created many more which are now displayed in Italy, the USA, Switzerland and other places around the world.

One of the most famous is the 11-metre tall The Runner which has had a prominent place in the centre of Athens, in front of the Hilton hotel, since 1988.

Varotsos says as the Nicosia one was his first, “it was not perfect technology. It survived for 36 years and needs some restoration.”

So this time, though the same skeleton of the Famagusta ‘poet’ was used, it has been reinforced and painted. New glass is being cut replacing the old – and very dirty – glass of the original piece.

And it will be possible – though not easy – to clean the glass layers with special chemicals, and this will be done once a year.

The artist chose the place between the municipality and Eleftheria square for a reason. He was originally asked by architect Zaha Hadid to build it on the square, and after she died Nicosia Mayor Constantinos Yiorkadjis made the same request.

He decided instead of placing it in front of the municipality to connect it to a historical building as well as the contemporary buildings in the area and the modern square.

Our View: Only way to get drivers to ‘Think’ is increase penalties