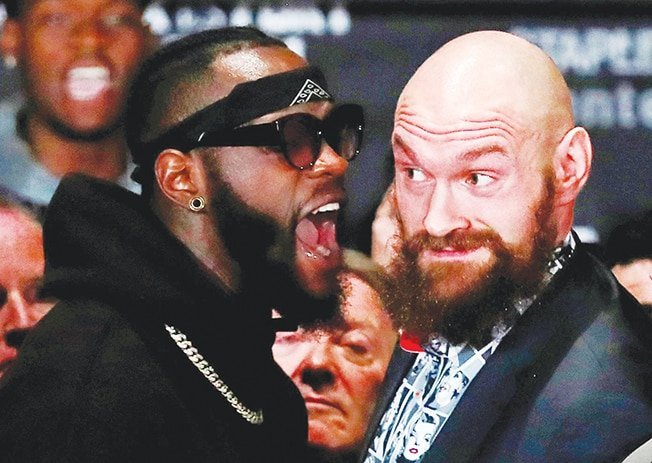 Tyson Fury and Deontay Wilder had to be separated at the heated final press conference for Saturday’s WBC heavyweight title fight – which ended with Fury topless and taunting the champion.

The 33-year-old Wilder cut an increasingly tense figure as Fury – smiling until its angry conclusion – gradually spoke and shouted over him, demonstrating the challenger is also the significantly more confident of the two.

A largely unremarkable affair began to change in nature when Fury – speaking on the three-year anniversary of his career-best victory over the great Wladimir Klitschko – stood up and gradually began to goad the undefeated American.

It was then that Wilder’s unhappiness began to build, and when they stood for their face-off he angrily shouted at Fury, who remained relaxed as he shouted back until his promoter Frank Warren got between them in an attempt to calm the situation.

At that point one of Wilder’s entourage – as sizeable as Fury’s – threw a shove in Fury’s direction and those with each fighter responded by doing the same until they were gradually separated as Fury removed his shirt and continued to shout.

Observing the apparent nerves among Wilder and his team as a sign of weakness, Fury said: “He’s definitely rattled; he’s nervous and he’s on edge. I’m going to make him look like the clown he is.

“He knows he’s going to lose. I keep saying it, ‘let the fighters talk’ and he’s got his family to jump in.

“He looked very nervous, I didn’t instigate that, he did. He was shouting, screaming and everything. That was exciting, wasn’t it? He knows he can’t outbox me, so he was trying to get personal.

“He’s trying to psych himself up for the fight but I’m relaxed, I’m a born fighter.”

Before their face-off it had perhaps also angered Wilder when the 30-year-old Fury had suggested even those around him had set him up for a defeat at Los Angeles’ Staples Center as he said: “On Saturday the whole world will know Wilder.

“He couldn’t make it in (American) football or basketball, because he wasn’t good enough. Fighting’s all I’ve ever done. Wilder came to this as a third option. It ain’t genuine – he’s a fake and a fraud.”

In response, Wilder dismissed Fury as having had “his time” when he stunned Klitschko, who he also insisted had “beaten himself”.

“This is my time. Fury had his – when he beat Klitschko that was his window to do whatever he had to do. How he took upon his responsibilities as a champion was up to him. But now it’s my time.

Despite resignations, health minister says Gesy is on track