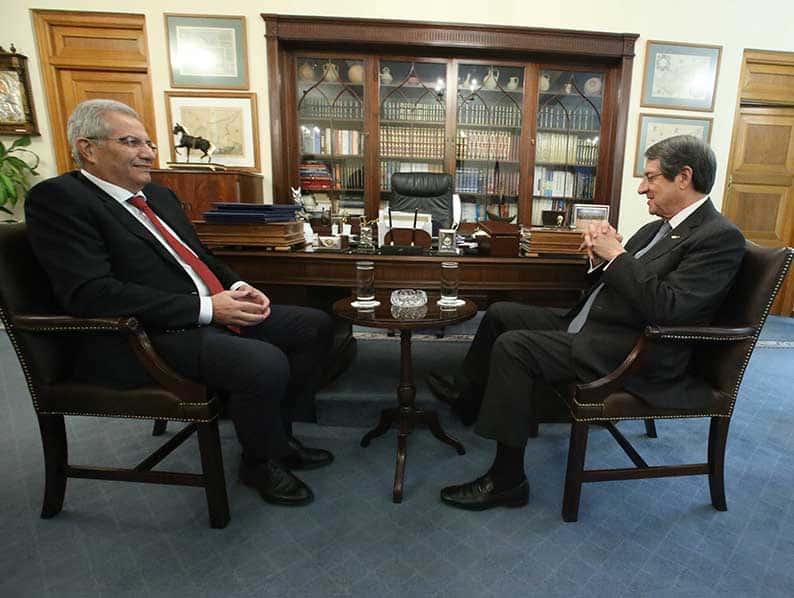 Akel chief Andros Kyprianou said the president’s suggestion that he was putting party above country was insulting and he challenged Nicos Anastasiades to have the courage to say so if he thought the current deadlock in the talks was an option.

Speaking after a meeting with the president on Thursday morning, Kyprianou called on those who considered the deadlock in the talks an option to tell the people and assume the responsibility, suggesting the president was one of them.

“They should be brave and say it and not hide behind sophistry and tactics,” Kyprianou said.

The Akel leader did not name Anastasiades but it was the president who came up with the idea of a loose or decentralised federation out of the blue recently, raising questions about his apparent departure from a negotiating line followed by the Greek Cypriot side for decades.

Kyprianou said Akel has proven in deed that it is a patriotic party that puts petty politics aside and the country’s interests first.

He said it was ruling Disy that criticised former president Demetris Christofias for his positions on the Cyprus problem, which they later adopted when Anastasiades took over the negotiations after his election.

“Akel selflessly supported the procedure in spite of the political cost, just because it puts the country above petty political interests,” Kyprianou told a news conference after the meeting.

“I just want to tell him that we supported the same things we support today at the time and he was calling us patriots while today he is trying to teach us lessons in patriotism and ethos. We do not need these lessons,” Kyprianou said.

The spat between the two men was sparked by Akel’s criticism of the president following the collapse of the talks in the summer of 2017.

The party suggested it was Anastasiades who sought the deadlock and he was now dragging his feet instead of pushing for resumption of the talks.

Kyprianou challenged Anastasiades and ruling Disy to publicly say what the unacceptable concessions the party had asked him to make, especially on security and guarantees.

“And I will remind him that I put this question to him during a national council session and he replied and his response is recorded in the minutes. I am reminding him so that he says the same things,” the Akel leader said.

It was Christofias who first raised the issue of scrapping guarantees and Turkey’s rights to intervene and this is the position supported by Akel to date,” Kyprianou said.

“It won’t accept a solution that does not secure these things.”

Kyprianou reiterated that the only way to reunify the island was through a bicommunal bizonal federation and if anyone attempted introducing something else, Akel would be in the front line of resistance.

Government spokesman Prodromos Prodromou responded saying the president would like to see an end to “this unwarranted climate of tension”.

“We must focus on the effort of shaping the terms of reference together with Ms. Lute,” he said, referring to the UN chief’s envoy who is due in Cyprus late next week after visiting Athens and Ankara on December 4 and 5. The two leaders must come up with terms of reference by the end of the year for new talks to proceed.

Electric car charging stations islandwide by end of next year