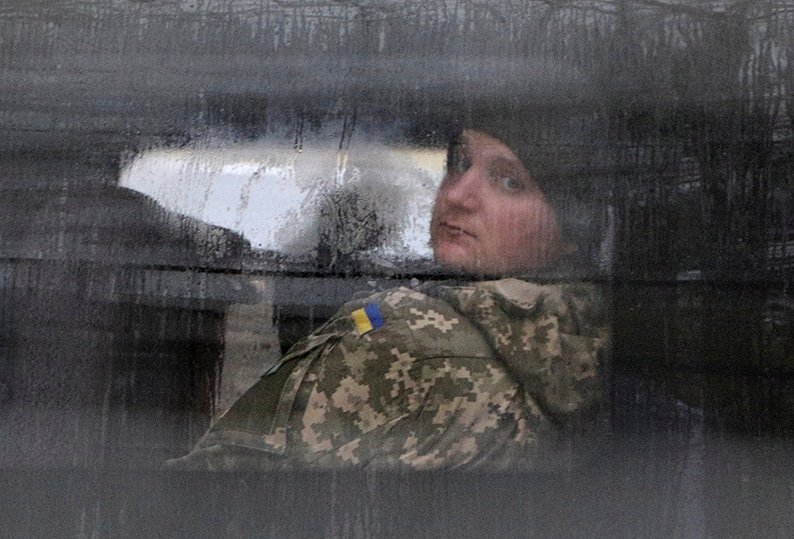 A detained Ukrainian serviceman and crew member of one of Ukrainian naval ships, which were recently seized by Russia's FSB security service, looks out of a minibus window outside a court building in Simferopol, Crimea November 28, 2018

Ukrainian President Petro Poroshenko accused Russia’s Vladimir Putin on Thursday of wanting to annex his entire country and called for Nato to deploy warships to a sea shared by the two nations.

Poroshenko’s comments to German media were part of a concerted push by Kiev to gain Western support for more sanctions against Moscow, securing tangible Western military help, and rallying opposition to a Russian gas pipeline that threatens to deprive Ukraine of important transit revenues.

His Western allies have so far not offered to provide any of these things, despite his warnings of a possible Russian invasion after Moscow seized three Ukrainian naval ships and their crews on Sunday near Crimea.

Moscow and Kiev blame each other for the incident, which took place in the narrow Kerch Strait off Crimea, the Ukrainian region annexed by Russia in 2014.

“Don’t believe Putin’s lies,” Poroshenko told Bild, Germany’s biggest-selling paper, comparing Russia’s protestations of innocence in the affair to Moscow’s 2014 denial that it had soldiers in Crimea even as they moved to annex it.

“Putin wants the old Russian empire back,” he said. “Crimea, Donbass, the whole country. As Russian tsar, as he sees himself, his empire cannot function without Ukraine. He sees us as his colony.”

Putin has accused Poroshenko of manufacturing the crisis to boost his flagging ratings ahead of next year’s elections in Ukraine.

Volodymyr Omelyan, Ukraine’s infrastructure minister, said on Thursday Russia had imposed a de facto blockade on two Ukrainian ports on the Sea of Azov by barring ships from leaving and entering the sea via the Kerch Strait.

The Kremlin denied it was restricting shipping, saying it had not heard of any problems. If there were any delays they were due to bad weather rather than politics, it said.

Poroshenko told Bild he also wanted Nato to deploy warships to the Sea of Azov. Ukraine is not a member of the US-led military alliance.

Nato, which has condemned Russia’s seizure of the Ukrainian ships, did not immediately respond to a request for comment, while German Chancellor Angela Merkel said she thought there was no military solution to the crisis.

The Kremlin said Poroshenko’s request appeared to be aimed at increasing tensions in the area.

The prospect of Nato warships heading to the Sea of Azov seems remote as it is shallow, access to it is controlled by Russia, and the Kremlin would likely view any attempt by the Atlantic alliance to deploy there as a hostile act.

Poroshenko, who has temporarily imposed martial law in parts of Ukraine over the crisis, also tweeted on Thursday that he would impose unspecified restrictions on Russian citizens in his country. He spoke of banning some foreign currency and banking operations in Ukraine.

Ukraine’s border service said it would only allow Ukrainian citizens to travel to Crimea via its land border with the annexed territory, while the head of the Ukrainian navy said Kiev would try to get Turkey to close the Bosphorus Strait to Russian ships.

There were further signs that Russia was pressing ahead with its plans to fortify Crimea and turn it into what Kremlin-backed media have called a fortress.

Citing a Crimean security source, Interfax news agency also reported Russian plans to build a new missile early-warning radar station in Crimea next year that would be able to track ballistic and cruise missiles from a long distance.

Russia was also working on a new technical system to allow it to better track shipping around the peninsula in order to protect its maritime borders, Interfax said.

The United States and the EU have imposed sanctions on Russia over its conduct towards Ukraine since 2014, when Moscow seized and annexed Crimea after a pro-Russian leader was toppled in Kiev.

Moscow later backed pro-Russian separatists in eastern Ukraine in a conflict in which more than 10,000 people have been killed. Major fighting ended with a 2015 ceasefire but deadly exchanges of fire are still frequent.

Poroshenko urged Berlin to halt an undersea pipeline project that would allow Russia to supply more gas to Germany directly.

The Nord Stream 2 project is a potentially serious problem for Ukraine, which currently earns large transit fees from piping Russian gas to Europe and stands to lose out.

But Germany’s economy minister, Peter Altmaier, dismissed the idea that his country’s commitment to the pipeline undermined efforts to de-escalate the Ukraine crisis.

Poroshenko’s attempts to persuade the EU to impose new sanctions on Russia are also unlikely to bear fruit any time soon, diplomats say, given divisions within the bloc over how to deal with Moscow.

Merkel said she would raise the Black Sea issue with Putin at a G20 summit which starts in Argentina on Friday. Putin is also due to hold talks there with US President Donald Trump.

Kyprianou challenges president to be honest

Shoppers in England ordered to wear face coverings from July 24

UK economy begins tepid recovery in May after record slump