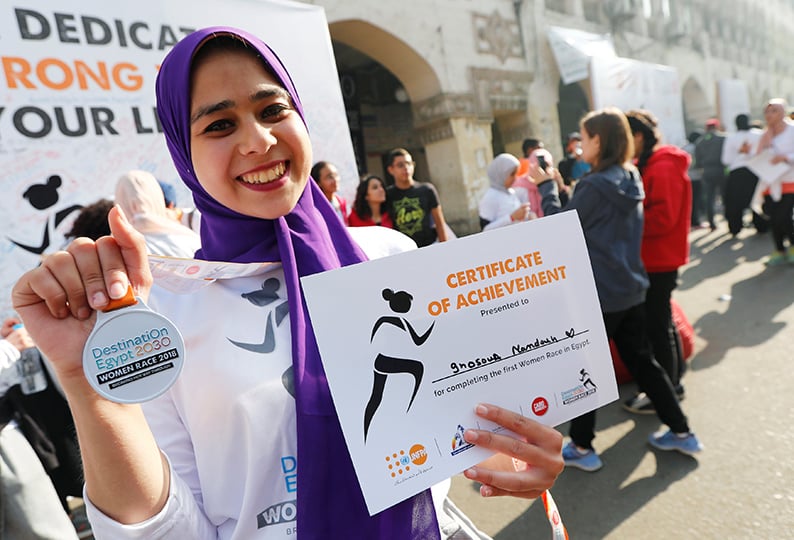 Ghosoun Mamdouh, a 21-year-old holds her medal after finishing the first Egyptian womens' race, to raise awareness about violence against women, in Cairo

Hundreds of women took part in a race in the Egyptian capital Cairo on Friday to campaign for an end to violence against women and push for acceptance of women running in public spaces.

In the first event of its kind, women challenging conservative social norms took advantage of reduced weekend traffic to compete on an eight-kilometre course in the neighbourhood of Heliopolis.

“I came to this race today so that all women can run in the street without any fears or worries,” said 52-year-old Amany Khalil, who placed third, completing the course in just under 39 minutes.

Experts surveyed by the Thomson Reuters Foundation last year ranked Cairo as the world’s most dangerous megacity for women, based on a lack of protection from sexual violence and harmful cultural practices, as well as access to healthcare and finance.

It is uncommon for women to practice sport in Egypt in public places, where they regularly face harassment.

“This is the first event for girls only,” said 24-year-old Yasmin Mamdouh, who competed alongside her younger sister.

“It’s to say that we can do anything and run freely, and do what they do, boys. No one can bother us and stop us from doing what we want.”

Protest on Sunday at presidential palace over spiralling rents

Israel reacts to spyware scandal after journalists are hacked