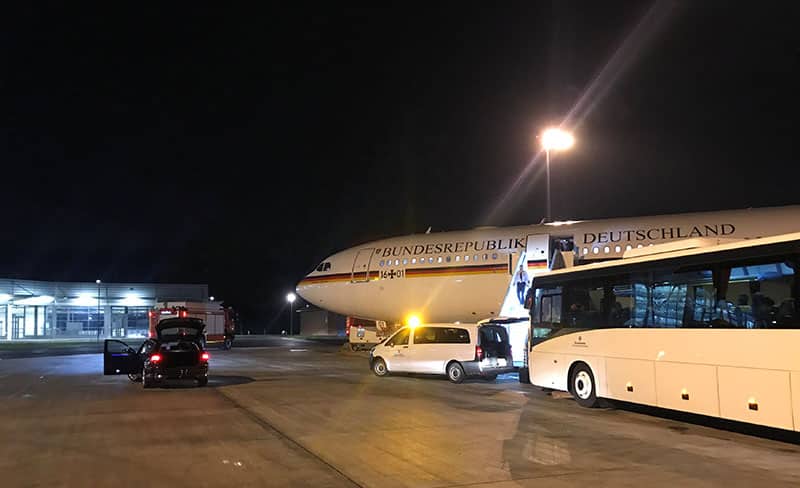 The Airbus A340 government aircraft carrying Chancellor Angela Merkel and the German delegation to the G20 summit in Buenos Aires which was forced to land shortly after taking off from Berlin sits at the Cologne-Bonn airport, Germany

Trump said he pulled out due to tensions over Russian forces opening fire on Ukrainian navy boats and then seizing them and their crew on Sunday near Crimea, which Russia annexed from Ukraine in 2014.

His decision also comes as a federal investigation into his 2016 election campaign’s ties to Russia is intensifying. Trump’s former lawyer Michael Cohen pleaded guilty on Thursday to lying to Congress about a proposed Trump real estate project in Russia.

“Based on the fact that the ships and sailors have not been returned to Ukraine from Russia, I have decided it would be best for all parties concerned to cancel my previously scheduled meeting in Argentina with President Vladimir Putin. I look forward to a meaningful Summit again as soon as this situation is resolved!” Trump tweeted.

Trump’s tweet, from aboard Air Force One shortly after takeoff from Washington on the way to Buenos Aires for a Group of 20 summit, was a sudden turnaround.

Roughly an hour earlier, he had told reporters he would probably meet with Putin at the summit and said it was “a very good time to have the meeting.”

Trump’s cancelation marked a dramatic change in tone. In the past he has repeatedly stressed his desire for a warm relationship with Putin. When the two leaders met in Helsinki in July, Trump refused to criticize Putin and drew fire at home.

His announcement appeared to catch Moscow by surprise, with Russian officials getting their first news of it from the media.

Kremlin spokesman Dmitry Peskov told RIA news agency that the Kremlin regretted Trump’s decision and said Russia is ready for contact with him.

“A cancellation means that the discussion on key international issues is being postponed indefinitely,” Peskov said.

Trump based his move on advice from senior advisers who have taken a harsher tone toward Russia than he has. He was briefed on Air Force One by Secretary of State Mike Pompeo, White House chief of staff John Kelly and national security adviser John Bolton, White House spokeswoman Sarah Sanders said.

Bolton has pushed for Trump to withdraw the United States from the Cold War-era Intermediate-Range Nuclear Forces treaty over what US officials called Moscow’s violation of it.

US officials are watching with alarm the crisis surrounding Ukraine.

Ukrainian President Petro Poroshenko on Thursday accused Putin of wanting to annex his entire country and called for Nato to deploy warships to a sea shared by the two nations.

Holding talks with Putin now could represent bad optics for the White House at a time when the president is under scrutiny over prior plans to build a Trump Tower in Moscow.

Cohen pleaded guilty on Thursday to lying to Congress about the proposed Trump Organisation skyscraper in Moscow, prompting Trump to lash out at Cohen as a “liar” and “weak person.”

Differences over Ukraine, as well as Moscow’s role in the civil war in Syria, have been an irritant in US-Russian relations for years.

Meanwhile German investigators are checking whether there was any criminal cause behind the malfunction of a plane carrying Chancellor Angela Merkel to the G20 summit in Argentina, German newspaper Rheinische Post reported on Friday, citing security sources.

Merkel was on her way from Germany to the summit when the government’s Airbus A340 made an unscheduled but safe landing at Cologne-Bonn airport late on Thursday.

Merkel called the incident a “serious malfunction”. She and German Finance Minister Olaf Scholz were due to resume their travel to Buenos Aires early on Friday, but they will arrive after G20 leaders start their discussions.

Rheinische Post, citing security sources, said the government was checking whether the incident had a “criminal background”, though the sources added that investigators would typically look “in all directions” after such an incident.

Energy and defence the focus of Serbian meeting (Updated)

Australian kids walk out of school to protest climate inaction