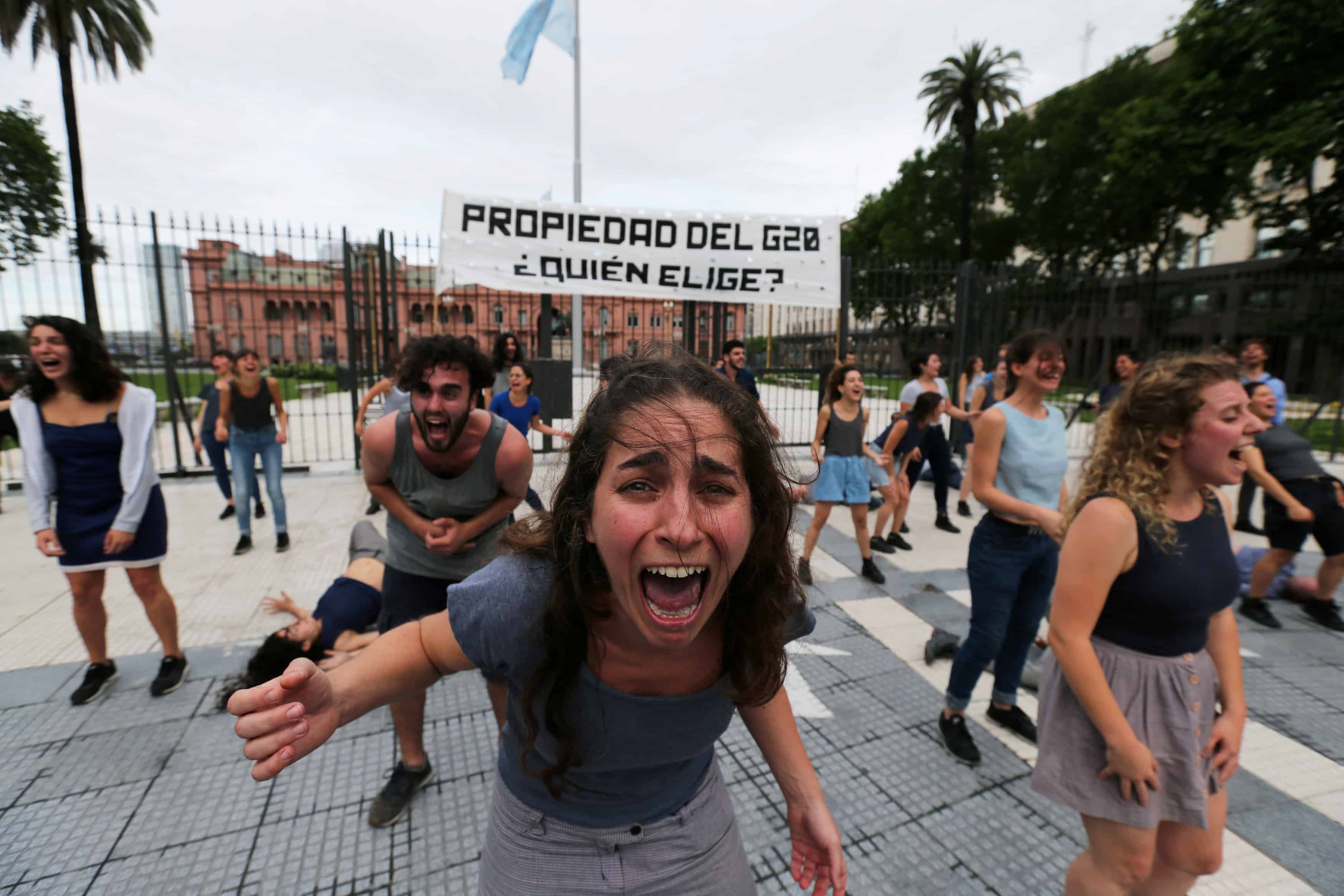 Demonstrators perform outside the presidential palace, ahead of the Group 20 summit, in Buenos Aires

The leaders of the world’s top economies gathered in Argentina on Friday for talks overshadowed by a U.S.-China trade war that has roiled global markets, bracing for the kind of geopolitical drama US President Donald Trump often brings to the international stage.

The two-day annual gathering will be a major test for the Group of 20 industrialised nations, whose leaders first met in 2008 to help rescue the global economy from the worst financial crisis in seven decades. With a rise in nationalist sentiment in many countries, the group faces questions over its ability to deal with the latest round of crises.

Overhanging the summit in Buenos Aires, the Argentine capital, is a trade dispute between the United States and China, the world’s two largest economies, which have imposed tariffs on hundreds of billions of dollars of each other’s imports.

All eyes will be on a planned dinner between Trump and Chinese President Xi Jinping on Saturday to see whether they can make progress toward resolving differences threatening the global economy.

Beijing hopes to persuade Trump to abandon plans to hike tariffs on $200bn of Chinese goods to 25 per cent in January, from 10 percent at present.

“We hope the US can show sincerity and meet China half way, to promote a proposal that both countries can accept,” Foreign Ministry spokesman Geng Shuang told a briefing in Beijing.

Speaking in Buenos Aires, US Trade Representative Robert Lighthizer said he would be surprised if the dinner was not a success, but it would depend entirely on the two presidents.

On the eve of the summit, G20 member nations were still trying to reach agreement on major issues including trade, migration and climate change that in past years have been worked out well in advance.

Trump’s skepticism that global warming is caused by human activity has raised questions about whether the countries will be able to reach enough consensus on climate change to include it in the summit’s final communique.

Earlier this month, officials from countries attending a major Asia-Pacific summit failed to issue a joint statement for the first time after the U.S. delegation clashed with China over trade and security.

However, delegates to the talks in Buenos Aires said good progress had been made on economic sections of the statement overnight. Argentina’s presidency voiced optimism consensus would be reached on a draft.

“As this is a difficult moment for international cooperation, I would like to appeal to the leaders to use this summit … to seriously discuss real issues such as trade wars, the tragic situation in Syria and Yemen and the Russian aggression in Ukraine,” European Council President Donald Tusk told a news conference in Buenos Aires.

Highlighting the deep rifts within the G20, Tusk said the European Union would extend its economic sanctions on Moscow next month, after Russian ships fired on Ukrainian ones in the Sea of Azov last week, seizing the boats and sailors.

Trump cited Russia’s seizure of the ships as the reason he canceled a planned bilateral meeting with Russian President Vladimir Putin, where they had been expected to discuss the US leader’s threat to withdraw from the Cold War-era Intermediate-Range Nuclear Forces treaty.

However, Moscow said U.S. domestic politics may have been the real reason behind the cancellation after Michael Cohen, Trump’s former longtime personal lawyer, pleaded guilty on Thursday to lying to Congress about a proposed Trump Organization skyscraper in Moscow.

The presence of Crown Prince Mohammed bin Salman at the summit also raised an awkward dilemma for leaders. Saudi Arabia’s de facto ruler arrived under swirling controversy over the murder of Saudi journalist Jamal Khashoggi in the Saudi consulate in Istanbul in October.

British Prime Minister Theresa May said she would be robust when she talks to Prince Mohammed, urging him to hold a full and credible investigation into Khashoggi’s killing and hold those responsible to account.

Uncertainty prevailed about how Trump, known for his unpredictability, would behave at what was shaping up as one of the group’s most consequential summits.

Trump rejected a statement by fellow leaders of the G7 industrialised economies at a summit in May after a tense gathering ended in acrimony, again over tariffs and trade.

Before heading for Buenos Aires on Thursday, Trump said he was open to a trade deal with China, but added, “I don’t know that I want to do it.”

Global financial markets will take their lead on Monday from the outcome of the Xi-Trump meeting, having seesawed in recent days on concerns trade tensions could escalate.

Oil markets will also be closely watching a bilateral meeting between Putin and Crown Prince Mohammed on Saturday afternoon for any sign of a breakthrough in a deal for Russia to participate in a production cut by the OPEC oil cartel next month.

In another bilateral meeting on Friday, French President Emmanuel Macron will discuss the Renault-Nissan alliance’s future with Japanese Prime minister Shinzo Abe, seeking to defuse a brewing diplomatic row over the balance of power inside the partnership.

One bright spot in Buenos Aires on Friday before the summit opened was the signing of a revised US-Mexico-Canada trade pact to replace the North American Free Trade Agreement.

Signing the agreement alongside Canadian Prime Minister Justin Trudeau and Mexican President Enrique Pena Nieto, Trump said he looked forward to working with the US Congress to complete the terms of the deal and did not anticipate problems in passing it.

The three countries agreed a deal in principle to govern their trillion dollars of mutual trade after a year and a half of contentious talks concluded with a late-night bargain just an hour before a deadline on Sept 30.

However, Trudeau took advantage of the signing ceremony to say the partners needed to keep working to lift tariffs on steel and aluminum.

Spurs are not title contenders, says Pochettino ahead of derby