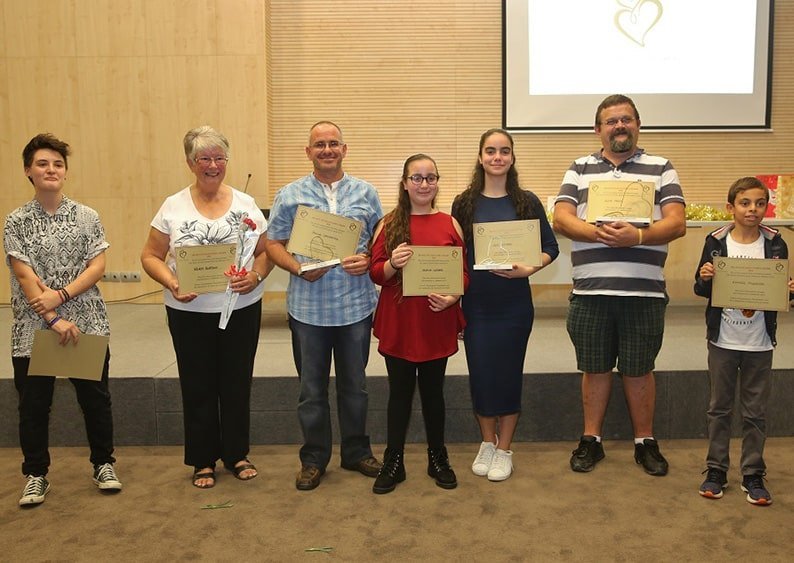 Humanity, courage, caring and philanthropy were all awarded at the 2018 Hearts of Gold Cyprus Awards held in Paphos on Saturday.

The winners were announced at a packed ceremony at SEK in the centre of Paphos; there were gifts and sweets for the children and a finger buffet and drinks for nominees and their guests.

They started an initiative to collect old and used spectacles. They then went to a number of places in Zimbabwe, where people queued for hours, and distributed hundreds of spectacles, money and donated computer tablets. The girls will continue with their endeavours.

Panicos Chrysanthou was awarded the Heart of Gold Cyprus Award to a standing ovation, for the care, kindness and friendship he has shown to hundreds of cancer patients and their families as the driver of the PASYKAF free bus service for cancer patients travelling to other towns to receive treatment.

Panicos, who has been nominated a number of times before but never won, said that he was ‘delighted’ to have been chosen.

Ashleigh Phillips,18, won the Jasmitha Award for Courage. She has coped with some personal difficulties and now dedicates her time to helping the dogs at Paws Dog Shelter.

Alan Mack, who has cancer and is currently in hospital, was represented by his son Ian, and was given the Heart of Gold Lifetime Achievement award. He has worked tirelessly to raise in excess of €95,000 for Cyprus charities.

Honorary Mentions went to 9-year-old Antonis Pissarides, a young humanitarian and environmentalist who created his own popular reusable bag which has been on sale in support of the Rhea Foundation to help build a school, and for deprived Maasai children in Tanzania.

The youngest nominee, Zoe Dhull, aged 5, also received an Honorary Mention, she underwent a lifesaving heart operation in Israel when she was a small baby.

Wendy Burdon was recognised with an Honorary Mention for her philanthropy and support of refugees and women facing domestic abuse.

Joy and Martin Collins also received an Honorary Mention for their volunteering and humanity and finally, The Dr. Yiota Demetriou Dancing Queen Foundation, for their efforts to improve children’s psychological health and well-being.

Patron of the awards Charalampous Theopemptou said it was an honour to be involved with the awards, which are unique, and important for Cyprus.

“There is nothing else like this in Cyprus, and it’s a wonderful way to say thank you to you all. I’m honoured to meet you and be among you,” he said.

Entertainment was provided by the Learning Refuge children, the International School of Paphos Junior Choir, and dance ensemble, Romiosini.

All of the nominees received a certificate and a flower presented by the British High Commissioner, Stephen Lillie, British Vice Consul, Christina Smith, and members of the judging panel and municipality.

The adult and junior winners were given a hand-crafted solid gold heart on a pin, created by Aphrodite Jewellers in Paphos and a number of other prizes, including a bouquet of flowers and a hamper of handmade treats by Joulietta Chocolatier. The adult winner was also given a weekend break with dinner at Almyra Hotel.
Renowned Cypriot artist Yiota Ioannidou created a Lifetime Achievement award and versions for the Junior, Adult and Jasmitha Awards, which are all supported by DCS-Durable concrete solutions Cyprus. Kivotos Gallery supported the Jasmitha award for Courage.

The Hearts of Gold Cyprus Awards celebrate philanthropy, humanity, volunteering and caring and recognise both children and adults from all over the island.

Trump and Xi poised for high-stakes summit over trade war