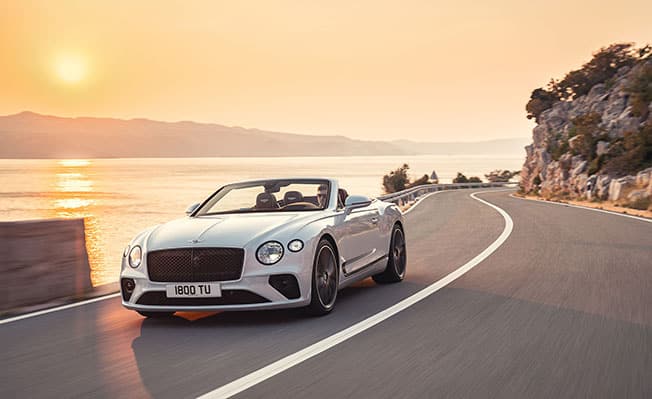 It features a tailored convertible roof that can be deployed or stowed in just 19 seconds, even when the car is travelling at speeds of up to 50 km/h. This transforms the convertible “from a luxurious coupe into an open-top Grand Tourer at the touch of a button”.

Seven different fabric hood colours are available, including an authentic tweed finish for the first time.

A newly designed neck-warmer (which is both warmer and quieter than in the previous model), is integrated into the heated Comfort Seats, optimising efficiency and airflow around the electrically adjustable headrests. Combined with a heated steering wheel, seat heaters and new heated armrests, these features aim to create a ‘luxurious driving experience’ in all environments.

The new powertrain uses the latest engine management technology to produce 635 PS (626 bhp) and 900 Nm of torque, and acceleration to 100 km/h in 3.8 seconds. Top speed is 333 km/h. Start-Stop technology features and Bentley’s advanced application also makes coasting possible. The engine rests not only when the vehicle is stationary but also at near-to-stop speeds.

The dual-clutch eight-speed transmission provides ‘smooth acceleration and impressively quick gearshifts’. Bentley’s Variable Displacement system shuts down half of the engine under certain conditions. Intake and exhaust valves, fuel injection and ignition are all shut down on defined cylinders, with the engine running as a six-cylinder for improved efficiency.

The new car also showcases major evolutions in Bentley’s application of technology. An advanced, fully digital, driver-focused instrument panel and Bentley Rotating Display for the driver are among the innovations. The latter features a 12.3-inch touchscreen housed in a three-sided unit, which revolves from pure veneer to reveal either a touchscreen or three analogue dials – “offering customers the option of a digital detox when desired”.

This third generation Continental GT Convertible retains the elegance and style of its forebears. Its body is more sculpted and the profile is longer and lower than its predecessor due to the front wheels being positioned 135 mm further forward. This has allowed the bonnet to be extended and the nose to be lowered.

The latest LED Matrix technology is used for the lighting, with headlamps “inspired by the finest cut-crystal glasses, the internal surfaces are transparent with sharply defined edges that catch the light like a diamond”.

Over 10 square metres of sustainably sourced wood is used in the cabin along with highest-quality leathers. The dashboard is styled by long, flowing wings that mirror the shape of the Bentley badge.

The centre console is finished to match the lower fascia, and new types of luxurious haptic finishes adorn the interior. In some areas, pillow knurling replaces the traditional mechanical knurling, “for a softer, more refined feel on switches and controls, while diamond knurling adds a luxurious touch using a detailed three-dimensional faceted surface”.

There are 20-way adjustable Comfort Seats with centre panels that allow maximum efficiency for the ventilation, heating and massage functions, while the adjustable bolsters retain the Bentley quilting.

Customers can choose from three audio systems: the standard system features 10 speakers and 650 Watts, while a Bang & Olufsen 1,500 W, 16-speaker system with illuminated speaker grilles is also available, along with a Naim 2,200 W, 18-speaker system with Active Bass Transducers built into the front seats and eight sound modes.

When the engine start button is pressed, the veneer in the middle of the dashboard glides forward and rotates to reveal the touchscreen, with a customer-configurable home screen able to display the driver’s preferred functions, for example, navigation, media and telephone.

The Z-fold convertible roof system is a major improvement both in terms of refinement and packaging. With sealing system improvements and acoustic treatments, it contributes to a three-decibel reduction in overall noise levels compared to its predecessor at typical cruising speeds.

Through Bentley’s Drive Dynamics Control different modes can be selected: Comfort mode, Bentley mode or Sport mode; the suspension, engine, gearbox and other chassis systems will modify to match the selected drive mode. Alternatively, the driver can personalise his or her own dynamic settings.

The air suspension on the new Continental GT Convertible uses three-chamber air springs which give the car 60 per cent more air volume in the softest setting than the previous model. This allowed Bentley’s engineers more scope for tuning the suspension to improve the ride comfort and dynamic character of the car. The system offers the scope to vary from sporting spring stiffness to luxury limousine refinement depending upon which mode the driver has selected.

As a foundation for this impressive handling, the Continental GT Convertible boasts a body-in-white structure that manages to be both stiffer and lighter than its predecessor. This five per cent improvement in torsional rigidity and 20 per cent reduction in structural weight are achievable thanks to the intelligent utilisation of aluminium and high-tensile steel in the platform.

Another key feature is the latest-generation Continuous Damping Control (CDC), which constantly adjusts the damper forces to optimise comfort. The system continually measures the velocity and distance between the wheels and the body at each corner and also adjusts the air volume in the springs if necessary, to ensure the optimum balance of comfort and handling. Both front and rear axles are made of lightweight aluminium, with multilink design at the front and rear.

The braking system is the most powerful iron system ever fitted to a Bentley, with a total of 28 pistons. Front calipers feature ten pistons each, while rear calipers contain four pistons each.

From the very beginning of the design phase Bentley worked with Pirelli to create bespoke tyres for the new Continental GT Convertible. The car runs on Pirelli P Zero tyres, using a different tyre size front and rear for the first time, which the makers say enhances dynamic ability.

The P Zero tyre fitted to the Bentley also has Pirelli’s Noise Cancelling System which reduces road noise coming into the cabin. At the same time, rolling resistance is also improved, creating less friction against the road without compromising grip. As a result, both wet and dry grip are improved, with a noticeably reduced risk of aquaplaning.

Merseyside derby will be my toughest yet, says Klopp