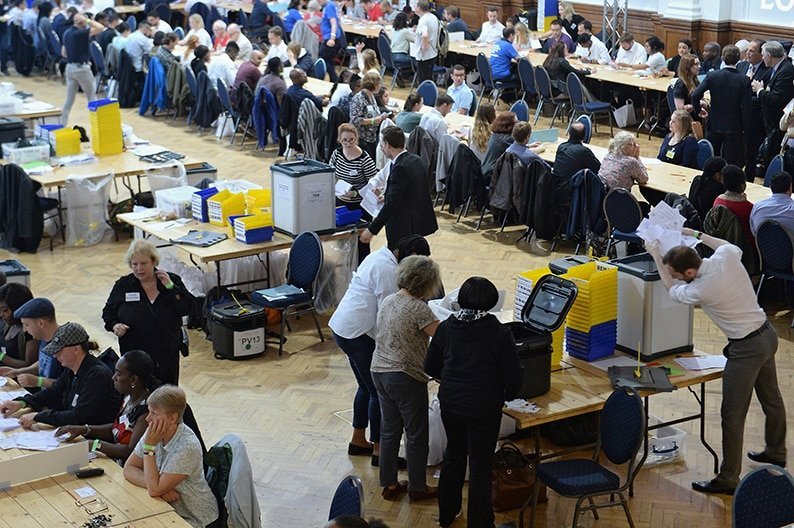 Counting the votes in the Brexit referendum in June 2016

WHY ARE British MPs prepared to risk chaos in order to leave the EU, asked a highly respected German journalist from Die Welt last week in a report called the Madhouse by the Thames. Good question to which the superficial answer is because there was a referendum and 17 million people voted to leave in an in-out referendum as against 16 million who voted to remain.

With the benefit of hindsight, an even better question is whether a referendum on membership of the EU should have been held at all. The trouble with Brexit is that it came about after an in-out referendum that is itself an alien mechanism frequently used by the EU abusively. The British had other much more effective ways of exercising their right to self-determination.

As the father of the House of Commons and ardent pro-European, Kenneth Clarke QC, said many times, having an in-out referendum to decide a problem as complex as leaving the EU was daft. Referendums were frequently used by colonial peoples in the exercise of the right to self-determination but did not suit the most politically sophisticated electorate in the world with a long tradition of parliamentary democracy.

Referendums fly in the face of representative government. In advanced democracies referendums are only efficacious when used to resolve relatively simple local dilemmas that lend themselves to yes or no alternatives. Both prime minister Harold Wilson in 1975 and David Cameron in 2016 decided to have referendums on Europe for tactical party-political purposes rather than because they believed that leaving Europe would be good for Britain.

Major policy shifts like Brexit need first to be adopted by a major political party in its election manifesto containing a package of other policies coordinated and fully costed. Such policies have geo-strategic implications that are best left to elected representatives. The complexity of the withdrawal agreement shows these things are outside the purview of the average voter.

A government elected with a Brexit mandate would have gone to Brussels and said this is our mandate and these are our withdrawal terms. We want out in accordance with our manifesto upon which we are united and upon which we have just been elected.

But we are where we are. Both major political parties are riven down the middle primarily because leaving the EU is not a party-political issue. It is a national issue that transcends party politics. It has divided the people and the unity of the kingdom.

It is now for parliament stripped of all political allegiances to step up and be counted – literally and metaphorically. Theresa May agreed a compromise that respects the referendum result to leave the EU.  Given the limitations inherent in referendums, and the fact that Brexit was not a manifesto commitment of any political party, the prime minister has been right to emphasise that whatever else, Britain will leave the EU because in years to come the minutiae of withdrawal will all be forgotten except for the fact on March 29, 2019 Britain left the EU.

In historical terms the 2016 referendum result was the penultimate move in an end game that began when the EEC became a political union in 1992 under the Treaty on European Union signed at Maastricht.

To understand Britain’s aversion to political union it is necessary to recall that before she joined the European Economic Community (EEC), Britain had been an empire that was so big it had its own colour on world atlases. It was coloured pink and had reached its zenith as recently as 1925 when Cyprus became a Crown Colony. Britain ruled huge territories as well and the waves in between her vast empire that covered one quarter of the earth’s land mass. Not only that but she had also been on the winning side in many wars against key powers on the continent of Europe.

It is true that the sun had set on the British Empire by the time she joined the EEC in 1973 but the mindset of the British people was still a work in progress. Much like the mindset of the Golden Age of Classical Greece has yet to set for most Greeks 2500 years after its acme, the British are no different and may be forgiven a little irritation with EU apparatchiks like the EU’s Donald Tusk and his silly pop-song English and condescending tone.

When France, Germany, Italy and the Benelux said never again to war and signed the treaty of Rome that set up the EEC in 1957 Britain stayed out of her own volition.  She was then denied entry twice in the 1960s by General Charles De Gaulle – partly in revenge for the humiliations he endured in London during the war in the hands of Winston Churchill.

When accused of saying he wanted Britain to join stripped naked after his second veto De Gaulle said mysteriously: “For a beautiful creature, nakedness, is natural enough. For those around, her it is satisfying enough. But I have never said that about England.” He then explained that he had vetoed her entry because Britain was not ready to join the solid inter-dependent and assured society of the EEC: touché mon Général.

By1973 General De Gaulle was out of office and the UK joined the EEC as an economic enterprise, although the treaty of Rome made it clear that the aim was political union.

Unlike East Europe and Greece, Britain had no pressing political need to join. Her aim was to have frictionless access to trade within the Common Market and was happy to pool economic sovereignty. But England had had parliamentary government since the Glorious Revolution of 1688 and had no intention of surrendering political sovereignty to the EU.

The last strictly economic treaty passed by the EEC, however, was the Single European Act (SEA) of 1986 that set up the single market, signed by Margaret Thatcher, Britain’s most eurosceptic prime minister. All the treaties after the SEA from the treaty of Maastricht in 1992, the treaty of Amsterdam in 1997 right through to the treaty of Lisbon in 2007 were primarily concerned with achieving a closer political union.

Britain felt isolated and cornered and became difficult and awkward. She did not join the eurozone and became a semi-detached member long before Brexit. She had earlier secured an EU budget rebate and a number of opt-outs notably from the Schengen border-free area and from Justice and Home Affairs.

Paradoxically Britain allowed freedom of movement of persons after the 2004 enlargement that allowed a huge influx of East Europeans without availing herself of the benefit of a transitional period, compounding an already existing immigration problem that existed since the Commonwealth Immigrants Acts 1962-1968. Tony Blair, who was prime minister at the time and who has been campaigning for Britain to remain, now says that most EU states understand Britain’s immigration concerns but has not provided a satisfactory explanation for Britain’s failure to avail herself of transitional provisions designed to help local people adapt to freedom of movement gradually.

In the end people voted to leave because the EU was not what they bargained for and because EU freedom of movement of persons lets too many migrants into countries like Britain. Both these issues are catered for in the withdrawal agreement.

So to answer the German journalist from Die Welt, British MPs are not really prepared to risk chaos to leave the EU.  To the British their parliament, like the world, is a stage and these things have to play out in the Madhouse by the Thames. There will be no chaos.

Partition would throw us into the abyss