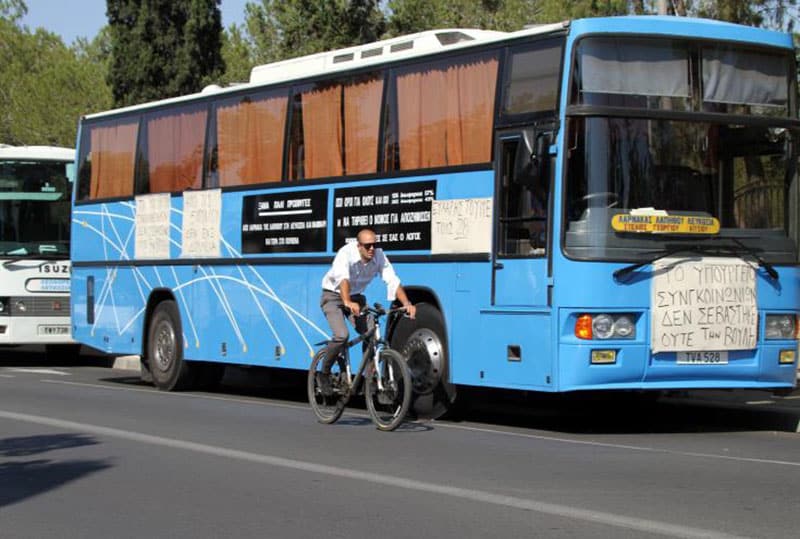 Bus drivers in Paphos and Limassol will proceed with a strike from 6am on Monday, while the transport ministry said on Sunday payments will be made by it on Monday to bus companies in other areas so that employees could be paid.

Around 5,000 school children and 3,500 other bus passengers are expected to be affected by the strike in Paphos, representative of the town’s bus company Osypa drivers Christos Evengelou told the Cyprus News Agency.

Evangelou said the drivers had not been paid because the government had not made its contribution to the company.

The director general of the transport ministry, Stavros Michael said that payments to bus companies in Nicosia, Limassol, Larnaca and Famagusta will be made on Monday.

In this way, he said, he hoped that strikes by bus drivers could be avoided. “At the ministry we are all hopeful that we can manage this,” he said.

Representatives of Sek and Peo unions said the non payment of wages for November was only one of the many and serious problems facing Emel employees, who are determined to sort out the problems. They are expected to gather on Monday morning at the station outside the old hospital.

Earlier on Sunday the Emel board held a meeting to examine their financial standing and said their problems were caused by a reduction of 50 per cent in the amount of money they received from the government for October and November.

Late on Saturday the Larnaca bus company Zenon had said it would not strike on Monday but would give the ministry until the end of the day to make the payments before making a decision on further measures.

Michael said the ministry had asked Nicosia bus company Osel to resubmit some figures which will be looked at during the week to see if there were any mistakes made before proceeding.

Negotiations with the Famagusta bus company Osea started last week and the ministry is expecting a report from them about their figures.

Michael said Osypa had rejected taking the dispute to arbitration, and called on the company to enter into direct negotiations with the ministry, which it has invited it to many times.

“For eight years, since the day the agreements came into affect the ministry of transport has violated and destroyed the agreement,” Osypa president Giorgos Ioannides said.

He said the current minister is the sixth minister of transport who has been unable to solve the problems on the buses.

He also questioned how the ministry could come after eight years and say it has overpaid the bus companies; is it possible that they all made the same mistake?

He said that in 2017 the ministry paid the company only a quarter of what is was due, while in 2018 it has paid for two months and nothing since. Because of this, he said, the company is unable to make November, December and 13th salary payments to staff.

Michael said the ministry is waiting for a letter from Paphos bus company Osypa to start negotiations with it.