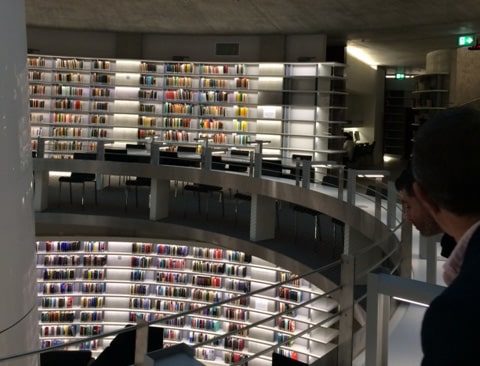 An impressive 470,000 books and 80,000 periodicals have now been moved to the new library of the University of Cyprus, while the new learning resource centre ‘Stelios Ioannou’ opened its doors on Monday at 10am.

The official inauguration will be on Wednesday morning, though it will not be the grand opening originally envisaged, which French President Emmanuel Macron was going to attend. This had to be postponed because of a strike by the workers at the library.

Completing the centre has been a mammoth task as books were collected from five different places, which means the logistics were complicated.  It has also taken seven years to build since the cornerstone of the new building was laid back in 2011.

“it was a challenge, but now most of the work is done,” acting library director Elena Diomidi told reporters on Monday.

The library will be open for all, not just university students and lecturers. External members just have to pay a small yearly charge to become members. For one person, the yearly charge is €25, but there are cheaper subscriptions available for groups and families.

To make sure the children are not left out, there is a children’s collection, something that didn’t exist in the old library.

“This was for several reasons,” Diomidi said. “We want to encourage a book culture, also PhD students doing research are often married and bring their children, and we will work with schools to bring their pupils as part of the curriculum.”

The project, which cost €33 million, became possible due to a major donation of €8 million from Elli Ioannou in memory of her late husband Stelios Ioannou. At her request, the design of the project was assigned to renowned French architect Jean Nouvel, who visited the university before starting to work on the design.

After he saw the surroundings, he decided on shaping the building like an artificial hill similar in shape to the adjacent typical hills in the area.

A reinforced coated fabric membrane covers the entire surrounding slopes with a strip of vegetation at mid-height, enhancing the ambiguous aspect of this ‘hill’ between natural and artificial.

“The fabric becomes a sun screen device on the exposed façade of the building,” architect Philippos Ioannou explained.

Inside, a basic cylinder forms the centre on all five floors. Three wings lead out from the cylinder which contain offices and other rooms used mainly by staff.

Leading out from the central cylinder are also 30 study boxes, small rooms students can use for group projects. These glass boxes have desks for four to six persons.

Part of the building is also a computer lab, plus there is a language centre and an amphitheatre for up to 100 people.

Not all the work has been done as some smaller collections such as the rare books still need to be moved to the new premises.

Woman wanted for abduction of minor