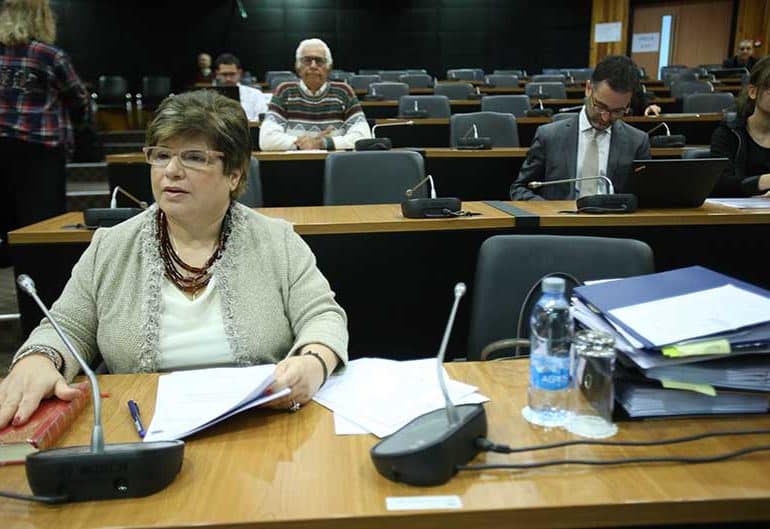 The head of the Cyprus Central Bank (CBC) on Monday said she had had to stop looking into bad loans held by Politically Exposed Persons (PEPs) because she “got scared” when police seized her computers and questioned her.

In parliament, Chrystalla Georghadji recalled that in 2015 she began gathering data on PEPs who had bad loans with Cypriot banks.

In March of that year, someone leaked to the press a list of MPs and their loans at Bank of Cyprus.

At the time, furious MPs spoke of an attempt by the Central Bank to blackmail lawmakers through leaks to the press with information about their loan arrears.

In May, following a complaint filed by independent MP Zaharias Koulias that his personal data had been violated, police entered the Central Bank with warrants to search the premises.

According to Georghadji, when she went to her office one day she found a yellow police tape plastered around it.

“The police told me they were seizing my computer. It is a serious matter, there was a criminal investigation, and my mea culpa was that perhaps I got scared.”

She was later deposed by the CID.

Her computer was subsequently returned to her when none other than Mario Draghi, head of the European Central Bank, intervened on her behalf.

“At the time there was a great deal of controversy, there was such hatred directed against me,” Georghadji said.

“Prior to that, as auditor-general, I had the public’s esteem but then, after I began to check the NPLs of Politically Exposed Persons, society turned on me. I still resent that.”

The Central Bank chief said she was now willing to resume her investigation.

“If you agree,” she told legislators, “I shall go back to my office right now and send a circular to the banks instructing them to give us this data [on PEPs].”

MPs were unmoved, some accusing Georghadji of smoke and mirrors.

Diko’s Angelos Votsis said there was no need for Georghadji to issue a circular to banks. Instead, the Central Bank boss could simply hand over what data she had directly to the House speaker, and parliament would take it from there.

The Greens’ George Perdikis said Georghadji was playing the victim card in order to deflect criticism of her weak leadership.

“It’s a distraction move. Ms Georghadji is the great absentee. She was absent from the issue of the co-operative bank, absent in the matter of the sale of loans [to third parties].”

Earlier, the Central Bank chief had dropped another bombshell out of the blue. She told the House finance committee that there are questions surrounding the legal status of the asset management company (known as Sedipes) recently set up to absorb the bad loans on the legacy co-op’s balance sheet.

The co-op’s performing loans and deposits were transferred to Hellenic Bank.

“I have to admit that the finance ministry is trying together with us to resolve this problem,” she said of the tenuous legal status of Sedipes.

MP were riled that this was the first they were hearing of the issue, some suggesting the government had tried to cover it up.

Elaborating on the NPLs in the Cypriot banking system, Georghadji spoke of a significant reduction in bad loans during 2018.

In addition to the €6.8bn in bad loans removed from the system as a result of the co-op-Hellenic transaction, Hellenic sold €144m in bad loans to Β2Kapital. In addition, Bank of Cyprus was poised to complete the sale to a third party of €2.8bn in NPLs by the end of the year.

But despite the progress, the stock of NPLs still remained high, accounting for as much as 30 per cent of all loans on banks’ portfolios.

And although NPLs may have been scrubbed off banks’ balance sheets, these loans have not disappeared.

“Rather, they remain in the real economy, in terms of private debt which currently stands at 220 per cent of GDP,” Georghadji warned.

The banker recalled previous assertions she had made, to the effect that it might take up to five years for NPLs to drop to acceptable levels.

“In retrospect, and according to guidance issued by the ECB, it appears we’ll need 10 years at least to solve the NPL problem,” she remarked.

On the state of the economy in general, Georghadji cautioned against complacency in the management of public finances amid improving fiscal conditions and in particular the increase in public revenues.

Her warnings came as ruling Disy together with Diko in co-operation with the government, are working on a package of incentives for consistent borrowers, increases in low pensions and a reduction in consumption tax on fuel, totalling around €100 million.

“Positive developments in public revenue should not lead to complacency and unreasonable increases in government spending. The public debt is still very high,” she said.

She also referred to the checks being conducted by the Council of Europe’s Moneyval Commission on money laundering, noting that a poor evaluation could have “multiple impacts” on Cyprus.