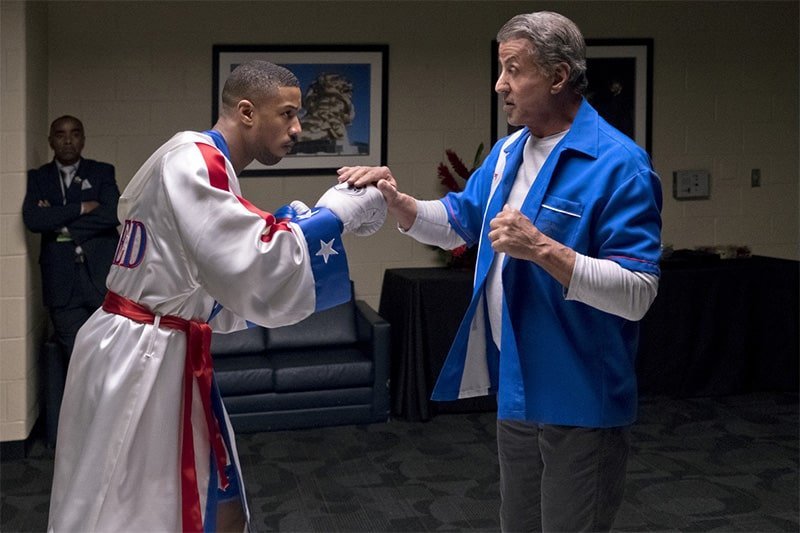 Adonis Johnson (Michael B. Jordan) is about to fight his toughest opponent ever: franchise fatigue. To be honest, I’d be happier if Creed II didn’t exist, just because the original Creed (2015) was such a happy surprise – such a rich, emotive crowd-pleaser – that it’s a shame to have it sullied by a sequel. The good news is that there’s unlikely to be a third film. Not only is Jordan among the biggest stars in the world after Black Panther (directed by Ryan Coogler, who also made Creed but is merely an executive producer here), hence reluctant to get bogged down in threequels – but there’s also not much left of the Rocky franchise to cannibalise, unless they can somehow find space for Clubber Lang from Rocky III.

Creed modelled itself on the first Rocky, being streetwise and authentic; Creed II jumps forward to Rocky IV, the 1985 Cold War fantasy in which Soviet boxer Ivan Drago clobbered US champ Apollo Creed so hard he actually killed him, right there in the ring. Rocky Balboa (Sylvester Stallone, natch) took care of business on that occasion – but now Adonis, Apollo’s son, is called upon to fight a rematch with Drago’s son Viktor, who’s being coached by his father (Dolph Lundgren) and has been raised to be little more than a wild beast. “My son will break your boy,” growls Ivan to Rocky, fathers and sons being a big, big part of this movie.

Relations haven’t thawed between the two men, despite Stallone and Lundgren being equally beloved 80s icons – their one conversation is tense and guarded, albeit with a flicker of mutual respect – but it’s one of the grace-notes in Creed II that Drago Sr is a sad figure, pushing Viktor’s bout in a rather pathetic bid to rehabilitate himself (his life unravelled after losing to Rocky). The film, like its predecessor, takes care not to be overly gung-ho and triumphalist, which of course makes its triumphal moments – heralded by ‘Gonna Fly Now’, the immortal, pulse-pounding Rocky theme – all the more exhilarating.

Then again, one man’s exhilarating is another’s ‘I saw that coming’. Let’s make it clear that Creed II is predictable – not just vaguely familiar but totally, absurdly formulaic. You count off the beats, and they duly arrive. The same was true of Creed, in some ways, indeed I often found myself raving about that film to people who couldn’t see what the fuss was about – because its glory wasn’t in the plot, it was in the characters, and the fervent way it imagined boxing as a painful but necessary process (‘redemption’ is putting it too grandly) for damaged people working through their issues.

“Look in the mirror, that’s your toughest opponent,” Adonis was told in Creed. “He’s in a place right now that only he can get himself out of,” muses someone in the sequel. The point is the same in both cases, boxing as a kind of existential quest – a way to find peace through violence, and strength through acceptance of pain. (“He’s taking a lot of punishment!” marvel the commentators in the spectacularly gruelling final fight.) This Zen masochism is potentially maudlin – but the franchise has been lucky with its stars, especially Jordan who’s consistently incredible. His eyes are laser-focused when angry, so expressive when he’s proposing to Bianca (Tessa Thompson), his body language charmingly flustered when she’s taking a pregnancy test. The test is positive, and in due course a child is born – speaking yet again to the film’s abiding theme, the importance of fathers.

There’s Apollo Creed, of course, bossing the plot from beyond the grave. There’s long-winded, loveable Rocky (Stallone’s conception of the role is increasingly the endearing old man who strikes up conversations with strangers in dentists’ waiting rooms), a father figure to Adonis – though also a dad with his own, estranged son, and a grandson he’s never even met. There’s Ivan Drago, a bad dad in pushing his son for his own nefarious purposes – though his love comes through in the end, even so (Lundgren, a much better actor than he’s given credit for, lends Ivan a chilly dignity). And of course there’s Adonis himself, initially consumed with rage which of course is no way to win fights – but then he becomes a father, and brings his baby daughter to the gym and slowly, steadily gets his mojo back. “Now you know what you’re fighting for,” says Rocky wisely.

It took a while for Creed II to grow on me. It’s mushy, not as intense as the first film, and soooo predictable. Yet the fights are impressively visceral, the actors almost as fine as they were in Creed – and the sequel shares a bit of the same DNA, that bruised sense of people pushing against their limitations, struggling to play a bad hand, finally seeking catharsis (or death) in the boxing ring. “It all feels so… Shakespearean!” claim the commentators. Didn’t Hamlet have daddy issues too?