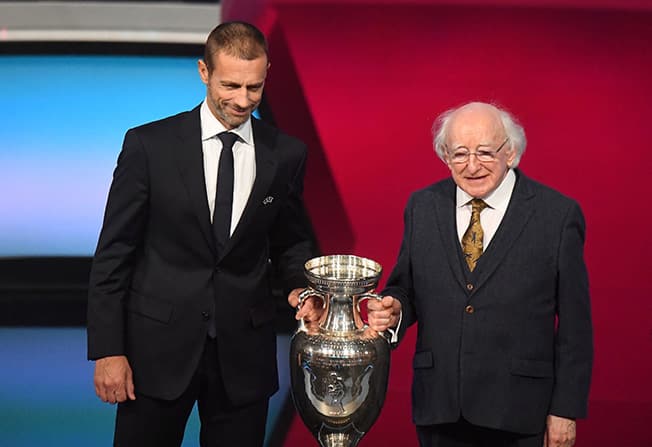 UEFA President Aleksander Ceferin and Ireland President Michael D. Higgins pose for a photo with the trophy after the draw

The Netherlands and Germany were grouped together in qualification for the 2020 European Championship at Sunday’s draw in Dublin, one of 12 host cities for the finals that will be staged across the continent for the first time.

Germany, the team everyone wanted to avoid after their poor showing in UEFA’s new Nations League competition pushed them into the second pot of seeds, will also play Northern Ireland, Estonia and Belarus in Group C when the qualification competition begins in March.

The Dutch, European champions in 1988, failed to qualify for the last two major tournaments but have been rejuvenated under new coach Ronald Koeman, beating Germany last month on their way to securing a spot in the final stages of the Nations League.

“I wasn’t happy because they are strong, they were the strongest team in the second pot, but Germany are also not happy with Holland, I think,” Koeman, the former Ajax and Everton manager, told reporters.

“I think the rest of the draw is acceptable but with the Germans, it will be a good fight. We know it will be tough to beat them. The development of the team is really positive and we look forward.”

Holders Portugal must face Ukraine and Serbia in a tricky five-team Group B which also includes Lithuania and Luxemburg while world champions France drew Iceland and Turkey in Group H.

Elsewhere three-times champions Spain were drawn in Group F with Sweden, Norway and Romania. England, one of the other in-form teams from the Nations League, face the Czech Republic and Bulgaria in Group A.

The top two teams from each group qualify automatically. Unlike previous tournaments, the playoffs to decide the four other spots will be contested between the most successful teams from the four divisions of the Nations League who have not already qualified.

“I would say it’s a group with three candidates for two places, and Portugal are one of them,” said Portugal coach Fernando Santos.

“We escaped playing Germany… or Germany escaped playing us. You could say the group is less difficult because Germany are not there but that would not be true. Ukraine and Serbia are difficult.”

Hoping to restore his team’s credibility after they failed to qualify for the World Cup, Italy coach Roberto Mancini was also happy to avoid Germany after his side were drawn in Group J along with teams including Bosnia, Finland and Greece.

“A good draw, the aim was to avoid Germany,” he said. “We need to improve and get back to being among the top teams.”

The new format offers a potential back door for any top side that struggles in qualifying, while also handing the leading minnows from the lowest Nations League division — Kosovo, Georgia, Belarus and Macedonia — a crack at the last qualification place.

The finals will take place in 12 different cities stretching from Bilbao in Spain to Baku in Azerbaijan. For the first time in the competition’s history, the tournament will be hosted by more than two countries to mark its 60th anniversary.

No team will qualify automatically as hosts, although every host country that qualifies will be guaranteed two home games in the group phase. A maximum of two host teams were permitted to be grouped together in Sunday’s qualifying draw.

That meant that Ireland, to sighs of relief in the Dublin auditorium, had to be moved out of the Germany/Netherlands group they were initially drawn in, dumping neighbouring Northern Ireland in Group C with the former winners instead.

Yet new Ireland manager Mick McCarthy was not thanking the “person on the computer with a magic finger” for long when he realised his side would still face the relatively daunting task of getting past either Switzerland or Denmark in Group D.

“I don’t see why we should be thinking it’s a damn sight easier,” the returning Ireland manager said.

Thousands without public transport in Limassol and Paphos (Update 1)

Eighth Opap All Star game to be held on December 15