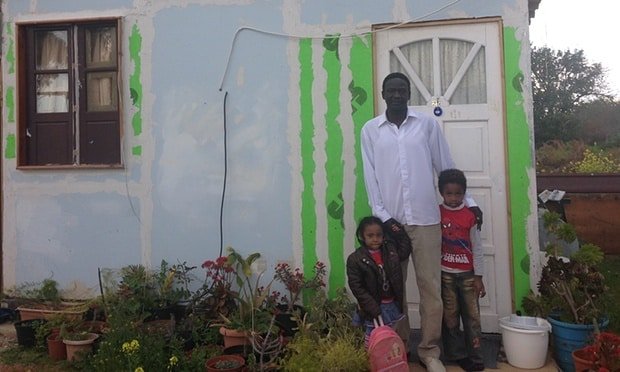 Tag Bashir, one of the six refugee families, with two of his children in Dhekelia

A group of refugees who have been stranded on the British bases in Cyprus for over 20 years have been granted indefinite leave to enter the UK for permanent residence, the law firm representing the families said on Monday.

The group of six families numbering 31 in total have been fighting through the British courts to obtain leave to enter the UK for nearly four years.

Shortly before a final Supreme Court hearing on the case was due to be heard last Friday the British government offered to settle the case by agreeing to grant all the families indefinite leave to enter the UK, the families’ law firm Leigh Day said in an announcement issued late on Monday.

“We are delighted that the current Home Secretary has done the humane thing and agreed to grant our clients and their families leave to enter the UK for permanent residency,” said Tessa Gregory, solicitor at Leigh Day.

The news could not be confirmed by the British bases on Monday night.

In October 1998, the six heads of families were amongst a group of 75 individuals from Ethiopia, Iraq, Sudan and Syria who washed up on the shores off Akrotiri after a fishing boat in which they were travelling to Italy foundered off the coast of Cyprus. Following their arrival, the six were detained by the British military for up to eighteen months as the British determined whether or not they were genuine refugees.

Between 1999 and 2000 the six men and women were released after being recognised as refugees under the 1951 Refugee Convention following a procedure conducted by the Sovereign Base Area Administration in conjunction with the Home Office and the UN Refugee Agency (UNHCR).

The six men and women and their children have remained living on British bases ever since and launched a legal case against the British government in January 2015 challenging the then Home Secretary, Theresa May’s refusal to give them leave to enter in November 2014.

They currently live in disused military accommodation in Dhekelia, living in bungalows which were due to be demolished in 1997.

The UK government denied legal responsibility for the claimants and their families, arguing that that the Refugee Convention was never extended to the British bases and therefore the families had no grounds on which to seek resettlement in the UK.

Expert reports commissioned by the UNHCR in 2013 found high levels of anxiety and depression amongst the families with all children being assessed to have suffered in their “psychological health” due to their living conditions.
In November 2014 the then UK Home Secretary Theresa May refused to consider the claimants for admission into the UK. That decision was subject to judicial review proceedings heard in the High Court in March 2016 which resulted in a court ruling that the decision was unlawful and must be quashed.

The government appealed the judgement to the Court of Appeal, but in May 2017 the Court of Appeal ruled unanimously that the government had acted unlawfully when refusing access to the UK to the claimants. The government was forced to make a new decision in July 2017 following the finding the Refugee Convention did apply to the British bases as a matter of law, but again refused entry to the clients and their families.

The government then appealed again to the Supreme Court, which following a two-day hearing in December 2017 made an interim judgement in July 2018 concluding that the Refugee Convention did apply to the bases and asking the parties to make further written submissions on a number of additional questions.

Just prior to a further hearing at the Supreme Court which was scheduled for 26 November 2018, the government offered to settle the case, without admission of liability by granting indefinite leave to enter the UK to all six claimants and their families.

“The heads of these six refugee families who washed up on a British army base in 1998 were fleeing from terrible conditions in their own countries. Instead of being welcomed into the UK as refugees they have been left in limbo for twenty years,” Gregory said.

“My clients now want to put those wasted years behind them and build a new life in the UK with stability and security. These six families have hope again.”

Tag Bashir, the lead claimant, said he could not express how happy he was at the news.

“We only want to thank everyone who has worked so hard to help us escape this twenty-year nightmare. I cannot express how happy our families are to be given the opportunity to come to the UK and start our lives again.”