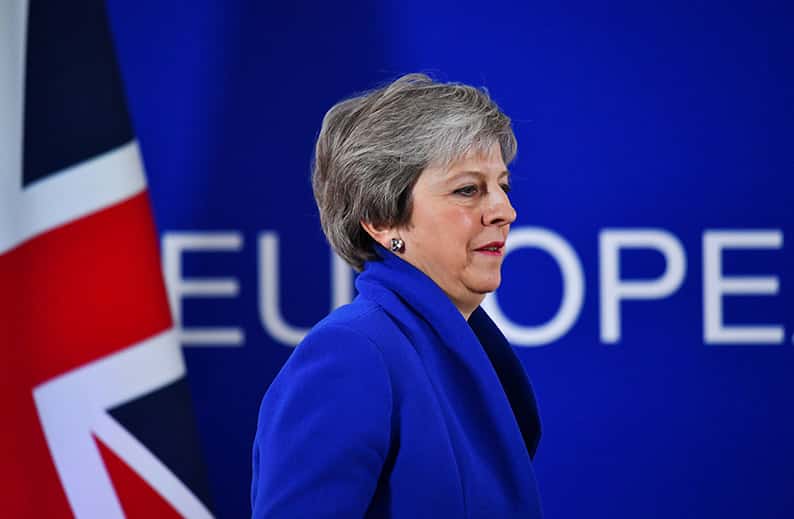 Bank of England Governor Mark Carney denied accusations of scaremongering after the bank said last week that, under a worst-case Brexit, Britain could suffer greater damage to its economy than during the financial crisis of 2008

A senior European Union legal adviser said on Tuesday Britain had the right to withdraw its Brexit notice, opening a new front in a battle over Prime Minister Theresa May’s plans to leave the bloc, which could be rejected in parliament next week.

The advice from a European Court of Justice advocate general emboldened supporters of EU membership in Britain’s parliament on the first of five days of debate on May’s plans to keep close economic ties after leaving in March.

But May has no intention of revoking the notice, her spokesman said, despite facing a daunting struggle to secure parliament’s approval in the key vote on Dec. 11 after her plan was criticised by Brexit supporters and opponents alike.

“The British people want us to get on with a deal that honours the referendum and allows us to come together again as a country, whichever way we voted,” she will tell lawmakers on Tuesday, according to excerpts of her speech.

“This is the deal that delivers for the British people.”

May says if lawmakers do not back her deal, they could open the door to Britain falling out of the EU without measures to soften the transition, or that Brexit might not happen.

The formal advice from an ECJ advocate general – not binding but usually heeded by the court – suggested to some lawmakers that revoking the “Article 50” divorce notice was an option.

“It’s a false choice to say it’s the PM’s deal or chaos,” said Conservative lawmaker Sam Gyimah, who quit as a minister on Friday over May’s deal. “We should look at all the options and not be boxed in by our own red lines.”

Sterling rose on hopes that the court advice would make a disorderly “no-deal” Brexit next March less likely.

But May’s spokesman told reporters: “It does nothing in any event to change the clear position of the government that Article 50 is not going to be revoked.”

The crucial Dec. 11 vote is likely to decide the shape of Brexit. If, against the odds, May wins, Britain will leave the EU on March 29 on the terms she negotiated with Brussels – its biggest shift in trade and foreign policy for more than 40 years.

If she loses, May could call for a second vote on the deal. But defeat would increase the chances of a “no-deal” exit, which could mean chaos for Britain’s economy and businesses, and put May under fierce pressure to resign.

Bank of England Governor Mark Carney denied accusations of scaremongering after the bank said last week that, under a worst-case Brexit, Britain could suffer greater damage to its economy than during the financial crisis of 2008.

He also told lawmakers that British investment was now about 16 per cent below where it was expected to be before the referendum in 2016.

Defeat for May could make it more likely that Britain will hold a second referendum on exiting the EU – which would almost certainly require it at least to defer its departure – three years after voting narrowly to leave.

May, 62, has toured Britain, spent hours being grilled in parliament and invited lawmakers to her Downing Street residence to try to win over her many critics.

But the deal has united critics at both ends of the spectrum: eurosceptics say it will make Britain a vassal state while EU supporters take a similar line, saying it will have to obey the rules of membership while foregoing the benefits.

She also faces a motion by opposition parties and her own nominal allies in the Northern Irish DUP for her government to be found in contempt of parliament for failing to publish in full the legal advice on Brexit that it commissioned.

Her spokesman said the cabinet had discussed the motion on Tuesday but maintained that ministers must be able to obtain candid legal advice “without fear that it will be immediately published”.

More than two years after it voted to leave, the testy debates that shaped the referendum have intensified, dividing Britain and unsettling markets, businesses and foreign residents.

May hopes that if she forces her deal through, firms that have put off investments and made contingency plans for fear of trade drying up will be able to move on.

She says her deal will maintain close economic ties with the EU while enabling Britain to trade more freely with the rest of the world and meet voters’ demands to reduce immigration.

But the deal has done little more than boost opposition at the hardline edges of the debate.

Brexit supporters have vowed to defeat it and threatened to bring May down. Pro-EU lawmakers and the DUP, which props up her government, say they will vote against, and the main opposition Labour Party says it will try to unseat her.

During the five-day debate, the strength of the opposition should become clear when lawmakers make speeches or try to amend May’s motion to approve the deal.