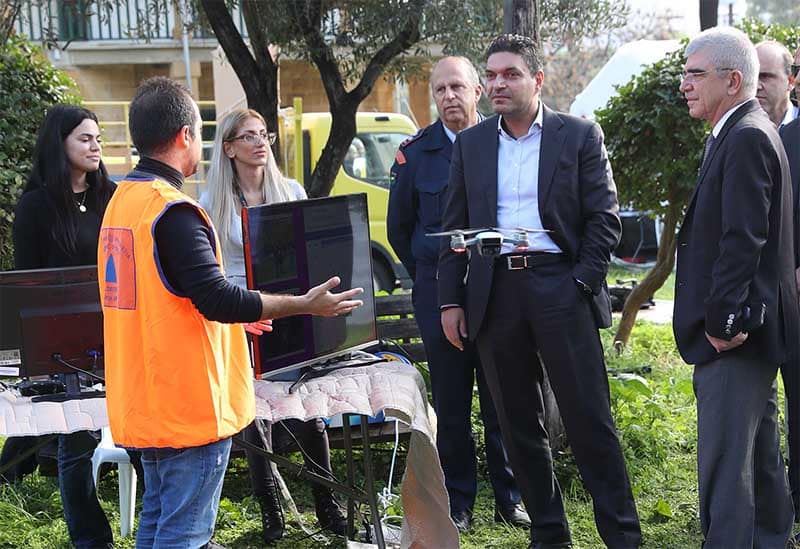 Coinciding with thunderstorms and torrential rain which caused damages in much of Cyprus, the ministry of the interior carried out an exercise on dealing with extreme weather on Tuesday morning.

Prometheus was organised by the ministry in cooperation with the civil defence involving municipalities, the fire service, police, the met office, the water development department and others.

The scenario predicted that a storm hit Nicosia, Limassol and Larnaca, during which 185 millimetres of rain fell and there were winds up to 90 kilometres per hour. As a result there were a number of urban floods while rivers overflowed.

The amount of damage was assessed by a police helicopter and drones of the civil defence.

Head of the met office Cleanthis Nicolaides said that Lysos actually recorded a wind speed of 90 kilometres per hour during Tuesday’s storm. “So, the scenario is not unrealistic,” he said.

Fire services chief Marcos Trangolas said the situation on flooded roads had improved. Crews were pumping rainwater and the process of pumping the water from basements is expected to be completed by Wednesday morning.

Interior Minister Constantinos Petrides thanked the participants for their cooperation.

One of the reasons for the floods on Tuesday was that drains were clogged because leaves were blown off the trees by the strong winds, Petrides said after visiting some of the affected areas.

Commander of the civil defence Andreas Frantzis, speaking at the beginning of the exercise, said it was a useful thing to do.

“It will give us much needed information to update the plans so we do not base our actions on hypotheses or subjective judgments,” he noted.

Asked how the civil defence helped deal with the storms that hit Cyprus on Tuesday, Frantzis said they aided the fire services to remove water and also assisted the district administration in recording the damage.

Syria’s last shadow puppeteer hopes to save his art