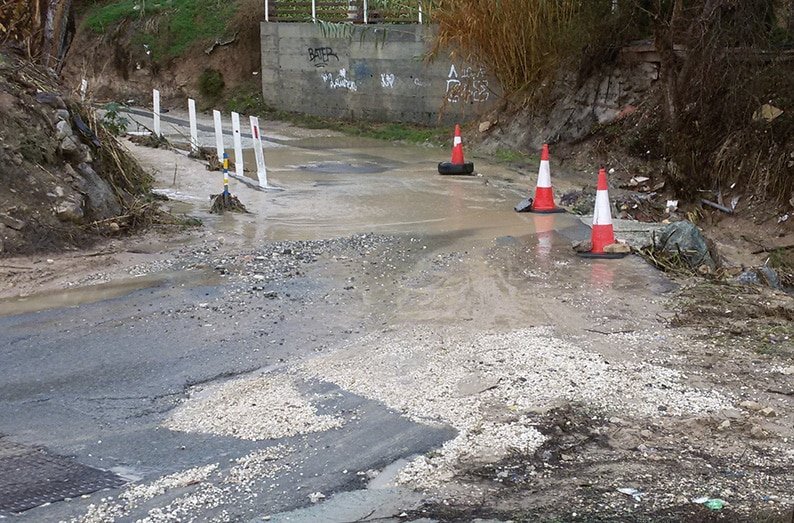 Paphos police are urging drivers to proceed with caution as heavy rain and thunderstorms sweep the district and are forecast to continue until the end of the week.

Although no major incidents have taken place in Paphos, a number of areas are experiencing flooding and rock falls, said the police.

“Drivers must use a slow speed and drive with their lights on and proceed cautiously,” a Paphos police spokesman told the Cyprus Mail.

“Some areas are flooding and have some rocks which have been dislodged by the force of the water, including Timi, Mandria, Koloni and on the highway heading towards Limassol by Kouklia,” he said.

This area is experiencing huge swathes of standing water which is causing problems, he said.

Meanwhile, a spokesman for Paphos fire services said that five crew were out dealing with six or seven incidents around the area caused by the inclement weather.

“These are mostly pumping water out of basements and flooded ground floors, our crews are responding immediately,” he said.

He added that the fire brigade is prepped and ready for further problems which they anticipate during the next 24 hours, as the heavy rainfall continues and a yellow weather warning has been put in place.

The Cyprus Meteorological Office issued a yellow weather warning on Tuesday, to remain in force until Wednesday.

On Tuesday, some areas were already rendered impassable to traffic altogether, due to the heavy rain.

“I live in Chlorakas and driving the back way from Moutallos, a small stream has burst its banks and a huge torrent of water at least two feet high was making the road, which is narrow and on a bend, impassable. Four wheel drives and trucks were turning back, it’s a nightmare as you then have to drive all of the way around and it’s very dangerous,” noted Andreas Christodoulou, a local resident.

Drivers also complained of standing water at various points along Grivas Dighenis Avenue, one of the main roads running through the centre of Paphos.

“There is a lot of traffic and some people are driving too fast and without their lights on, it’s very dangerous,” Sam, a driver from Tsada said.

The Cyprus Meteorological Office issued a yellow weather warning on Tuesday, to remain in force until Wednesday. Forecaster Iasonas Christodoulou issued the localised thunderstorm warning, which is affecting Cyprus, with precipitation exceeding 35 millimetres per hour.